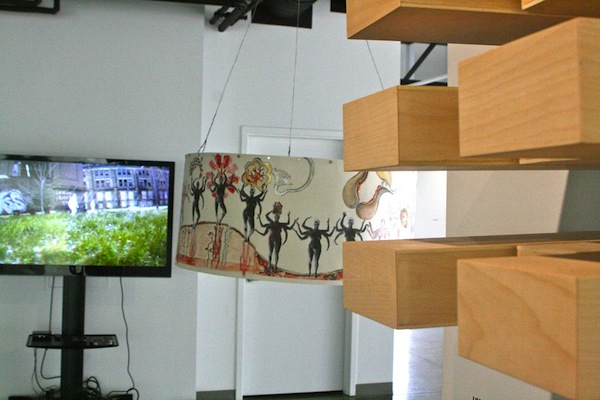 A corner of the Exhibition Initiative's installation in Baron Gallery shows the diversity of media and creativity of form.

Curatorially speaking, group shows — especially those consisting of aesthetically disparate works — pose a host of tricky issues. But when they work, when a thematic convergence is achieved despite aesthetic divergence and lack of medium specificity… boy, are they good.

It is easy to imagine how the student curators of Cross-Listed, an installation of faculty art opened April 14, could have posited the tenuous theme of “Oberlin faculty showing in Oberlin” as the show’s unifying principle, ignoring the aesthetic divergences among the works. But even in a cursory walk through this show, the successful establishment of a complex, sensitive and nuanced dialogue between the works was made loud and clear.

The Exhibition Initiative, responsible for the organization and installation of the show, was founded in 2010 by Martha Moldovan and Anna Poe-Kest, both OC ’11, who first conceived of the Initiative as an opportunity to showcase students’ work on campus and also give students the opportunity to strengthen their curatorial chops by diving into the world of exhibition preparation, installation and execution. During their two years as co-chairs of the group, Moldovan and Poe-Kest successfully oversaw the installation of three exhibitions, their horizons beyond the sphere of student art into the Art library’s collection with their collaborative Mail Art exhibition in November 2010.

Now, under the direction of College junior Thomas Huston and College senior Molly Stein, the group’s ambitions continue to expand as they begin to explore artistic production outside of the Studio Art department. The group produced an exhibition catalogue to accompany Cross-Listed, assigning one writer to each artist. The entries represent a collaboration between faculty and students that created insightful, instructive and thoughtful accounts of each piece displayed in the show. Cross-Listed represents a hugely successful step in this interdisciplinary direction, aiming to “attract and incorporate a broader audience,” as they say in the show’s catalogue.

Including work by 19 faculty members, the show is comprised of a variety of media, some familiar — photography, wood block prints, paintings¬ — and others not: Music stands, sunglasses, rice, beans. Works that have never before been displayed in a gallery appear alongside works that have appeared around the world. To set the show apart even further, Huston said, “Much of the work has never been shown in Oberlin, and certainly none of it has been shown in this context.” Oberlin Professor of Mathematics Bob Bosch, for example, contributed three small-scale, intricate sculptural pieces that explore the connectivity of forms, miniature geometry lessons that nonetheless assert aesthetic value for its own sake, displayed for the first time outside of a mathematical setting.

Each work stands alone with a strong and well-developed sense of identity, but the pieces also communicate with one another in a kind of circumstantially determined dialogue. For instance, Per Bloland, a faculty member in the TIMARA department contributed “Graveshift,” a collaborative video for which he composed the entire score. The video, which ostensibly shows an urban cityscape through a rainy window, becomes a complex feat of animation as the droplets on the exterior of the glass coalesce into anthropomorphic forms whose movements interpret Bloland’s musical score. The chaotic, frenzied representation of the city and the video’s jarring opening sequence, where pixelated partial images flash on screen accompanied by loud instrumentals, frames the urban narrative as disorienting, disruptive and perhaps even tragic, though always beautiful.

In this context, Bloland’s approach becomes an interesting counter-point to Studio Art Professor Sarah Schuster’s “For Now I Know in Part…,” already installed along the north and west walls as part of from The Fire That Doesn’t Go Out and appearing as the first work in Cross-Listed. A kind of mosaic, calendar-like map that charts the days of the year for the tragedies that occurred on them, Schuster’s piece approaches its commentary on the human condition with an ordered, sequential piece. Which engaging with similar unsettling issues to Bloland, Schuster’s work seems to orient and pacify. As counter points, these works tell a more complete story about the range of emotions we experience and the approaches we favor to evoking them artistically.

The Art department’s Claudio Orso’s woodblock prints “The Academons” and “Girotondo Collossio” also address life’s unpredictability and disturbances. “The Academons” is a composition that compulsively, as though from horror vacui, fills the spaces of the picture plane with layers of terrified, sometimes demonic figures and objects. “Girotondo Collossio,” meanwhile, shows a group of men wearing hourglasses for hats, being absorbed into the earth, their faces caught between expressions of terror and mirth. Studio Art Professor Don Harvey’s visually stunning “Two Towers” alludes to September 11, and the composition showing a construction site that appears haunting and unstable.

Chemistry Professor Jesse Rowsell’s “Upstream,” a series of 48 photographs hung in a rectangular grid on the wall opposite the entrance, show “the byproducts of a research project in the field of nanotechnology,” according to the catalogue. Documenting the effects of these experiments on a quartz receptacle, the piece becomes much more than a scientific document.

I was struck by the shows disquieting and even disturbing resonance. It is perhaps telling that although each was created separately and sometimes without the intention to be put on display, the focus of these works came together so easily. Whether through the appropriation and alteration of everyday objects like basketball jerseys, video games and music stands, or through the abstraction of forms, like chemical receptacles, or through the documentation of the foreign, or imagination of fantastical spaces and their inhabitants, the works reimagine and reinterpret our physical world with beautifully fluid results. The curators deserve praise for constructing this cohesive narrative. Stein said, “We really couldn’t start laying out where everything would go until we had the majority of the works in the space. But when we did, we were amazed by the kinds of visual and contextual connections that emerged.”