Words Without Music, Music Without Words: Title TK and Bill Orcutt Perform at the Cat 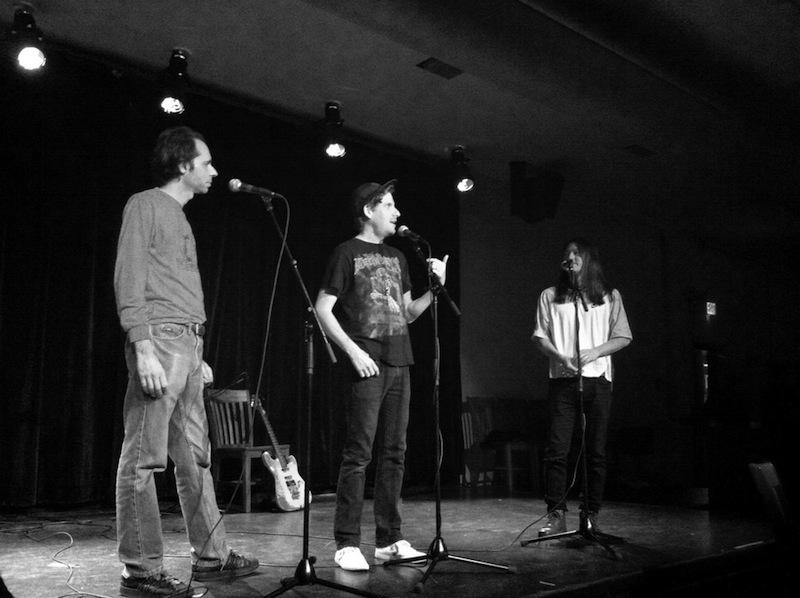 Three guys looking vaguely like 30-year-old “Oberlin types” hopped onstage at the Cat in the Cream on Saturday, April 21, and approached their guitars. Then they evidently thought better of it and went to the microphones without guitars in hand. So began the unorthodox performance of the “band” Title TK, featuring TIMARA department alumnus Cory Arcangel, OC ’00, guitarist and composer Alan Licht and curator Howie Chen.

When the members of Title TK took to the mikes, they began talking to each other and seemed to be warming up the crowd with some banter before the performance really began. They chatted about D’Angelo (his abs and the fact that he is not Maxwell), and then the conversation rambled from musician to musician, topics ranging from Alanis Morissette to Steve Reich, and Lil B to the Smashing Pumpkins. After about five minutes, the audience began to realize that Title TK was not about to pick up their instruments.

After the realization that this was a performance unlike a band’s typical show, the audience tittered uncomfortably at the pointed one-liners, looking around to try and take hints from those who seemed to be more in on the joke. But a few minutes of hesitant chuckling and confusion later, people began to laugh with more gusto, partially at the wit of Arcangel, Chen and Licht but also at the absurdity of the situation. Some of what the “band” said was funny (“Twitter is like broken IM, sending your messages to everyone you know”), but their ad-libbed banter was far removed from stand up comedy in the traditional sense. The funniest part of the performance was the craziness of listening in on three friends’ mostly inane conversation about popular music.

Title TK thoroughly warmed up the audience for the equally unconventional headliner, Bill Orcutt. Once the Guitar player for the now disbanded Harry Pussy, Orcutt currently performs as a solo artist, singing and strumming his own unique brand of the blues. With the lights turned down low at the Cat, Orcutt amazed with his stirring performance, exposing raw parts of himself unabashedly through his emotionally charged music.

Orcutt’s set began with a song that was both twangy and soulful, its rhythmic patterns swelling and shrinking organically, shifting like a huge flock of birds floating on air currents. His fingers tumbled down the strings, playing melodies and rhythms that were chaotic yet cohesive in their scattered and various approaches to a singular musical idea. Orcutt’s pain was palpable.

Part of the strength of the performance was Orcutt’s stage presence. He was unpretentious; he started playing without warning after asking for the lights to be turned down so that he was only just visible onstage. Completely without calculation, Orcutt’s demeanor was utterly honest and open while he played. His body moved uninhibitedly: stomping, nodding and rocking back and forth. He seemed to enter a sort of trance created by the act of producing raw, uncensored expression.

Orcutt’s gutteral singing, a wordless blend of moaning and grunting, added to his set’s emotional tension. What Orcutt seemed to be expressing were wordless, primal feelings best conveyed only by unstructured sound. Putting this much honesty into his performance obviously exhausted Orcutt, who ended each song panting and proclaiming, “Alright, that’s a song.”

To fully appreciate Orcutt’s music, the listener had to completely surrender to the performance, letting go of distractions and focusing entirely and intently on the changing musical lines, the heart-pounding rhythms and the emotional journey that each song took. It was worth the effort. When Orcutt concluded with a surprised “Thank you” to the dozens of people still sitting rapt in the Cat, it was obvious that he was pleased to have had their attention. He had bravely exposed himself through song, and the listeners had felt his sincerity. Orcutt’s set was one of the rare artistic performances that quickly and strongly connects artist and audience, bringing them to the same emotional place, exploring the same human experience.