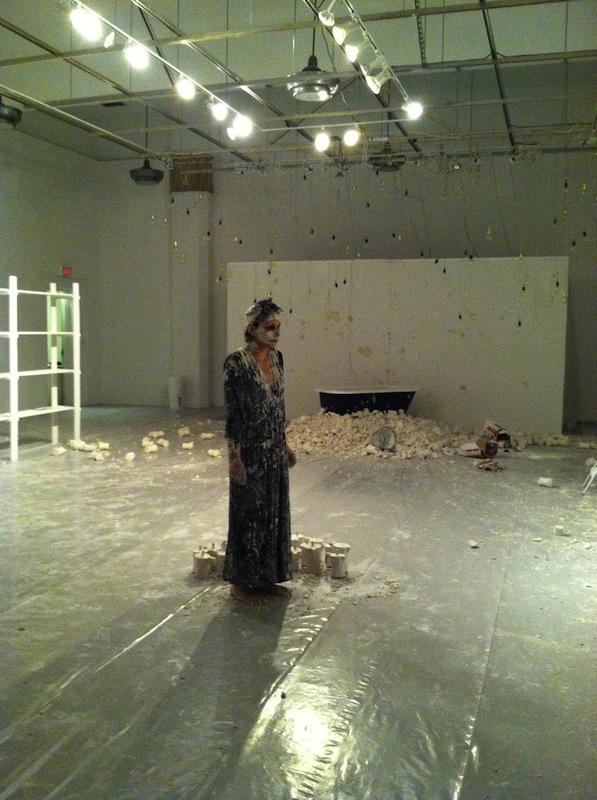 Every now and then, Oberlin students are treated to overwhelmingly stimulating weekends. By some cosmic misalignment in scheduling, this past Friday and Saturday saw three senior studio shows and one individual Honors art show take place.

College senior Allison Fontaine-Capel’s show, Despierta, was an interactive performance art show that took place in Fisher Gallery. Working with Royal Thread Collective — an Oberlin-based, student-run production company — and in collaboration with College senior David Ohana, RTC’s artistic director, Fontaine-Capel created a clinical, jarring space consisting of two rows of shelves dividing the room into three spaces, in the center of which stood a bathtub. On the left side, countless percolators, or cafeterias, cast from plaster, were lined up on the shelves. Being of Cuban descent, Fontaine-Capel mentioned in a later interview that coffee is made in these percolators “over and over and over again throughout the day.” These objects represented mass production and her own culture, and as they were dangerous, hot and volatile, they were under the dominion of “adults.” In contrast, the shelves of the right side of the room contained broken chunks and pieces of plaster.

In the tradition of the famous performance artist Marina Abramovic, Fontaine-Capel wore a black gown in her two-hour performance, where she carried the broken pieces of plaster from the shelves to the side of the bathtub. After emptying the shelves, she poured plaster into the water-filled bathtub, and then entered it. This baptism was followed by Fontaine-Capel approaching a student with one of the cafeterias in her hand and muttering the words “break it.”

Students followed suit and broke the plaster cafeteriasby throwing them against the wall behind the bathtub. The performance ended by Fontaine-Capel curling into fetal position near the center of the room and sobbing. The surprised participators then placed the remainingcafeterias next to her in a symbolic act of consolation. As a commentary on the toils of artistic production,Despierta could have gone in a different direction had it only focused on the moving of the broken plaster, making a more direct reference to the myth of Sisyphus. Regardless, as the first performance art piece since Calder Singer’s senior show in the spring of 2011, it was a welcomed event.

Saturday evening boasted three back-to-back shows, beginning with double-degree senior Maira Clancy’s senior studio show and junior TIMARA recital, Cognizant Creatures. The show took place as a three-part film showing, all films connecting under the theme of isolation. In her artist statement Clancy describes a type of “hyper awareness” that she feels in relation to her surroundings, “an awareness that often times leads to feeling of deep insecurity and separation.”

The first film, titled “Seize” was a stop-motion animation and sound composition about “anxiety and its effect on the human body.” Black-and-white images of a type of sonogram flashed on the screen in accompaniment with loud sounds of mechanical screeching and heavy breathing. Speakers were placed in various parts of Fairchild Chapel to engross the viewer in the experience, “instead of the sounding shooting at you the way it does in a normal cinema,” commented Clancy. However, for the opening piece, the composition of sound proved too harsh on the audiences’ ears: Many covered their own ears or inserted ear plugs.

The second work, “Praha,” was a “sonic quilt of collected sounds coupled with video” taken in Prague, the Czech Republic. The audience was taken though Clancy’s journey through the subway and then finally up onto the street where she paused to admire a sculpture of Jesus on the crucifix. Here, the sound set up worked brilliantly as it mimicked the sound projection one would hear in actual life while walking in public.

And finally, closing the show was “The Lovely Adventures of A Lone, Lost Alien,” a clay-mation that was undoubtedly time-consuming to make, given that we watched this alien travel though many scenes and worlds beyond our own.

Next was College senior Maliya Travers-Crumbis individual Honors show. The exhibition in Hales studio consisted of dolls, hand-stitched remakes of family photographs and a video installation. Taking her family as the focal point, Travers-Crumb created an enjoyable narrative that was personal yet endearing to the point of becoming accessible. The video installation in which she, at the age of six, and her sister, at the age of nine, are interviewed in front of a life-sized Cyclops (from X-Men) cut-out, garnered a lot of attention. Her placement of the dolls on shelves that she had created for the exhibit worked well, especially considering their large, life-size forms. The cheeky facial expressions they had and that Travers-Crumb herself sported in the video were reminiscent of the princess from Velázquez’s Las Meninas or Betty Boop.

The curation of the work failed to highlight the intricate stitching that she had done, which she described as family photographs, because the space made the video and the giant dolls eclipse the other pieces. However, the personal dimension of the work and the repetition of the mischievous little girl motif certainly resonated with the audience.

College seniors Hannah Klein and Rebecca DeWitt’s senior studio show for/giving, took place in downtown Oberlin at the FAVA Gallery. The duo described their reason for collaborating on the exhibition as stemming from their joint work at the Lorain County Rape Crisis Center. Eggs, abstract sculptures with repeated wrapping patterns as well as drawings of wrapped objects all echoed the theme of dealing with womanhood and the physical body. A piece that particularly stood out was a series of windows with foggy dark figures barely visible on the glass. Klein navigated attributing the credit of works in a poetic manner, expressing that “both our hands touched the works here” and “my hand touched that piece more.” Poetry additionally played a role in her artist statement, ending with the phrase “My skin has never felt so tight.”

DeWitt explained that the decision to have the exhibition at FAVA Gallery came from a desire to branch out from Fisher Gallery and the associations that come along with it, whether it is with the College or with Senior Studio. She stressed the importance of the FAVA space as being connected to the community, which was important to them, considering that the history of sexualized violence in Oberlin was a focal point in their show.

The exhibition’s implementation of abstract works and symbolism through the use of shapes such as the egg were extremely powerful, though the gallery’s small space inhibited a complete observation of some of the works. As pieces were quite elaborate, a wider space may have done the exhibition more justice, however the choice of space may have also been a deliberate way of highlighting the themes the artists dealt with.