The Oberlin Review • May 4, 2012 • https://oberlinreview.org/2993/arts/one-fracture-goers-take-on-solarityrtcs-most-recent-event/ 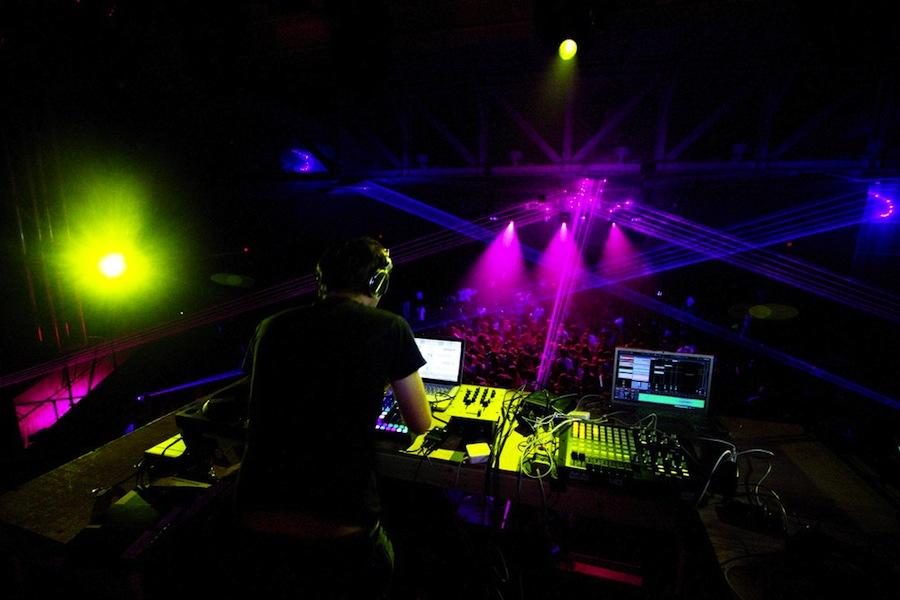 Perhaps people did not know what to expect from Solarity and RTC’s collaborative effort, Fracture. There was talk of a post-apocalyptic theme and performers ranging from And What!?, the all-female hip-hop dance collective, to Knomadik, a jazz-electro fusion septet, but no one was expecting the plethora of student talent showcased this past Saturday night — the dance event, held in Heisman Field House, was a sight to behold. The now campus-famous, student-run production organization RTC constructed a colossal stage that appeared as an industrial-looking structure, featuring raised platforms with several levels above the audience, with the DJ booth at the top.

The night began with a performance by double-degree junior Charlie Abbot, who played a warmup set until 9:45 p.m., followed by Knomadik. College sophomore Mike Braugher took the stage next, and his electro-hip-hop set segued into a garage-electronica set by College sophomore Will DiMaggio a.k.a. DJ Jaw Jam. College senior Scotty Roberts, a.k.a. DJ Ansible, played an electronica set after, which got more people dancing. College senior Peter Morrow, mixing as DJ IKKABOD, riled up the crowd with a surprising collaboration with two members of Knomadik, double-degree senior Aaron Janik and Conservatory sophomore DeSean Jones. The duo appeared on backlit platforms and accompanied the popular dance song “We No Speak Americano” with a trumpet and saxophone. College junior Dan Cook’s (DJ D.Co) finale set, which was house and progressive house heavy, also included a collaboration with the two musicians. As he put on the house music classic, Laurent Garnier’s “The Man With a Red Face,” around 2 a.m., Janik and Jones took the stage and blasted their horns along to the song for a final bang.

One of the highlights of the event was the performance of the And What!? dancers. Beginning with Knomadik, the performers danced throughout the night, among the crowd and on stage, creating an immersive experience. Their theme-appropriate make-up was done by College junior Minjee Kasckow, and their costumes were designed by RTC Artistic Director and College senior David Ohana and Assistant Artistic Director and College sophomore Hillary Rieger. Toward the end of the event, the two main choreographers, College seniors Anahita Khosravi and Jessica Monnerat, began to fuse hip-hop movements with go-go dancing. On account of the emptiness of the platforms around them, this was not the strongest aspect of their performance, but And What!?’s tireless contribution to the atmosphere was impossible to ignore.

The professional laser light installations were key in transforming the space in the Heisman Field House. Their positioning, however, left the DJs mostly faceless to the crowd due to the blinding neon green fan of light that shone from underneath the DJ booth. Furthermore, the student lighting managers were bizarrely placed on this elaborate stage, towering on a platform near the side. The glowing, non-party-friendly light on their faces created a confusing situation, its warm hue serving as a distraction from the blacklight-lit dancers and various musical performers.

Electronic music sets performed on campus have, to date, been hit or miss. Despite the fact that Solarity has established itself as an event that highlights electronic dance music, DiMaggio’s garage-electronica set made few people dance, while the bulk of the now-steady current of newcomers socialized on the dance-floor. Roberts’s electronica set got more people dancing; however, with the exception of the core mass of people, most attendees still seemed reluctant to join in actively. Morrow also got people dancing, but it wasn’t until the intelligently crafted and passionate live performance, which combined jazz and electronic music, that Fracture took off and the crowd went wild.

The bulk of all four DJ’ed sets flowed well and showed careful and deliberate planning, although the acoustics of the field house made it difficult to hear at times. Cook echoed the dissatisfaction with Concert Sound, while one student simply said “Good lighting, terrible music.” It seemed that the overall response to the event was mixed; although past events had been easier to dance to and get caught up in, many of the first-timer Solarity attendees could be heard proclaiming that Fracture was the best night of their lives. Without a doubt, the lighting and level of production were impressive.

Fracture was a grand event. One of the very few Oberlin College events to be completely student-organized, its preparation, from conception to construction to performance, was a collaboration of over 70 people from various parts of the campus community. Cook, who is also Solarity’s co-founder, stressed the importance of the preparation process in significantly unifying the campus body. The sheer size of the event did ultimately raise certain questions, mainly those pertaining to the cost of throwing what was, for all intents and purposes, a party.

The event cost $40,000. Nine thousand of this amount came from the Student Finance Committee, and Solarity co-founder and College junior Eli Clark-Davis explained that this amount mostly went back to the campus in the form of facilities and staff payments, such as paying for Safety and Security officers who worked overtime at the event. Ten thousand dollars was raised from ticket sales, as the event was attended by 1,100 people. The rest of the money was raised through various independent sponsors, and Solarity is still soliciting donations. On the plus side, future events may cost less, both in terms of tickets and in terms of budget, as the modular stage, which was described as “expensive,” is intended to be used in the future in various alternative setups.

Another question raised was that of talent choice. Cook, Ohana and Clark-Davis all expressed that their selection of particular performers and DJs on campus came from a conscious desire to work within the theme they had in mind. From a visual standpoint, the post-apocalyptic aspect was only expressed in the stage design and dancer make-up, and some choreography reminiscent of Michael Jackson’s “Thriller.” Looking at past events, the theme’s implementation was not as strong as Neon Garden, and neither was the energy, perhaps as a by-product of having the event in a large and somewhat discomforting space. As far as judging the collaboration of Solarity and RTC, the event as a whole may have been a product of both student organizations, but RTC’s production clearly stood out. Future events could benefit from a more campus-inclusive approach to the talent search, as well as a stronger effort made toward establishing a convincing theme.