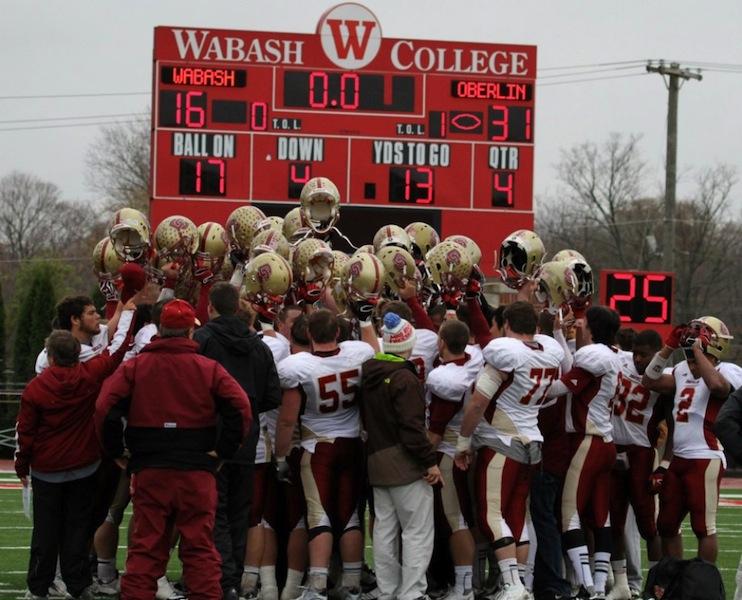 The Yeomen celebrate their historic victory over Number 10 Wabash University this past weekend. Oberlin defeated the Little Giants 31-16 in a classic David and Goliath upset.

This past Friday, the Oberlin football team took the long bus ride to Crawfordsville, IN, to play Wabash University. The Little Giants were ranked No. 10 in the country in Division III football.

Oberlin was the clear underdog, and every Wabash coach, player and fan expected the game to be a cakewalk. Wabash put points on the board first, but the Yeomen were not concerned.

“I didn’t worry at all when Wabash scored quickly. I knew it was a long game and [Head] Coach [Jeff] Ramsey would make the appropriate changes to shut down their offense,” said senior quarterback Josh Mandel.

With under eight minutes left in the first half, the Yeomen responded when Mandel found fellow senior Dan Weintraub at the front pylon from 12 yards out. The half ended with the Yeomen trailing by only one point, 7–6.

Early in the second half the Little Giants widened their lead with a field goal, but the Yeomen came right back when Mandel threw a quick pass to senior Robin Witjes, who ran 66 yards to give Oberlin a 10–12 lead.

The excitement and momentum from this touchdown led Associate Head Coach and Offensive Coordinator Alan Estep to call a trick play, as Witjes got the ball from Mandel and threw to fellow senior receiver David Kalgren, who ran the ball in from 50 yards to put Oberlin up 10–19.

The Yeomen felt confident at this point in the game.

“I knew we were going to win the game. We were firing on all cylinders, and nothing could stop us,” Witjes said.

Mandel agreed, “It was perfect execution by Robin and David.”

The Yeomen took control of the game when the senior duo of Mandel and Weintraub gave Oberlin another touchdown with under 14 minutes left in the fourth quarter.

“It feels amazing to have gotten in the end zone twice against Wabash,” said Weintraub. “Our line did a great job in pass protection, and Josh threw two perfect passes.”

The Little Giants scored a touchdown in the fourth quarter, but this hardly phased the Yeomen as they went on to score another touchdown 37 seconds later off a pass from Mandel to Witjes.

Wabash put up a fight throughout the game, but the Oberlin defense matched the dominance of its offense. Seniors David Kalgren and Shawn Chrapczynski, as well as junior Zach Kisley, each recorded interceptions. Senior Clay Eaton had two sacks and continues to lead the nation with 17 for the season, while classmate Dane Stritt had 14 tackles and one sack. It was truly a game for the seniors, who never let up and led the team to an astonishing 16–31 win, dropping Wabash down to 25th in the nation.

Due to Hurricane Sandy, the Yeomen’s preparation for this game was a little different.

“We had to practice indoors because of the weather, and we even field-tripped to Amherst a couple of times to practice in a full field indoor facility,” said Weintraub. But even with this abnormal practice schedule, the Yeomen were able to pull through.

This win is a historic one for the football team as well as the Athletics department.

“I could not be happier for Coach Ramsey, his staff and student-athletes,” said Interim Athletic Director Natalie Winklefoos. “We are doing things that have never been done on the playing fields at Oberlin.”

Seniors Mandel, Witjes and Weintraub all expect the momentum from Wabash to continue to Saturday, when the Yeomen will honor their 16 seniors in their final game against the 12th-ranked Wittenberg Tigers.

“Defeating Wabash shows us that we can play with anyone,” said Mandel. “This is what we play for — to upset two Top 25 teams, back-to-back, to finish out the year on Senior Day.”

Kickoff is set for 1 p.m. at Savage Stadium this Saturday.