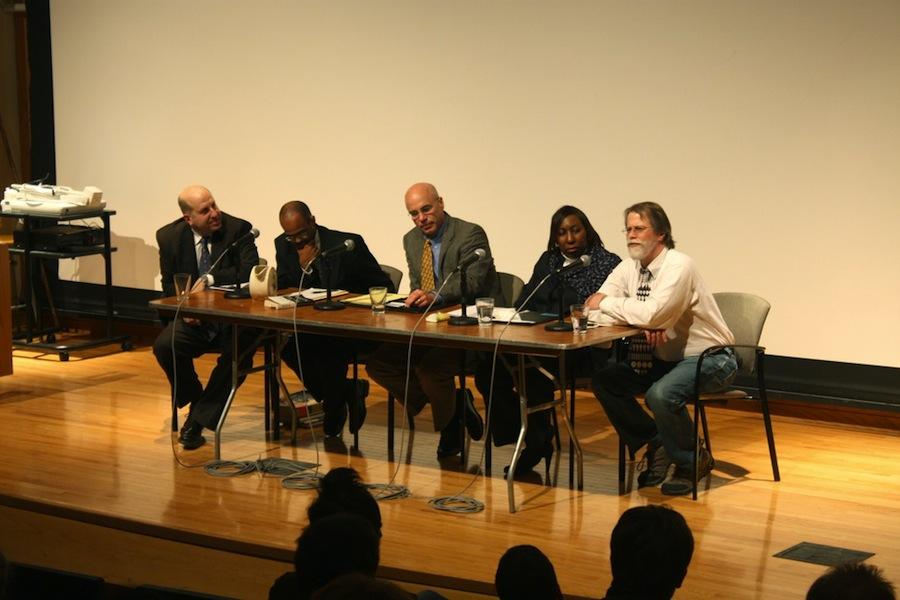 Over 200 students discussed America’s educational system with President Marvin Krislov and a panel of top Ohio and Oberlin educators after a film screening of Waiting for “Superman” Wednesday night.

The screening, which kicked off the Oberlin Young Educators’ Pedagogy Symposium, showcased Waiting for “Superman,” a documentary by An Inconvenient Truth director Davis Guggenheim. After welcoming a crowd of more than 200 at West Lecture Hall, OYE, who organized the event, emphasized that they chose to show the controversial film because they wished to stimulate discourse, not necessarily because they condoned its message.

Superman is an emotionally charged criticism of American public education. Scenes of children such as Anthony, a fifth-grade student from Washington, D.C., losing in lotteries to attend much-sought-after charter and boarding schools are mixed with frequent animated sequences of American schools’ poor performance on their own tests. Less than 12 percent of Washington, D.C.’s eighth-grade students tested as proficient at an eighth grade reading level, according to the film.

Guggenheim blames this on systemic problems like overly powerful teachers’ unions, rigid establishments of teacher tenure and a flawed process of allocating funds. Though he states little explicitly, he advocates the model of certain charter schools, the end of teacher tenure and simply replacing bad teachers with “great teachers” as the solution.

After the screening President Krislov facilitated discussion with the panelists. He was happy with the discussion’s liveliness, he said, and thought the Oberlin Young Educators did a great job of bringing a diverse set of voices to the table.

Doug Sheldon, Oberlin Ohio Education Association president, represented union concerns. He took issue with Superman’s harsh portrayal of teachers’ unions, particularly Guggenheim’s frequently quoting of Randi Weingarten, the outspoken President of the American Federation of Teachers. (Guggenheim also calls an AFT official a “cold-hearted bureaucrat.”) The OEA, Sheldon said, is unlike national unions in many ways – for example, the OEA does not have teacher tenure.

Alexis Rainbow, OC ’82, headmaster of Lorain Arts Academy, generally felt that her school was more similar to the successful charters than the “dropout factories” in Superman.

Geoff Andrews, superintendent of Oberlin City Schools, felt that Guggenheim did not give a balanced review of the teacher tenure issue. The teaching industry, he said, is set up so that teachers have little mobility. They can’t leave the field or their district without significant pay-cuts after about a decade on the job, a fact that Superman completely fails to acknowledge.

Malcolm Cash, OC ’90, senior lecturer of African and African American Studies at Ohio State University, fervidly condemned Superman’s lack of attention to issues of race and class. He related his personal experience of skipping school to go to the library, where he learned far more — as a black man, he said, the lackluster education he had been given was “a crime.” Education depends as much, perhaps more, upon students’ socioeconomic conditions outside the classroom as it does on the quality of teachers and curricula, according to Cash.

Though all of the panelists had problems with Waiting for “Superman,” they did agree that it makes several relevant critiques. They see it as a first step in what should be a continuing discourse in reforming American education. As Cash put it, Superman “ran the first 200 yards of the race.” It’s up to all educators to take the baton and run the rest.

The Oberlin Young Educators’ Pedagogy Symposium will continue Friday with a West Lecture Hall screening of Speaking in Tongues, a film about the bilingual education of several American children, and will run a series of English-as-a-Second-Language and other workshops through Sunday, Feb. 27.