Beejhy Barhany, a native of Ethiopia who was raised in Israel and now lives in New York City, is the founder of Beta Israel of North America (BINA). The cultural foundation helps Ethiopian Jews adjust to life in America and is dedicated to increasing knowledge and understanding of Ethiopian Jews through education workshops, a lecture series, and cultural activities. It’s also a supporter of Oberlin’s upcoming musical, Jerusalem of Gold, about a group of young Ethiopians living in Jerusalem. Barhany sat down with The Review to discuss her reasons for forming BINA, her experiences in Israel, and the Inca trail to Machu Picchu. 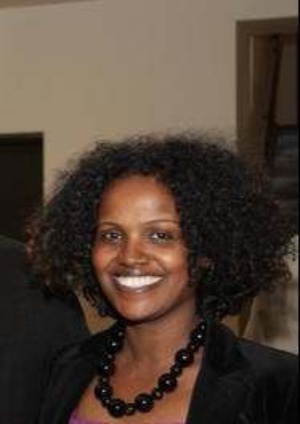 Why did you decide to form BINA?

We formed it in the beginning to network and help one another any way we could — with a job, with housing. We just wanted to create a network for newcomers, which we knew from experience that it isn’t easy to be. So we said, “Why don’t we form a small organization?” And then as time went by, we decided to incorporate and we said, “It’s about time that people know more about the culture and heritage, and we need to spread the beautiful culture we have.”

When did you leave Ethiopia for Israel?

I left Ethiopia when I was four, but I lived three years in Sudan because the Israeli government wouldn’t let Ethiopian Jews immigrate to Israel. They didn’t fully recognize their Jewishness. So we had to be in Sudan, and meanwhile many activists and Ethiopian pioneers who had immigrated to Israel starting in the 1950s began demonstrating in front of government offices. And you know what? They got recognition. They [the Israeli government] said, “It’s about time we let the Ethiopian Jews come, like an other Jews, to Israel. So I immigrated to Israel in 1984, when I was seven.

Your journey to Sudan was on foot, with your family and 300 Beta Israeli villagers. What was that like?

We had to leave everything we had. Cattle, land, house, you name it — we had to leave it to walk to Sudan. Of course there was some preparation — the elders of the community hired guides to show us the roads because at that point it was illegal to leave Ethiopia, so everything had to be secretive. Some walked, some rode on donkeys and horses. We camped during the day so that no one noticed us, and we walked every night. We sometimes went to Jewish villages, and they would help us get some water for the road, some food, and make sure nobody found out where we were moving. I don’t know if there’s a comparison, but you know how in the underground railroad you would have different stops where people would tell you, “Come in, stay here for a little while”? It was a little like that. And it was a two-month walk! Can you imagine? And actually a baby was born on that journey. But through it all, we were driven by the belief that Jews need to live in the Holy Land. We encountered bandits and robbers, but we made it safe. Nobody died. We actually had another addition!

What was it like growing up an Ethiopian Jew in Israel?

I would say at that point the Israeli society was not ready for black people. It was new for them. But we Ethiopian Jews thought we were the only Jews in the world too. So I guess it was a misunderstanding based on ignorance. But overall we had the drive to fully integrate, learn the language, and become Israeli like everybody else.

It’s been almost 30 years since immigration efforts began in earnest with Israel’s Operation Moses in 1984. How have Ethiopian Jews’ integration into Israeli society progressed since then?

There are success stories and there are some issues, mostly with the institutions and government. Ethiopian Jews have to see a special Ethiopian rabbi to get married. There’s something wrong there. Some of them have to undergo conversions, and these are Jews who have been practicing and preserving Judaism for thousands of years and now it’s not good enough. Ethiopian Jews still have a problem in terms of job placement. So I wouldn’t say it’s a success story. It has a lot of mistakes that need to be corrected somewhat. But overall, we’ve made it three decades.

Do people ever ask you how it’s possible to be an Ethiopian Jew? If so, what’s your go-to answer?

Well the thing is, people think that Jewish people are mostly from Central Europe or they’re Ashkenazi — white people. When it comes to black Jews, everyone wants to know how you became a Jew, how it happened and when, and so forth. But I mean that question can be turned on that person as well. Did they know which tribe they came from? Did their ancestors speak Hebrew at all? I don’t think so!

So that’s what you say?

Why speak at Oberlin?

The whole point of BINA is to spread knowledge and understanding. Any place, any institution, that wants to learn and asks us to come talk and educate them about Ethiopian Jews, we will be there. And it’s a nice place; I like it so far. I hear you walked the Inca trail to Machu Picchu. How was that? It was a one-week walk. So I did that. It was nothing for me — I did Ethiopia to Sudan. It was a piece of cake.