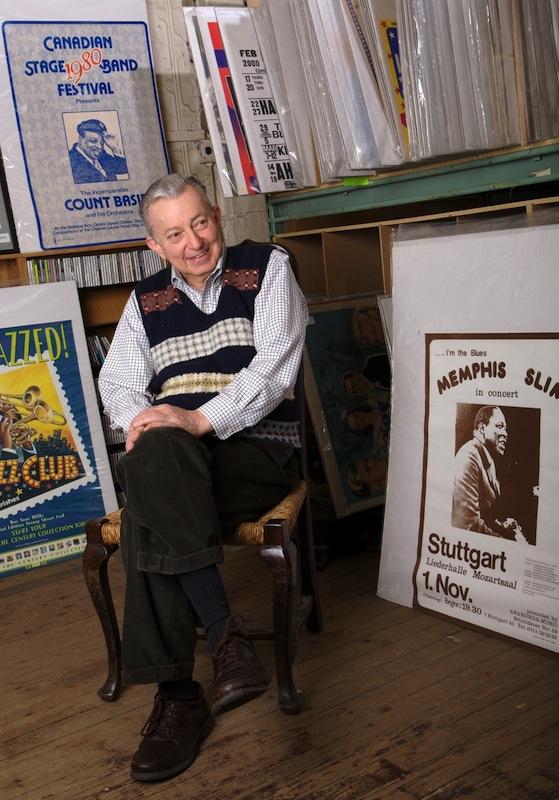 James Neumann, OC ’58, has amassed the largest collection of jazz records in North America, which he says creates “a total picture of how the music grew and flourished, from the earliest New Orleans music all the way to the avant-garde.”

James Neumann, OC ’58, first became obsessed with jazz in 1950, when he was overcome with awe by the first jazz recording he had ever heard: a 78-rpm disc of Johnny Smith playing “Moonlight in Vermont.” Twenty-five years later, Neumann began to frequent weekly flea markets in Chicago to thumb through piles of jazz records one at a time, keeping his eye out for early Clef, Blue Note and Verve records — anything original, collectible. Last year, Neumann oversaw the transportation of his 15-ton record collection — the largest private collection of jazz materials in North America and possibly the world — to its new home in Oberlin, Ohio.

Apart from the fact that it is tucked away in the basement of the Kohl Building, the James and Susan Neumann Jazz Collection is likely a mystery to many Oberlin students because of the sheer incomprehensibility of its size and scope. In total, the collection includes 50,000 vinyl LPs, 12,000 vinyl 45s and 78s, 40,000–50,000 CDs and DVDs, 145 linear feet of periodicals, concert programs, record catalogs and sheet music, plus thousands of photographs, autographs, posters and ephemera. The items in the collection date from the 1920s to the present, encompassing nearly the entire recorded history of jazz.

For Neumann, however, it has never been about the towering statistics or notoriety: “My intent with jazz was just to hear everything,” he reflected. By the time he came to Oberlin as a Biology student in 1954, he had already begun seriously collecting records. His first endeavor as a young collector was to find every recording that pianist Bud Powell ever made; from there, he began to travel backward in jazz history, collecting recordings of pre-bop, swing, Chicago style, New Orleans style and early African-American music. He developed a particular interest in the historiographical development of the music as seen through its earliest recordings: “I began to see an evolution, and I could see how important it was to listen to very early jazz in order to understand how it morphed into what it is today.”

As his personal collection grew, Neumann became active in jazz promotion at Oberlin. Just two years before his matriculation, Dave Brubeck’s quartet recorded Jazz at Oberlin in Finney Chapel, lighting a spark of jazz in the music community that Neumann sought to kindle into a fire. He became a member of the school’s Jazz Club, which consisted of a mere five or six students dedicated to the growth of jazz enthusiasm on campus. At this time, according to Neumann, jazz was an “underground situation” at Oberlin, and the administration of the Conservatory “frowned on jazz as an art form.” Neumann and the Jazz Club worked tirelessly to bring big-name acts to campus, such as Gillespie, Brubeck, Woody Herman, Count Basie, The Modern Jazz Quartet, The Detroit All-Stars, Alvin Jackson and Duke Ellington, among others. Neumann would post advertisements for the shows all over Lorain County, and Finney Chapel would fill with enthusiastic audiences for nearly every show. Due in large part to the efforts of Neumann, jazz at Oberlin began its path toward the thriving jazz community that exists today.

After graduating from Oberlin in 1958, Neumann began working for New Metal Crafts, a high-end decorative lighting company owned by his father. He casually referred to this occupation as his “day gig,” serving as the means that allowed him to follow his true passion for collecting recordings. He eventually took over the company, and his business travels around the world opened up a whole new potential for the breadth of his record collecting: “I was very fortunate to have this opportunity of combining my livelihood with my hobby. It enabled me to get to places where nobody had been… I was living a dream.”

As Neumann began mining London, Paris, Frankfurt and other European cities for recordings, he became fascinated with the development of jazz on the other side of the world from its birthplace. He made frequent trips to European record stores and collectors, often having to carry 30-pound crates of records onto airplanes. As a result, his collection contains an unprecedented accumulation of European jazz recordings, not only providing insight into the European expatriatism of American jazz musicians, but also thoroughly contextualizing the development of the music within European culture.

As his collection of recordings, periodicals, concert programs and memorabilia grew, the necessity for a permanent home for the collection became increasingly apparent to Neumann. In 2008, after years of searching, he reached an agreement with Oberlin for the housing and preservation of his massive congregation of jazz items, and in 2011, he accompanied the transportation of over half his materials to the special collections division of the Conservatory in the newly constructed Kohl Building.

Despite the fact that the organization, preservation, cataloging and digitizing of the collection is an almost unimaginable undertaking, Special Collections Librarian and Curator of the Neumann Collection Jeremy Smith has already made tremendous headway on the project. In the one year that the collection has resided in Oberlin, Smith and several student employees have sorted and created inventories for all the Neumann periodicals, concert programs, record catalogs, sheet music and about 6,500 of the vinyl LPs. Smith estimates that the cataloging phase will be completed for all the vinyl recordings within about two years. Last month, Smith began work on digitizing the audio from the LPs and uploading it to stream on the Oberlin library website. This will be by far the longest endeavor of the collection’s curation: Smith estimated, “To digitize all 40,000 LPs that we currently have would take 75,000–80,000 hours. One person working full time, doing nothing but digitizing all day, could complete that task in about 40 years.”

Last week, Neumann visited the Oberlin campus to view the progress that the school has made on housing his collection. Although he is in the process of handing over his life’s work to the care of an institution, he exudes no trace of sadness for the material loss of his collection — he is instead elated that it has found such a good home and is hopeful for the ways it might enrich the Oberlin community and the jazz world at large. In a culture that is still so chronologically near the birth and development of jazz, it is sometimes hard to recognize its historical significance.

Neumann hopes that his collection will help to contextualize and emphasize the importance of jazz in cultural history: “Jazz is so close to us that we don’t necessarily see it in retrospect … I hope that the material will have some scholarly implication for research, help people who are writing biographies, help place musicians at certain times and certain places. I think that it also gives a total picture of how the music grew and flourished, from the earliest New Orleans music all the way to the avant-garde, and how important the black experience is to that development.”

Neumann also hopes that, while the collection helps to display the ways in which jazz reflects American culture, the international aspects of the collection will show how jazz has captured the imaginations of people from completely different cultural backgrounds.

“Jazz is really one of the only true original art forms that America has contributed to the world; it changed the music culture of many different countries. … This music is not just pop music; it has real roots and significance in world history, just as with any classical music.”

Thanks to Neumann, the history of jazz, a music and culture only a century old, can already count on a hallowed place in history.