We All Scream Pt. 2: Cowhaus, New Cone on the Block 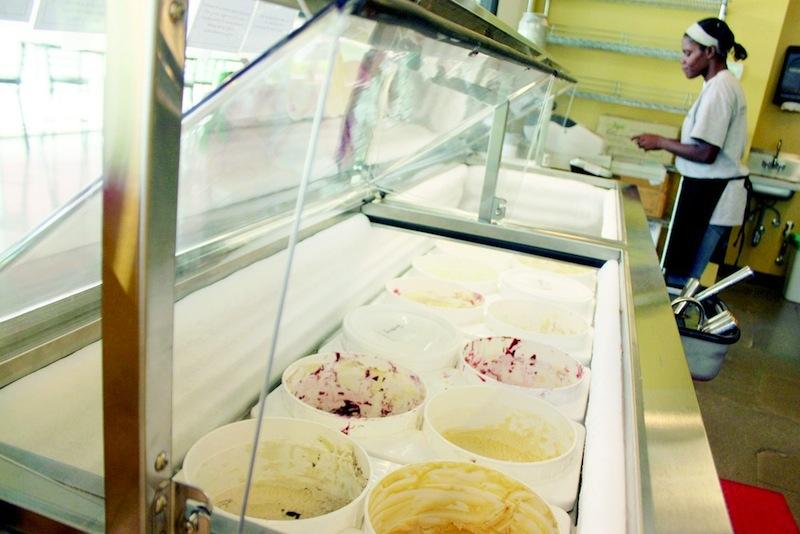 Moo-ve Over Yesterday's: The delicious varieties offered at Cowhaus Creamery prove better than those offered elsewhere.

Last week I sampled both Yesterday’s and Gibson’s ice cream flavors with the hope of choosing a winner. No clear champion emerged, but with the opening of Cowhaus Creamery on Friday, Sept. 16, Oberlin’s newest ice cream shop, perhaps the tie will be broken. Cowhaus, located next to Slow Train Cafe on East College St., is an artisan ice cream parlor that features many local ingredients and bowls and utensils that are 100 percent compostable. The ice cream itself is made just 10 miles away at a creamery in Elyria, Ohio, using the milk of grass-fed cows. The restaurant plans to sell ice cream by the pint very soon, and is also looking to make sundaes, floats and sorbets in the future.

Out of Cowhaus’s 13 available flavors, not one disappointed. All were creative and defied expectations: Even the classic chocolate flavor proved interesting and unexpected. The Henrietta Bramble — featuring blackberries and raspberries mixed into peach ice cream — was my least favorite, but I would still gladly order a scoop of it. The blackberries and raspberries battled the peach ice cream so that no fruit flavor won out; the flavors tasted more like they were alongside one another as opposed to mixed together in harmony. In the end, all of the fruitiness added a sweetness that just barely tipped it over the edge of “too sweet.” The Henrietta Bramble earned a very solid six out of 10.

Wabi Sabi is a flavor worth mentioning simply due to its wackiness, with ginger ice cream complemented by plum and orange sauce mixed in. The ginger does not back down for fear of overpowering; when you smell the it, you can almost feel the ginger in your nose. The amazing thing about Wabi Sabi is that while the ginger is robust, it is not too strong; this flavor was actually one of the lightest that I tasted. The plum and orange mixed so perfectly to add just the right amount of sweetness, earning this delight an eight.

Another flavor that was not a superstar was the blackberry vanilla swirl. The vanilla did what many vanillas mistakenly do: It took a backseat attitude for fear of canceling out the supplemental flavors. In my experience, a weak vanilla always hinders the other flavors, dragging them down with it. A vanilla should never shy away, which is where the blackberry vanilla swirl misses the point. The fresh and local blackberries, however, are so perfect in this ice cream that I still awarded the flavor a 5.5.

The two winners at Cowhaus were clear: chocolate gestalt and Cartoon Milk. The chocolate gestalt was perfectly rich and slightly bitter. The nuanced cocoa flavor competed for top billing with the thick, mousse-like consistency, earning this ice cream an unprecedented 10 out of 10. Simply fantastic.

Not one to be outshone, Cartoon Milk brought its A-game inside my bowl. This flavor was like nothing I had ever tasted before. The ice cream was a sweet, milky flavor — best compared to the bits of icing on Frosted Flakes — topped off with toasted cornflakes. The pair was magnificent and could be most scientifically described as kid’s cereal multiplied by 1,000. My taste buds truly did not know what to do with this phenomenon. Rated a nine out of 10, this flavor is perfect for breakfast or for any time of day.

Cowhaus Creamery certainly did not disappoint. Though a bit pricier than the other ice cream establishments, with prices ranging from $3.00 to $5.75 each, every flavor possessed complex combos and surprises that won’t be found in the average ice cream shop. The flavors that featured fruits were certainly weaker than those that catered to the sweet and salty, but no losers stood out among the various options. A tie forged last week between Yesterday’s and Gibson’s is now broken: Cowhaus is the clear victor. Now that all of the flavors of ice cream in Oberlin have been tested, the real question becomes: Is the Oberlin population large enough to support three ice cream shops?