Football Can’t Cash In Against Scots 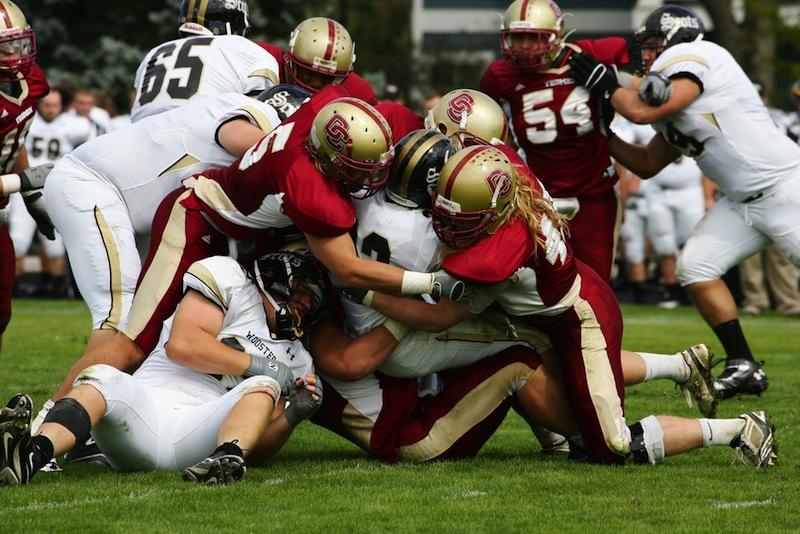 Despite the support from a packed stadium, the Yeomen couldn't overcome the College of Wooster Fighting Scots' offensive attacks. They lost in a heartbreakingly close match, the final score coming in at 3-14.

With the stands packed at Savage Stadium, Oberlin football came up agonizingly short in a heartbreaking loss to the College of Wooster Fighting Scots last Saturday. Failing to convert in the red zone on multiple drives, the Yeomen lost a tough 14–3 game. Plagued by costly turnovers and an injury to junior quarterback Josh Mandel, Oberlin could not find the rhythm necessary to claw its way back into the game.

Both teams started out slow, each going three-and-out on their first two possessions. The Yeomen had great field position, starting their third drive on the Wooster 27 yard line following junior defensive back David Kalgren’s 13-yard punt return. However, they were unable to punch the ball into the endzone, settling for a field goal by junior kicker and backup quarterback Joe Cook.

Wooster battled back in the second quarter, converting two fourth-down plays — including a miraculous 4th and 19 — en route to an eventual touchdown, giving them a 7–3 lead. Both teams failed to convert on their chances throughout the second and third quarters, as drives stalled and each team’s defense managed to make plays.

The hard luck continued for the Yeomen as Mandel went down hard at the end of the third quarter, suffering from a separated joint in his left shoulder. Cook was called in to take his place, but the Yeomen offense simply could not move the chains without their signal-caller, ultimately failing to put another score on the board.

Wooster’s starting quarterback also suffered a tough injury in the fourth quarter, breaking his leg on an awkward hit by Kalgren. However, the Fighting Scots were able to close out the game by putting one more touchdown on the board, winning 14–3.

“I think the key to that game was who made less mistakes at crucial times. Looking at the stat sheet, we should have won that game, but a lack of focus and execution in critical situations is what caused us to give the game away to Wooster,” said Mandel.

Offensively, Mandel paced the Yeomen with 174 yards through the air, 108 of which went to senior wide receiver Cory Kidd. Oberlin netted only 61 yards on the ground, as sophomore tailback Moses Richardson and senior Drew Mixter were never able to find a rhythm. On the defensive side of the ball, junior linebacker Matt Misorski had 12 solo tackles. Sophomore defensive back Zach Kisley added five total tackles to go along with a forced fumble and an interception.

Oberlin looks to rebound this week against Hiram College for the Homecoming game. The Yeomen came out on top in last year’s battle at Hiram, blowing out the Terriers 42–21.