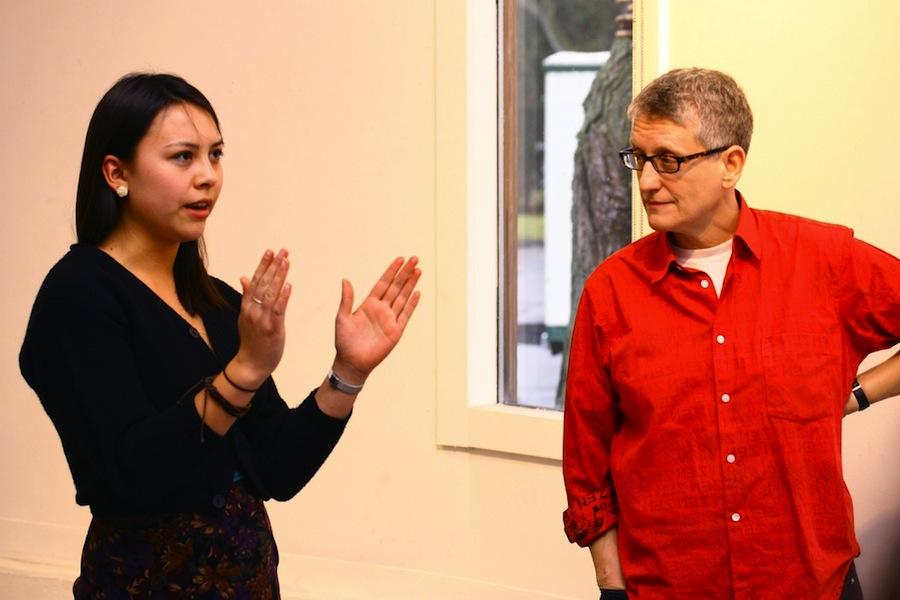 Senior Studio member Skylar Sweetman, left, discusses her art with internationally acclaimed artist Roni Horn. Sweetman was one of four artists selected by the Exhibition Initiative to undergo the honor of a critique of her work by Horn.

“Which Roni Horn do you want to talk to?” visiting artist Roni Horn asked a packed classroom in the Art Building before opening up a question-and-answer session. “There are many of them.”

This bold, yet strikingly honest statement was characteristic of the way the artist addressed eager students and faculty members alike during her visit last Friday. Indeed, Horn’s multiple “Roni Horns” reflect the broad scope of her work, which encompasses a range of media including photography, sculpture, books and drawing.

Horn’s visit — sponsored by the Exhibition Initiative, a group that aims to promote student art at Oberlin — included critiques of four students’ completed artworks in the afternoon, followed by a question-and-answer session later in the evening.

The artist’s keen eye, provocative observations and dry sense of humor were all on display early on during the critiques. These analyses started with a quiet contemplation of the student’s work, during which it was almost as interesting to observe Horn, whose focused gaze might lead one to believe that she had achieved a comprehensive understanding of the piece in just a few short moments. Horn’s only difficulty seemed to be engaging the timid assembly of students in speaking about the different works; however, once the group hit its stride, some exciting conversations emerged from the dissection of each piece.

The critique of College senior Skylar Sweetman’s work, for example, led to a stimulating discussion about our everyday interactions with the spaces around us. Sweetman’s photo, titled “Neon,” was shot inside an empty Chinese buffet not far from Oberlin. The interior’s hot pink and blue lighting, generic architecture and generally stomach-turning character led Horn to expound on our tendency to “acclimatizing to weirder and weirder things.” “We acclimatize to toxicity,” she said, citing public spaces such as strip malls and airport terminals as prime examples of “degraded spaces” that make her ill at ease.

However, Horn’s commentary was not limited to more general discussions like these: More often than not, her critiques were blunt and focused on the central issue or issues at hand. For instance, Horn praised College senior Claire Stepherson’s submission for its diverse use of symbolism, but admitted that the finished piece came off more as a “collection of parts” than a resolved piece with a clearly defined narrative.

The critiques were followed by the Q&A session in the Art Building’s classroom I, where Horn charmed the audience with her candid answers to students’ and faculty members’ questions. During the Q&A, Horn explained that in spite of the range in media evident in her work, her oeuvre — and, perhaps, her different personae — is unified by a few central themes. Identity and personal experience play a major role in Horn’s art. Additionally, she told the audience, strong connection to the exhibition space and to place in general plays a crucial role in her work.

This aspect of the artist’s process elicited questions regarding her working relationship with curators and the extent to which she is involved in the organization of her own exhibitions. She responded to this inquiry by stating that she likes to incorporate the audience and the architecture in her installations, but that “the curator doesn’t have much space” in assembling her work because “it’s sort of pre-determined.”

The artist responded to a similar question regarding the importance of the exhibition space and the all-too-common trope of the “white cube” format of contemporary galleries and museums by saying, “If the architecture isn’t going to work with my work, I just won’t do the show.”

Another interesting thematic thread emerged when a student asked whether or not Horn’s installation piece, “Library of Water,” was a direct response to global climate change. This beautiful example of Horn’s work includes 24 glass columns, which contain glacial water collected from all over Iceland. The artist claims that originally she “did not set out to talk about global warming,” but that the issue became more important as progress on the installation went on.