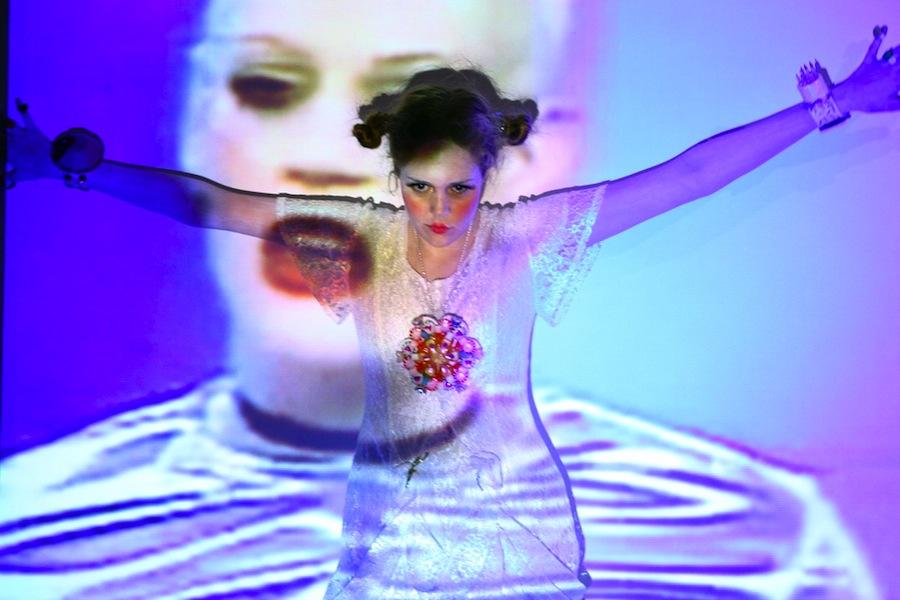 The artist staged a 5 person zombie doll extravaganza to a flashing powerful video and the sound of smooth techno.

Supernatural, the duo Senior Studio Show by Calder Singer and Mary Kate Kelly, unfolded like a delicate boxing match. Upon first impression, their work read like a battle between the ethereal versus physical, glamorous versus earthen, timeless versus fleeting. Could we even say hipster versus hippie? Although they were at odds in terms of naturalism and plasticity, the show moved beyond these dichotomies, working together and rocking out individually.

In Fisher, Singer orchestrated a performance that projected a fabulously edited work of video art onto five models on a continuous rotation throughout the show. The video was, in moments, part club kid music video, part disaster montage, cutting between flashing monochromes, tranquil waterfall shots, drag queens and digitized green dots. Each of the models seemed to embody some facet of Singer’s personal mythic reality. Swerving and posing in front of the projector, they became a unique detached persona of the artist himself.

The video installation in classroom II next door particularly satisfied those familiar with Singer’s work by verbalizing the emotional and intellectual complexities of Singer’s narrative. Singer’s ongoing project involves the visual, auditory and tactile reimagining of 9/11 as a unique personal aesthetic: He seeks to create a sense of how the events of 9/11 feel and look.

Framed within the context of this ongoing narrative, the video — a loop of Singer talking while having another video projected on him — served as a logical extension of his past work. While the text he recited avoided any direct mention of 9/11, he spoke vaguely about living in the financial district; additionally, although the distorted voice in the video was initially distracting, it established an undeniable alien vibe.

By showing a video displaying projections of himself, Singer managed to fashion himself as creator and overlord of an intense display of visual ecstasy. He is not the subject but the object; he is not the blank canvas but the projection itself. Furthermore, the video installation projected onto an array of kooky characters, imposing Singer’s world onto them and forcing them to act as players within it.

Now, if all of that sounds super annoyingly meta, it’s because it is easy to witness the importance of Singer’s work, but difficult to pin down verbally. He practices the construction of worlds and spaces complete with their own set of characters, movements, rules, histories, vocabularies and sounds. The future success of the project depends on his ability to continue expanding the rich textures of these landscapes without reducing them to predictable stereotypes.

Though much of the initial attention was drawn to Singer’s moving dolls, Mary Kate Kelly could not be outdone. Because Singer’s work took up so little of the space in the main gallery, Kelly had her work cut out for her. Her devastatingly impressive North Eastern Forest — a drawing in thread, string and pins displayed on the largest wall in the room — demanded attention.

The work offered a nearly life-size, cross-sectional view into a forest of diverse trees indigenous to Northeast Ohio. Broad and encompassing, the pulsating installation appeared at first more like the vital signs on a heart monitor. The initial denial of depth gave way to a profoundly well-rendered forest of tree trunks where sycamores and oak trees rose like skyscrapers. Kelly deployed black thread like she was using a pencil, achieving detail and shading by layering black string in varying thicknesses. As an aesthetic object that was fragile and inviting, bold and skillfully designed, North Eastern Forest should continue to command acclaim.

Visually and spatially imposing, North Eastern Forest also helped elaborate on Kelly’s wider attempt to discuss the horizon line. In her statement, Kelly argued that looking off toward a horizon line and having that view disrupted by the detail on the vertical obstructions presents the viewer with multiple scales at the same time. “This visual mode of understanding,” she wrote, “should be used as a literal approach to the environment — we need to learn to see the big and small picture simultaneously.”

Similarly, Kelly’s work demands close inspection and attention to deal. Less about preservation or detached scientific categorization, Kelly’s close ups of trees — inspired by a professor who could identify trees solely by their bark — offer a demonstration of intricate natural beauty.

Though not fully complete as a metaphor, the horizon line functions brilliantly as a consistent visual element. It was the central feature of the series of paintings on the wall adjacent to the large installation. In these works, Kelly unearthed a second gem only to move away from the piece’s stunning simplicity. In Horizon, a piece on a wooden panel with a crack across the center is accentuated by light charcoal (more wood) and painted with white gesso, emphasized the texture of the wood. The piece was immediate and resolved. Though skillful, the later works in the series used canvas and paint to create more symbolic visual representations. By doing so, they lacked the phenomenological physicality of Horizon.

For a showcase of two very different artists,Supernatural felt consistent. The continuity within the work of each individual artist simplified the viewer’s task. In a way, Singer’s make-up, neon sensuality and Kelly’s tree bark ecology both complemented and refreshed each other.