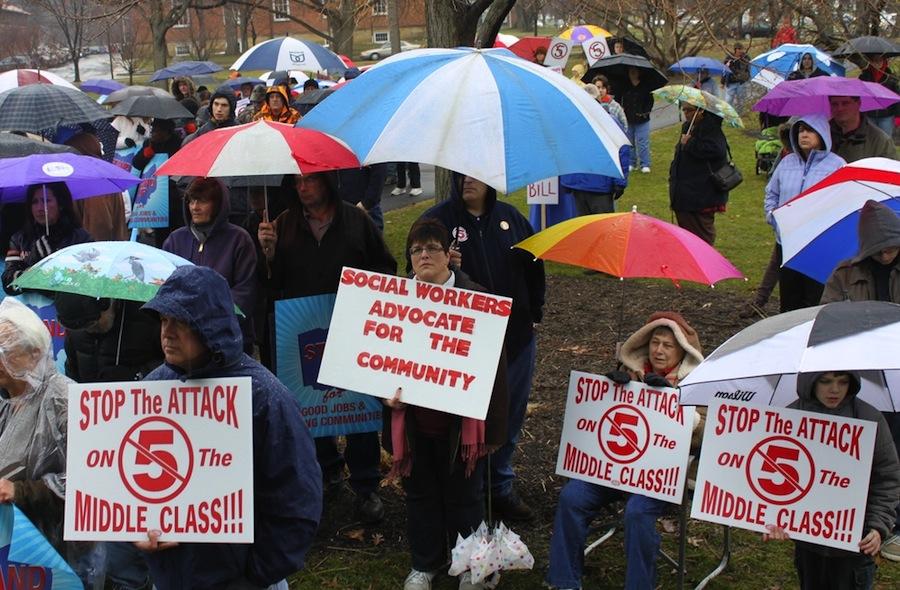 Braving inclement weather, over 100 Oberlin community members convened in Tappan Square to protest against Ohio Senate Bill 5. Professor of Politics and East Asian Studies Marc Blecher expressed hope that such wide support bodes well for a referendum to repeal the bill in the fall.

On Tuesday afternoon at the bandstand in Tappan Square, over 100 members of Oberlin College and the Lorain County community gathered outside in the rain to rally against Senate Bill 5, which would eliminate all of Ohio public employees’ right to collectively bargain for adequate benefits, fair wages and safe working conditions. Governor John Kasich and Republicans in the Ohio House and Senate introduced the bill, which affects public school teachers, police officers, firefighters and librarians. As part of the Stand Up for Ohio rally, thousands of people gathered in 12 other locations across Ohio at the same time.

Beginning at 5 p.m. and moderated by Professor of Politics and East Asian Studies Marc Blecher, the rally featured speakers from the College and the Lorain County community, including statements by Senator Sherrod Brown and Lorain County Representative Marcy Kaptur.

“This is a bigger issue than just unions versus governors — it’s a fight for the middle class and a way of life,” Senator Sherrod Brown said in a statement read by Beth Thames, Brown’s deputy state director. “You can blame bad trade deals, irresponsible fiscal policies for Ohio’s financial crisis, but you can not blame public workers for the mess we’re in.”

Kaptur echoed Brown’s sentiments in a statement read by University of Toledo Professor Emeritus and Kendall Resident Michael Kay: “We watched the spectacle of some of today’s governors try to dictate to citizens who earn $24,000 on average and those who aren’t even eligible for social security but receive $900 a month on average public employment retirement that they should sacrifice more to balance state budgets. They have already sacrificed and they are willing to do their share because they are decent, hardworking, middle-class Americans. They don’t deserve to be made scapegoats for the state budget problems.”

Kay, whom Blecher described as “one of the stalwarts of the local, progressive Democratic community,” had his own remarks as well: “Why are they picking on the public sector workers? Well, the fact is, 6.9 percent of the private sector work force is now organized. However, 36.5 percent of the public sector workers are organized. This is the last bulwark that can prevent those bastards from turning totally into an oligarchy.”

Even though Congress will likely pass the bill, he said, he plans to mount a campaign in 2012 to have constituents sign for a referendum on “this nefarious law.” He urged ralliers to “work [their] butts off to make sure it passes and gets rid of this damn law that they are passing.”

Hill evoked the Freedom Riders, the civil rights activists that were the subject of a recent documentary screened at Oberlin, and warned college students, “Twenty years from now, you will be living with the consequences of your action or inaction today.”

College sophomore and chair of the OC Democrats David Fegley also addressed why college students should care about S.B. 5: “The Ohio that we will one day inherit must be a place where the people who fight fires and fight crimes are treated with the level of respect and dignity that they deserve.” He also said, “We remember the teachers in the past who have stood up for us, and today we are here to stand up for them.”

Fegley announced that Student Senate recently passed a resolution criticizing S.B. 5, and that the OC Democrats had gathered over 1,000 signatures against S.B. 5.

Oberlin College Office and Professional Employees Vice President Jackie Fortino addressed the historical importance of collective bargaining, which has been part of Ohio law for 28 years. “It has reduced the likelihood of labor strikes and improved productivity among public employees. The law passed in 1983 has worked well by establishing balance in negotiations by creating a framework for problem solving that makes strikes rare. We use bargaining for positive change to shape working conditions, communicate about issues and tap into employee knowledge, skills and experience.”

Although Ohio Republicans claim that eliminating collective bargaining will help solve the state budget deficit, Fortino declared that this reasoning is simply “a distraction to bust the unions.”

“The truth is that this bill will not resolve the budget deficit,” Fortino said. “Nine percent of the state’s budget goes to employee salaries and benefits. Firing every state employee in Ohio will only save two billion dollars and leave the state without vital services and a remaining six-billion-dollar deficit.”

Fortino also cited a January poll that showed Ohio voters opposed limits on collective bargaining by public employees 51 to 34 percent. “So who are our lawmakers representing?” she asked. “Not the majority.”

Blecher later said of the event, “Seeing so many people from so many different walks of life turn out in such inclement weather bodes very well for our campaign to repeal S.B. 5 in the fall through a referendum, which will be a victory not just for working people but also for democracy.”