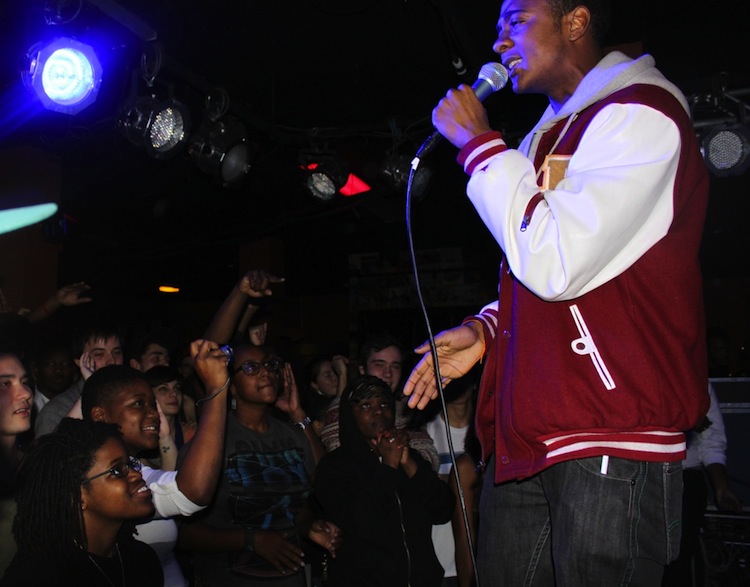 College junior Daveed Audel rocks the mic at The First Episode, the debut performance of the WIlder Hip Hop Collective.

Oberlin’s hip-hop scene exploded onto the forefront of campus activity last Thursday, March 10, with a performance by the Wilder Hip Hop Collective. The group’s debut show at the ’Sco, titled “The First Episode,” kicked off the night with beats that shattered the ground and thumped through the crowd. For the next two and a half hours, the Collective spat out original lyrics and sets by Oberlin students to the delight of a wildly cheering crowd. MCs dropped rhyme after rhyme into a hungry microphone while hip-hop dancers and b-boys and girls rocked to the beat in a full circle cipher.

The spectacular show may very well be part of the beginning of a burgeoning hip-hop movement for Oberlin musicians and lyricists that had long been brewing beneath the College’s mainstream venues. Although last semester’s The Word ’n’ the Beat performance gave the College community a glimpse at the hip-hop talent that Oberlin has to offer, the recent creation of the Wilder Hip Hop Collective ensures that hip-hop artists will be far more visible in the coming semesters.

The Collective’s humble beginnings stemmed from College junior Andrés Feliciano’s vision for a comprehensive and cooperative Oberlin hip-hop community. Feliciano began to formulate the idea for the Collective last semester while searching for a night at the ’Sco to play original Oberlin hip-hop music. “Hip Hop 101 gave me March 10 and I’d been planning it ever since,” Feliciano said. “It really started coming together this semester … I started a Google doc and emailed every hip-hopper I knew.”

In forming the Collective, one of Feliciano’s greatest priorities was to take the potential for a great hip-hop community in Oberlin and turn it into a reality. “There are a lot of really dedicated and talented people with good ideas,” he said. “I really wanted to see them shine and give this campus something to be proud of that they could definitely call their own. And everyone shined.”

The efforts of everyone in the Wilder Hip Hop Collective and its allies turned the dream of “The First Episode” into a reality. The Multicultural Resource Center and Third World Co-op were particularly crucial to the collective’s development, providing the funding and support necessary for the group’s debut show. The result was an all-inclusive lineup of rappers, MCs, dancers and DJs who hail from every corner of the sprawling hip-hop landscape.

According to College first-year Sam Brown, the Wilder Hip Hop Collective is quickly becoming a new source for those interested in participating in hip-hop or interested in finding new music. For Brown, the Collective provides an important space for students to channel their emotions, serving as a venue for self-expression and the exchange of knowledge about hip-hop, an art form that Brown says is synonymous with “expression, change, hope — [and] the ability to be yourself.” With the group’s formation, students will now have the opportunity to look beyond the Conservatory to explore and experience the full spectrum of Oberlin’s musical talent.