Drag Ball: The Show Went On 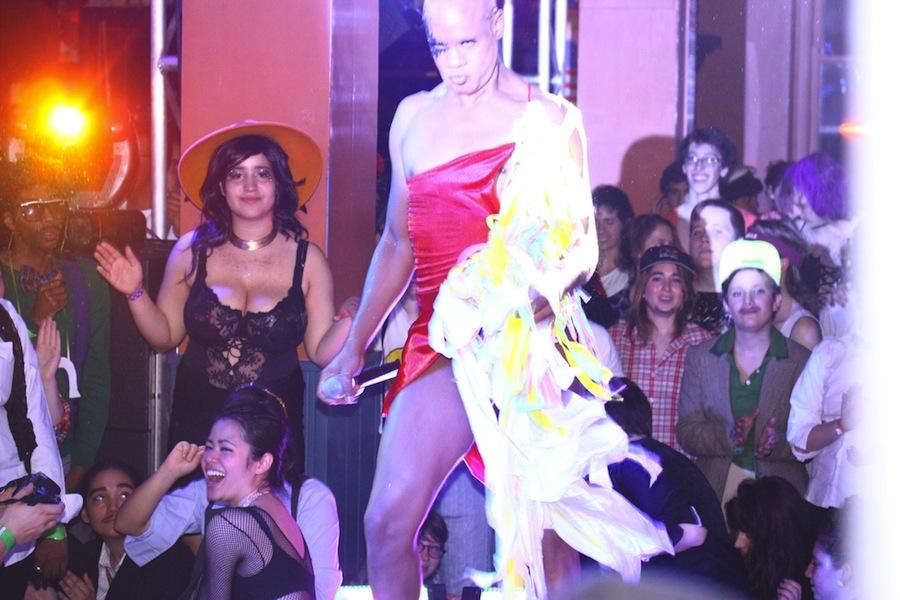 Once the show got started, Drag Ball lived up to the hype.

Early on Friday, April 8, President of the Drag Ball Committee and College senior Hunter O’Neill received an e-mail from City of Oberlin Fire Marshal Dennis Kirin informing him that he had limited Drag Ball attendance to 280 people: 100 in the ’Sco and 180 in DeCafé. “The minute I saw this information, my jaw dropped,” O’Neill wrote in an email to the Review.

After a reevaluated fire code severely curtailed the number of attendees allowed into the Halloween Guided by Voices concert in Hales Gymnasium, O’Neill and Drag Ball Committee treasurer and Review Arts Editor Jimmy Hagan had been working with Kirin to settle on a mutually agreeable amount of tickets to make available for Drag Ball. Because the Drag Ball Committee was installing a runway, Kirin felt the ’Sco’s fire code, normally set at 500, needed to be reevaluated.

“The number he calculated was 490,” wrote O’Neill in his e-mail. “He told us that he wouldn’t write that number on our fire permit, because he believed that only 100 people should be allowed in the ’Sco… He told us that since he wouldn’t write a number, we would have to have Oberlin Facilities write the number, and they would be liable if a fire happened and people were hurt/things were damaged.”

Friday morning, when O’Neill received the permit via email from Kirin, O’Neill saw that Kirin had in fact written in a maximum capacity: 100 people in the ’Sco. With 180 people in DeCafe and only 100 in the ’Sco, Kirin was allowing only 280 attendees in the Wilder basement. The Drag Ball Committee had already given out more than 280 vouchers, and had planned to give out even more that afternoon at TGIF.

O’Neill immediately got in touch with Student Union associate director Chris Baymiller, with whom Hagan and O’Neill had been working with throughout the planning process. Baymiller had been an advocate for Drag Ball in previous years, and also helped book the Guided by Voices concert that ran into fire code trouble last October.

Baymiller then got in touch with Dean of Students Linda Gates. Confused by the situation, Baymiller and Gates concluded that the newly constructed runway was the crux of the fire marshal’s decision. “The only conclusion we could draw [for the reason for the change] was because, structurally, the ’Sco looked different with the runway than without a runway. On a normal night, the capacity is 500,” said Gates.

“I called the city manager, the city manager called Dennis Kirin — all of this is compressed, this is about a five-hour period over which all of this happened — and Dennis communicated back to him,” said Gates. “There were a number of conversations over the course of the evening.” President Marvin Krislov was also involved in the discussion, she later added.

In her call to City Manager Eric Norenberg, Gates explained that even though the runway now occupied floor space within the ’Sco, the tables and chairs would be removed, leaving as much floor space as usual, if not more, in Wilder’s basement.

O’Neill said he had told the fire marshal that the tables and chairs would be removed several times already, but, nonetheless, after talking to Norenberg, the fire marshal agreed to raise the capacity to 500 if the furniture, including the stage, was removed and several other aspects of code were met such as not covering exit signs or fire alarms, not using fog machines, etc. In previous years, the fire marshal had agreed to disable smoke detectors during Drag Ball so that fog machines could be used.

Around 10:30 Friday night, Norenberg phoned Gates and told her that the issue had been resolved; the show would go on.

Earlier, on Friday afternoon, O’Neill and Hagan decided to appeal to the student body for help. Gates, President Krislov, and other administrators received a flood of e-mails from students encouraging the administration to defend Drag Ball. Gates said that she had been working on the issue before the deluge of e-mails began, and, in her opinion, the outcry did little to help the situation, but only heightened the administration’s anxiety. The e-mails continued well after the issue had been resolved; among other appeals, Vice President of Communications Ben Jones reached out to students via Twitter to spread the word that the ball was on.

The emails to the administration came from many students who felt Drag Ball had been targeted by the fire marshal because it was a queer event. Eric Estes, the Associate Dean of Academic Diversity and the director of the Multicultural Resource Center, disagreed.

“I made it clear to Hunter when I spoke to him on Friday that I felt like it was a challenging situation, but that it honestly could have been any other event that was looking to hold itself in a space that would potentially need to have the capacity reevaluated. So I don’t have any sense that it was because it was a queer event,” Estes said.

Estes also felt there was no clear link between the Guided by Voices fire code troubles and those surrounding Drag Ball, but, according to Gates, the two problems do underscore an issue identified by Student Union staff: The fire capacities of many Oberlin venues are not set.

Gates said that since the Guided by Voices concert, Baymiller has been trying to pin the capacities down to a recorded figure that can be kept on hand to avoid future fire code conflicts.

At the time of print, Kirin could not be reached for comment.