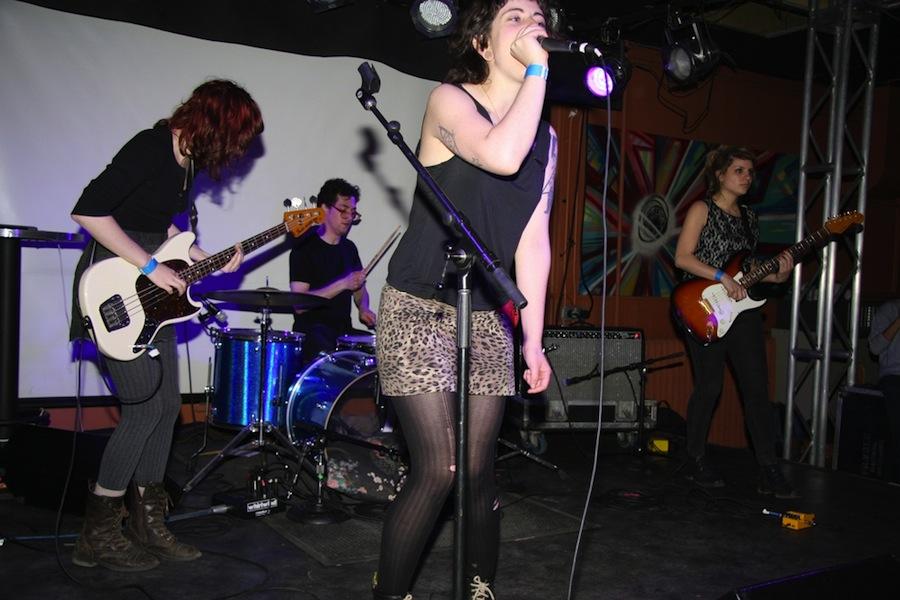 For anyone who thinks that feminism is a fading trend, one look at the ’Sco during Riot Grrrl Night last Thursday, jam-packed with kids of all genders thrashing and singing at the top of their lungs in a raucous ode to female empowerment, would change their mind.

The event, sponsored by The Oberlin Review, WOBC, the Luce Professorship of the Emerging Arts and the Creative Writing department, paid tribute to the Riot Grrrl movement — an underground punk-rock and activism phenomenon with roots in Washington, D.C, Seattle and Portland. With an emphasis on sex positivity, self-reliance, rejection of the gender binary and reproductive freedom, Riot Grrrl is part of a rich history of radical feminism throughout the 20th century, the “Riot Grrrl” movement first emerging around 1991 as the product of reactions to the failings of Second-Wave Feminism.

If you remember hearing that “girls rule, boys drool” mantra on the playground, you’re recalling the ’90s tongue-in-cheek feminism that Kathleen Hanna, lead singer of the notorious all-girl punk band Bikini Kill, and her compatriots celebrated. If you’ve dipped your nose into the whip-smart, estrogen-with-a-razor-edge writing of Bust or Bitch magazines, you have experienced the mass-media trappings of Riot Grrrl that have burgeoned since its early underground days. Hanna and others pioneered the electrifying manifesto of Riot Grrrl through zines and meetings, introducing countless women to a new frontier of fresh, sexy grassroots activism.

Sara Marcus, OC ’99, was one of these women. In her recently published exposé Girls to the Front: The True Story of the Riot Grrrl Revolution, Marcus chronicles a time in the ’90s that has come to define a revolutionary moment in political and musical history. Marcus’s reading was preceded by a performance by WAM! (Women in Art Music Ensemble), an all-female TIMARA ensemble devoted to playing contemporary music by living female composers. The group, consisting of TIMARA/art professor Julia Christensen, double-degree junior Elizabeth Bennett, College freshman Sally Decker, Conservatory junior Melanie Mazanec, double-degree sophomore Susan Russ and double-degree fifth-year Megan Kyle, was joined onstage by Bevin Kelly, OC ’95.

The group then played “Trainwaves,” written by double-degree senior, WAM! Member and Reviewcontent editor Hannah Selin, then improvised two pieces with live electronics based around Kelly’s own compositions. The instrumental combo, enhanced by a haunting digital track in the background, performed in front of a projection of snowy woods that shifted colors as the streams of long, wavering notes waxed and waned from consonant to dissonant. The surreal effect of weaving between ethereal harmony and chaotic musical cacophony cast an entranced hush over the spectators.

Marcus was next in the lineup. Sipping her ’Sco beer and reading an excerpt from Girls to the Front, she brought an anecdote about Kathleen Hanna to life. Marcus loved her audience and it loved her back, throwing its collective shaggy head back in laughter at the falsetto voices and theatrical exclamations punctuating her snarky narrative. One passage she read mentioned the type of girl “whose favorite book, before discovering feminism, was The Fountainhead,” to which the audience roared in appreciation.

“I always like to see how many people laugh when I read that line,” Marcus said coyly. “I thought at Oberlin, that number would be pretty high.” The girl knows her alma mater, and she immediately endeared herself to her audience.

Marcus’s playful, giddy attitude boosted the energy in the room in preparation for a delightfully riotous set by Oberlin’s own Bikini Kill Cover Band, composed of College senior and Review Editor-in-Chief Beatrice Rothbaum, College seniors David Greenberg and Rose Hermalin and College first-year Lizzie Conner. Within the first four measures of the band’s first song, “Double Dare Ya,” the audience broke into a rampant moshpit, ironically upstaging the band’s fierce energy onstage. In order to get a decent view of the band, people had to either cover their torsos with their arms to protect the vital organs, or actively throttle others in their near vicinity. The audience members toppled and twirled and crashed into one another, bruising arms and stomping on toes, as the Bikini Kill Cover Band banged out punk anthem after anthem, including “Suck My Left One,” “Don’t Need You” and “Alien She.” The loose-limbed pandemonium and screaming electric guitar chords that reigned supreme at Riot Grrrl Night gave femme fatale a whole new meaning while bringing the revolutionary punk-rock feminist back to life –– Kathleen Hanna would have been proud.