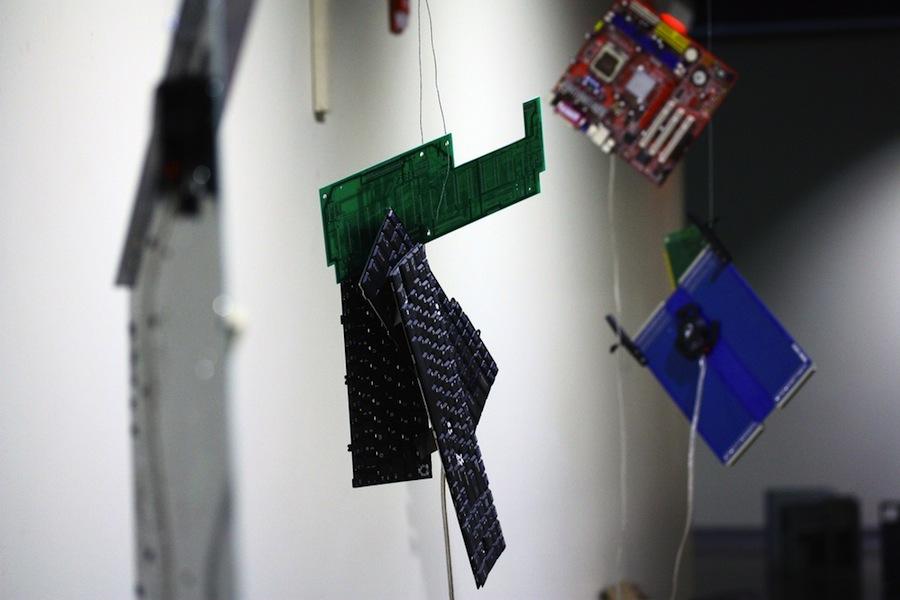 Using a series of gadgets and gizmos aplenty (not to mention whosits and whatsits galore), Conservatory Senior Logan Takahashi collapses the boundaries between the organic and inorganic, envisioning a future in which technology and nature are seamlessly integrated and robots and humans are free to dance with each other at church socials.

On NPR a few years back, Thom Yorke of Radiohead explained the value of electronic music. Unlike strumming a guitar, he argued, sound played electronically doesn’t have to be decoded, re-understood and retransmitted electronically. It plays in its original form directly out of the speakers. What Yorke overlooks in his assessment is the constructed difference between real and artificial: We live in an age where sound and image can be so convincingly rendered by binary codes that they appear equal to or better than their original.

Conservatory senior Logan Takahashi’s Senior Studio art show and TIMARA senior recital, Undergrowth, addresses the misconceptions surrounding the supremacy of technology. The show focuses on the reconfiguration of seemingly artificial technologies into forms that feel more real: By highlighting the organic qualities of frighteningly complex technologies, the artist builds a playful world of digital wind chimes and hanging laptop mobiles. His work reminds us that we are a generation that falls asleep to the wheezing and whirring of our computers.

Takahashi most comprehensively demonstrates his thesis with “Breeze,” in which three fans blow air against 34 contact microphones covered in piezo, a crystal material that responds to energy. When the wind knocks the tiny disk-like microphones suspended by wires into one another against the gallery wall, the contact microphones react to the vibrations caused by the collision, funneling the data through a specially designed computer resonator program that ascribes a distinct tone to each mic. Through this installation, every sound is routed through a distinct lens and projected through a series of speakers.

The result is powerful. The sound heard by the audience looks and feels like it is directly related to the dangling microphones. The difference between abstract technology and physical instrument disappears: No longer weary of the technology, the sound becomes familiar.

“Physical Computing” continues the comfort-sound motif. Hanging computer parts appear suspended like a mobile hanging above a cradle, each piece pleasantly reacting to the touch. At one point, an audience member cupped the instrument lovingly in his hand and pressed his ear gently against it. What he heard was an earlier recording of sounds made by the same object that are then played through the object itself by a device called an audio exciter. Keyboards, motherboards and hard drives become speakers as the vibrations made by human contact trigger a process that actually makes sound emanate from the object in hand.

The effect is a disconnection between physicality and result. Unlike the microphones that create sound through literal contact, these speakers play noises that sound like they are produced on the spot. However, they are not: these sounds are representations, simulations and symbols of the physical connection between touch and noise.

Takahashi is still considering ways to combine the dual concepts of noise-producing and noise-projecting objects. Although it is difficult to configure such an installation with digitized technology, the prototype is all around us. Normal instruments like trumpets, clarinets and our vocal cords create and project sound simultaneously. While Takahashi’s project involves familiarizing the unfamiliar, it may overlook how efficient the familiar is in the first place.

Takahashi’s show also involved a brief performance of original music. Crouched on the floor and rocking back and forth, the artist positioned himself as the focus of a piece featuring haunting dissonant noise, abrupt shouts and escalating pounding sounds. The piece raised questions about the conceptual difference between affecting and generating sound: According to Takahashi himself, by toying with frequencies, he was affecting how the music sounded at any moment. He was also generating the sequence, deciding when to add and subtract sounds just as a pianist changes key. In this sense, authorial command remains an essential component Takahashi’s work.

In the 1920s, the scientist J.Z. Young noted that humans make tools and then mold themselves to their use of them: By using instruments, people change physically. Though always initially abstract or artificial, chairs, cars and cameras became extensions of our existing sensory apparati.

As a forward-thinking proposition, Undergrowth dreams beyond the limitations of contemporary technology to imagine the possibilities of the future. In Takahashi’s utopia, technology and life are integrated seamlessly, simply because the two were never distinct from each other in the first place; producing sound and sight digitally feels no different than strumming or painting. In this world, people don’t condemn digital media so much as they utilize it to create beauty and comfort.