The Oberlin Review • May 6, 2011 • https://oberlinreview.org/4244/arts/yellin-and-lachows-not-so-fatal-attraction/ 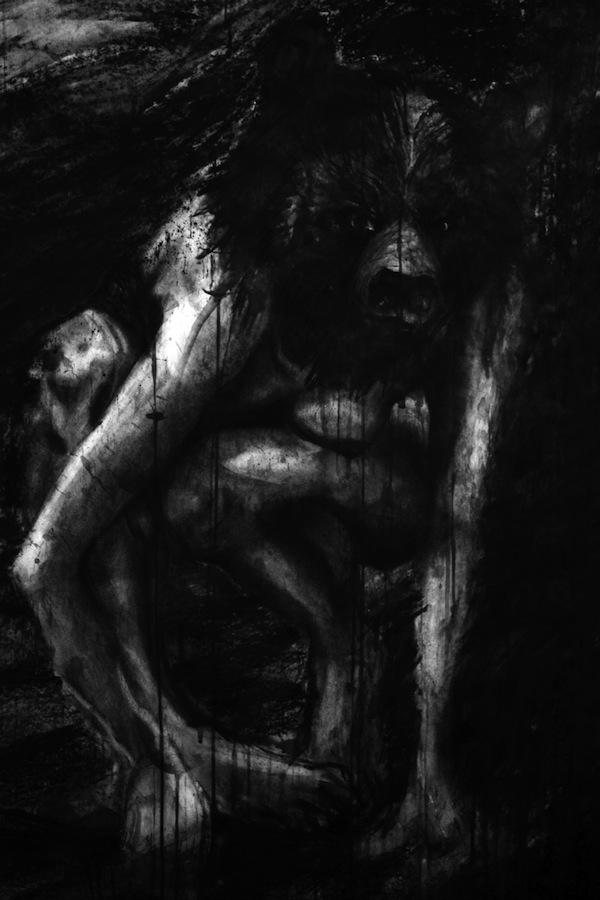 Artists and College seniors Claire Lachow and Isabel Yellin closed out this year’s Senior Studio series with their playful twists on classical tradition and abstract expressionism. Their show, Attraction is a Basic Instinct, created what was simultaneously a dramatic and understated finale to the year’s exhibitions.

Lachow’s work is a clever reimagining of the ancient Greek ritual of arkteia, a ceremony in which, according to Lachow’s artist’s statement, pubescent girls were allowed to “acknowledge their inherent ‘wildness’ before they were tamed by marriage.” Lachow reenvisioned one element of this tradition, a dance involving women clad only in bear masks, in the form of a mixed gender game of duck-duck-goose, in which the participants wore bear masks and (rather ineffectual) flaps intended to provide a modicum of coverage.

As the four actors in bear masks — two men and two women — began their game, the audience grew hushed and remained silent, with the exception of an occasional chuckle. The performers, however, seemed unfazed by the collective gaze of their fellow students and professors, for the most part moving with fluidity and ease.

The performance was a great success in addressing Lachow’s stated goal of subverting the ritual’s normative female roles, while simultaneously emphasizing the practice’s celebration of innate, yet often repressed, human attributes such as playfulness, spontaneity and physicality. Lachow’s drawings were also strong, both in technique and in their ability to continue her intepretation of arkteia. They also used fur to imbed the work with a sense of tactility and physicality.

Like her collaborator, Yellin sought to evoke fundamental instincts of humanity. Her artist statement acknowledges the importance of our attraction to objects that are aesthetically captivating. This instinctive, instantaneous attraction is crucial to the viewer’s continued investment in a given piece of art, as well as to the viewer’s ability to analyze the deeper thematic complexities of the work.

Senior Isabel Yellin went to great lengths to draw the viewer in for a closer look.

While all of Yellin’s paintings merit extensive analysis, some of her pieces are more successful than others in establishing this crucial aesthetic engagement. Three of her works, “Unsettled,” “Float Away” and “Exploding Horizons,” achieved this fundamental connection between image and idea superbly through their materiality, composition and geometry. “Exploding Horizons” was particularly fascinating: Although the work was as light, ethereal, violent and explosive as the title would suggest, these attributes together conjured up something akin to a post-apocalyptic take on a Turner watercolor, which were precisely the sort of visceral associations that Yellin seemed interested in generating in the viewer. The attractive surfaces and textures, of “Float Away” and “Unsettled” also allowed plenty of opportunity for subconscious, free association.

Yellin’s “Seep” series, a sequence of three glue-and-ink paintings, was not quite as successful. While a close-up look at the works revealed that they were rich in fractal geometry and diversity, they failed to sufficiently entice the viewer from afar. Indeed, many visitors to the gallery seemed inclined to pass them for Yellin’s more forceful, emotionally compelling works.

Overall, however, both Lachow and Yellin’s fundamentally distinct works succeeded in making us aware of our more basic emotional instincts as viewers and aesthetic appreciators, providing a solid conclusion to Senior Studio 2011.