The Oberlin Review • May 6, 2011 • https://oberlinreview.org/4268/arts/ocircus-leaps-back-to-the-future-with-time-travel-show/

OCircus! Leaps Back to the Future with Time Travel Show 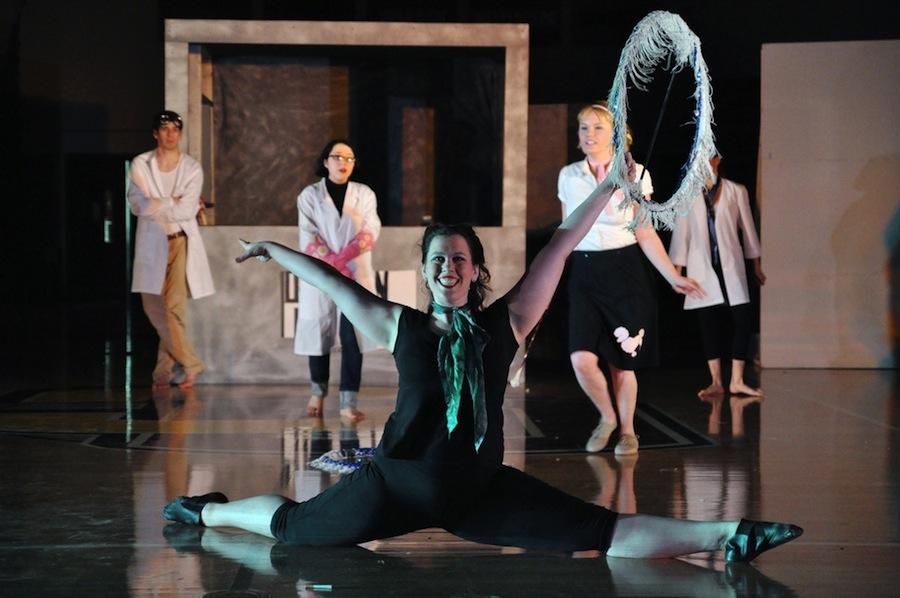 ountless children have dreamed of running away to the circus, but what about time traveling away? Last weekend, College first-years Annie Minette and William Passannante and College junior Daniella Sanchez did just that before excited audiences in A Circus in Time, OCircus!’s spring show. The trio adeptly played a group of amateur scientists toying with lab equipment better left untouched. As a result of their folly, they sent themselves hurling through time in a machine that sounded remarkably like the TARDIS, a time-traveling contraption from the television series Doctor Who. Their laugh-out-loud slapstick perfectly bridged the various acts of the show, with each one taking place in a different year, ranging from 13.8 billion B.C. to the year 3000.

The performance started somewhat slowly, opening with a large group of Russian peasants from 1911 who created various impressive human pyramids. Although it went along with no noticeable hitches, the act did not feel very smooth due to the rather mechanic motions of the performers, especially compared to the following group of exciting jump ropers of all ages performing mind-boggling, often synchronized tricks. Despite making a few mistakes, the jump ropers performed with an infectious excitement, demonstrating tricks that one would have never even have thought to try with a jump rope.

After the group of scientists proceeded to the year 1927, the show picked up momentum fairly quickly. There, they encountered a bevy of swing dancers who performed an adorable, upbeat number to “A Tisket, A Tasket.” The group performed flawlessly, proving that even seemingly simple pastimes like swing dancing can be complicated and endlessly entertaining to watch.

The following act, featuring Conservatory senior Samantha Nahra and College senior Rachel Sciulli twirling batons to Grease’s “We Go Together,” was even more adorable than the preceding one. Although the duo, dressed respectively in a cat suit and poodle skirt, made mistakes throughout their performance, they kept smiling brilliantly throughout. The adorableness of their act was offset by a beautiful scene set in 13.8 billion B.C. — presumably intended to represent the formation of the Earth — in which College sophomore Jennifer Ward led seven or so poi artists in a mesmerizing display of glow poi.

Other OCircus! highlights from this year included College First-Year Cristia Johnson’s 1482 Parisian peasant dance, as well as aerialists College sophomore Adiel Kaplan, College first-year Sam Karpinski, College third-year Sam Sterman and College senior Matthew Willner performing an excellent interpretation of the moon landing. Minnette later did her own solo on aerial silks, a nearly flawless performance made even more impressive by the fact that her costume, though beautiful, frequently fell onto her face. She was preceded by a skillfully choreographed acrobalance act set in ancient Rome, performed expertly by a group of statues. Additionally, the stilt walkers in the year 3000 were both entrancing and entertaining in their metallic costumes and makeup as they chased the show’s three heroes about the stage.

The last act, the tumbling Vikings of 1041, was slightly underwhelming after the incredible physical feats showcased in many of the previous acts. However, the act provided a good laugh, especially when Passannante joined the tumblers with several silly, failed attempts to be a good Viking. In the end, many audience members left with broad grins on their faces, proving that contrary to what your parents may tell you, running away — or time traveling away — to the circus pays off.