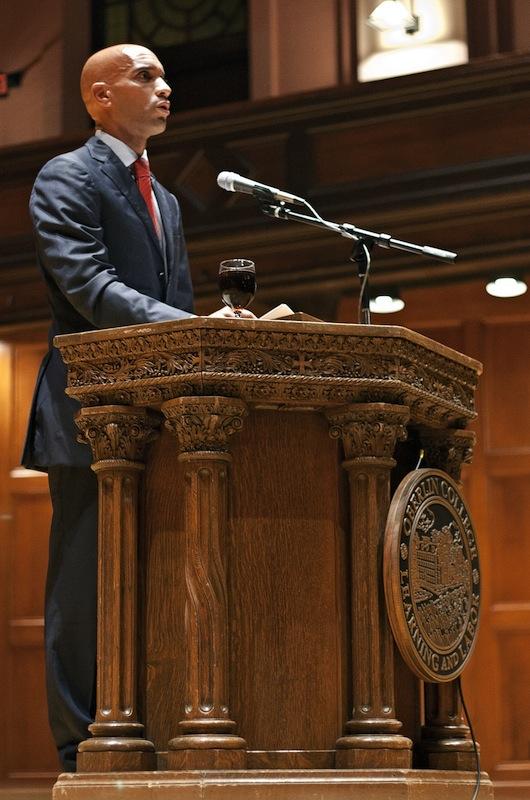 Former Washington D.C. mayor and visiting professor Adrian Fenty addresses a crowd at Finney Chapel in the first convocation of the school year.

Former Washington, D.C., Mayor Adrian Fenty, OC ’92, stood in Finney Chapel on Tuesday evening for the first time since his term ended. This time it wasn’t as a student, but as the College’s first convocation speaker of the semester.

Fenty will continue his involvement with his alma mater in the upcoming months. By serving as a distinguished visiting professor in the Politics department. He is currently co-teaching a politics course titled American Government: Politics and Policy with his former professor Paul Dawson. Part of the course will focus on policy lessons that can be derived from Fenty’s time in office. Fenty’s speech both gave a glimpse of the types of policy lessons that will be discussed in the course throughout the semester and described how many of his first political lessons were learned at Oberlin.

“Oberlin provided me with a quintessential liberal arts education that prepared me for everything,” Fenty said. Although he was an English and Economics major, Fenty was interested in politics when he came to Oberlin. In an interview earlier that day, Fenty insisted that both the College’s students and professors, including his friend and mentor Dawson, strengthened his initial passion for politics. Fenty took advantage of his summer breaks and Winter Term by working on local campaigns and interning for congressmen. His classroom experiences built off of the political lessons he learned from his activities and work experience.

He spoke of how the lessons he learned as an Oberlin student helped him succeed politically: “Waiting [to run] was not the Oberlin way.” This conviction helped motivate him to become politically active, ultimately leading him to serve on City Council and as the District of Columbia’s youngest mayor at age 36.

Fenty insisted that this same courage allowed him to make politically tough decisions, especially when it came to the D.C. public school system.

“I made politically costly decisions to bring about change,” Fenty said. As Mayor, Fenty said that he was willing to make controversial decisions if it was the only way to do things like increase test scores and secure qualified teachers in a short period of time.

Fenty admits that this statement later became prophetic, as he was defeated during his run for re-election in 2010.

During his speech, Fenty cited Martin Luther King, Jr., as someone who had largely shaped how he viewed politics. He explained that King’s writings helped him find the strength to sacrifice everything in the name of change. Thanks to this philosophy, Fenty feels little regret about how his political career has gone thus far.

“I believe that the purpose of being in office is to get things done, not to get reelected. … When I took office in 2007, I believed that the government should be measured most for what it does for the least [of the people].”

Fenty’s confidence may also stem in part from the fact that Fenty has now spent a significant amount of his life in politics. Fenty spent six years as Ward 4 city councilman and four years as mayor. The man who was once a student sitting in the pews of Finney Chapel has become both a seasoned politician and a teacher, eager to share his life’s lessons with a new generation of Obies.