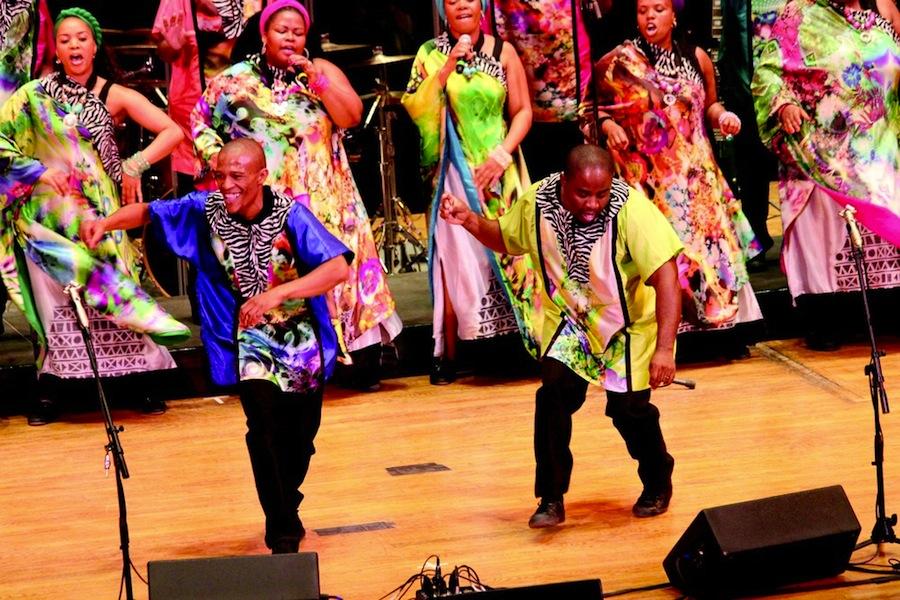 For the first event of the semester in the Convocation Series, the Soweto Gospel Choir packed the pews of Finney Chapel full of students eager to hear their Grammy award-winning music.

Oberlin students and community members filled every pew in Finney Chapel, eagerly anticipating a sure-to-be-spirited performance from the Soweto Gospel Choir as the first event in this semester’s Convocation series.

Hailing from South Africa, the group has traveled the world since its formation in 2002, accumulating fans and earning critical accolades including several Grammy awards and nominations. On Tuesday night, the Soweto Gospel Choir won over the hearts and dancing shoes of Oberlin as well.

The music began with the singers offstage, their voices floating out to the audience as if from a distance. As they drew slowly closer to the darkened stage the audience’s anticipation mounted. Finally revealed in a colorful flash, the choir burst onstage to the applause of the crowd.

In the nearly two hours that followed, the group treated concert goers to a lively mix of songs, including traditional South African hymns of praise, African and American folk tunes and covers of contemporary pop songs. Some of the highlights included “One Love” and “Shosholoza,” but all of the songs elicited a delighted response from the crowd.

The 20-plus members of the choir wove each song into a tapestry as colorful as their silky costumes and as beautiful as their wide smiles. Each voice had a unique tone: some were mellifluous and pure, while others had a more raspy, soulful quality.

For most songs, one or two vocalists would take the lead, letting their individual talents shine while the other singers blended into a velvety and jubilant background. But vocal talents were not the only things on display. Two drummers played djembe during most of the tunes, beating out an infectious rhythm. On the more pop-style numbers, the singers were also accompanied by a keyboardist, drummer, guitarist and bassist.

In addition to employing more traditional instruments, the choir transformed Finney’s stage into a drum, as the singers revealed themselves to be also talented foot-stomping dancers. Their high-kicking stomps, tapping feet and enthusiastic clapping created an atmosphere of earnest and unabashed joy through movement and music.

Although there were some deeply touching, more subdued moments, for example the performance of “Bridge Over Troubled Water,” the tone of the evening was overall quite lighthearted. One part of the performance turned into a campy sing-off between the men and women of the choir, full of playful taunting. The energetic dancing of the performers, the cheerful sounds of their voices and the bright colors of their costumes all contributed to a joyful atmosphere.

Even though it was hard not to move along to the beat, it took a while for the audience to actively participate in the musical experience. When the choir broke into “This Little Light of Mine,” however, the whole chapel clapped in time as the warm tones of the baritone soloist vibrated the floorboards.

Not overly choreographed, the dancing choir’s was sincere and impressive. The performers, even inspired some audience members to get on their feet and dance in the shadows of the chapel. One of the drummers showed off with some break dancing and an amplified variation of the worm, which received shouts of delight that he acknowledged with an understated nod.

Slowing the tempo and swaying gently, the choir did a beautiful rendition of “Angel” with a guitarist taking the lead. The faces of the singers expressed sincere emotion and their spine-shivering voices conveyed both sadness and hope. At the conclusion of the song, the audience gave a standing ovation, and the concert could have ended there. However, the group returned to sing three more songs, and end on a more celebratory note.

During their encore, the singers urged the audience to their feet to dance and clap along to the music, and the crowd obliged. As the most enthusiastic among the listeners surrendered to the beat, dancing in the aisles, the joy in the room reached a fever pitch. The Soweto Gospel Choir positively radiated happiness, and the jubilant mood they created was the kind that you wish you could bottle up and save for later, the kind of happiness that sustains and nourishes.