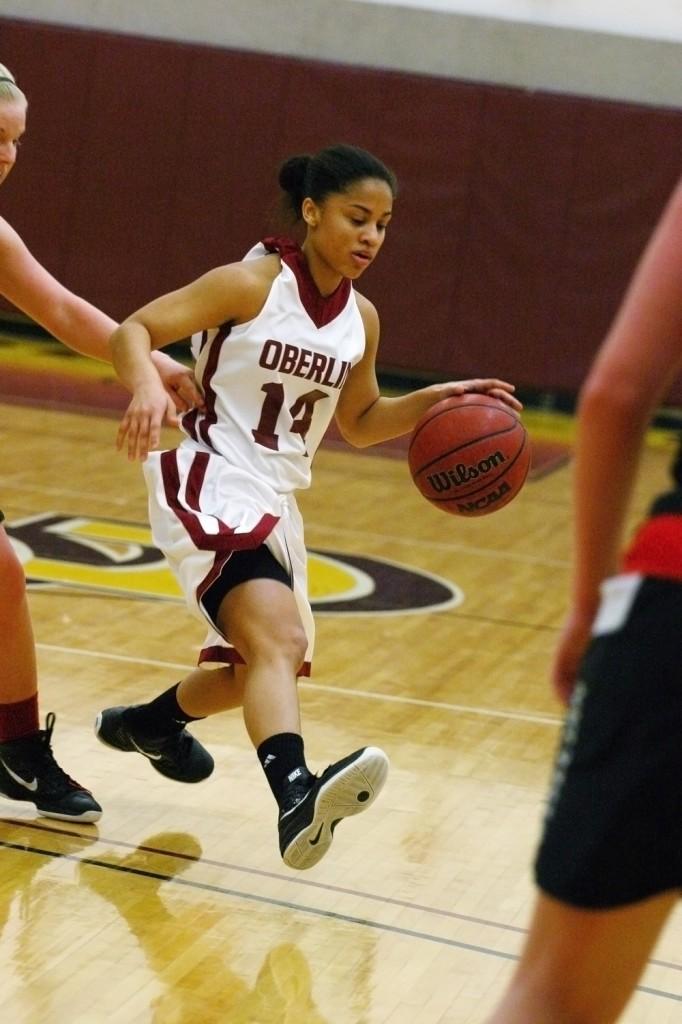 Sophomore Malisa Hoak hunts for the basket against Wooster.

Fortunately, the Yeowomen needed only one win to secure a spot in the North Coast Athletic Conference playoffs – and they got it against the Fightin’ Scots.

“Eight out of the nine teams in our conference go to the tournament,” explained sophomore guard Lillian Jahan. “We were tied with Wooster and if we didn’t beat them, we probably wouldn’t have made the tournament.”

And Friday night, the Yeowomen showed just how much they wanted to make it. Sophomore forward Allison Gannon led the way with 16 points and 11 rebounds, her second double-double in as many games, but said that the win was really a team effort.

“All nine of us contributed and really stepped it up,” reflected Gannon. “It was one of those games where no one stood out because everyone was playing their best.”

“We were all really excited for the win,” said Jahan, who chipped in 10 points and three steals. “It felt good to beat a good team – but we had to not get too excited because we had an important game the next day,” she added.

The Yeowomen brought this momentum to their game against Ohio Wesleyan on Saturday night, though it was not enough to propel them to victory. The Yeowomen controlled the start of the game and ended the first half up 39–35. But the Battling Bishops came back to tie the score at 65 at the end of the second half, sending the game into overtime.

“We should never have even needed to go to overtime,” Gannon lamented after the game. “We didn’t make the adjustments we needed to in the beginning of the second half.”

“We just didn’t make the necessary adjustments at the right time,” Jahan added. “It was just not our day.”

The Bishops outscored the Yeowomen 7–16 in the extra period, resulting the 72–81 final score.

“Every conference game is a grind, and it depends on which team out-rules the other,” noted Gannon on the game they let get away. “That should have been us.”

The Yeowomen have two more games left before entering the NCAC tournament.

“It’s important to finish strong,” commented Jahan. “If we end on a good note this year, hopefully that momentum will carry through to next year.”

The last home game will be this Saturday afternoon at 1 p.m. against the NCAC-leading and nationally ranked DePauw University. The team will be participating in the Women’s Basketball Coaches Association Pink Zone initiative and encourages all students to come wearing pink to support the Yeowomen.