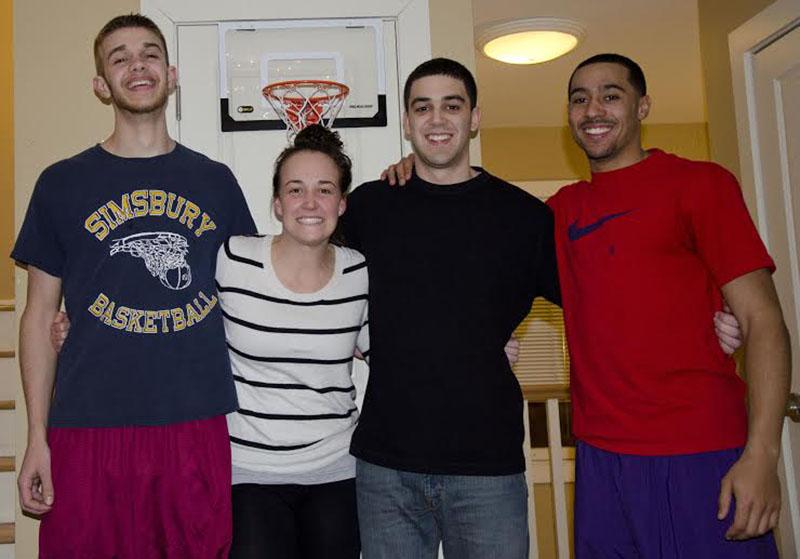 Lillian Jahan: I love it. I have been hoping that this would happen since freshman year, and it’s been a lot of fun.

Derrick Sant: It is definitely a lot of fun. The four of us have been extremely close since our freshman year, and we had been planning to live together for a while.

What have you learned about each other this year?

Geoff Simpson: Lillian likes the house freezing cold. Basically for the last four years we have lived together without actually living together. We have spent so much time together and so we know the types of things that set each other off.

LJ: We’re good at finding what sets each other off.

GS: But we also know when not to cross the line.

EL: Geoff is the messiest.

DS: But EJ [Lewis] is definitely the cleanest.

LJ: Geoff cooks the most, but we all use the oven and microwave. We like to heat things.

GS: I cook a decent amount because I only have five dining hall meals a week.

LJ: I like to cook breakfast. Over Winter Term I would cook every morning.

How was Winter Term?

LJ: It was a lot of fun, and it went by really quickly.

GS: Winter term is a lot better when you live in a house.

EL: It was definitely the best Winter Term in my four years here.

LJ: I think the most exciting part for my team was the opportunity to go on longer trips and spend more time together. It was really great getting to know each other, hanging out and playing basketball. Although our record does not show it, we played some incredible basketball over break and had a few very tough, but close games.

GS: I think the coolest thing for us over break was our win last weekend against DePauw University. January was an up and down month for us in terms of wins and losses, but it felt like we progressed throughout the month, and by the end we were able to upset a ranked team; it was a big moment for us.

Emmanuel, how did you feel after scoring the game-winning basket against DePauw?

EL: I was really just trying to do whatever I needed to do to help the team win. I don’t think that my show is any more valuable than the whole team effort involved in the win. We grew a lot as a team over Winter Term —regardless of wins and losses— but last Saturday’s game was really big for the team in terms of growth and moving forward for the rest of the season and future seasons.

Do you have any special pre-game rituals?

LJ: I try to do the same thing before every game. I wake up early and always get shots up on my own. During the first half of our warmup, a Lady Gaga song comes on, and no matter what we are doing, everyone stops and watches one of our freshman teammates, Connie, do a little dance.

GS: We don’t really have many team rituals; we all just do our own thing and listen to music with our headphones on. I literally do the same thing every game before I step on the court. EJ pretty much does the same thing, too. Last year before our first game, some of our freshmen wanted to have a dancing circle, so we tried it, but then we lost by 35 points and have never done it since.

What do you expect for the last few weeks of the season?

LS: I have high expectations. Last weekend we played DePauw, a team that is ranked number one in the country. We played them closer than any other team has in the last three years. I think that game showed that we can play with anyone, especially in our conference. We have a long stretch of conference games ahead of us— all games we can and should win— so I have very high expectations, because we have not even reached our peak yet.

GS: We still have a lot of work to do in terms of reaching the conference tournament and fulfilling our team goals. But, at the same time, once a game I want to be able to stop and enjoy what I’m doing, because this is the last time we are going to be able to play and be on the court together, and I am definitely going to miss that next year.

If you could join any NBA team, which would it be?

What’s one word to describe each other?

LJ: EJ is “Mr.Clean,” and Geoff has to be something with sleeping.

What’s the best piece of advice you have ever been given?

LJ: Live in the moment.

EL: I’ve got one better: YOLO.