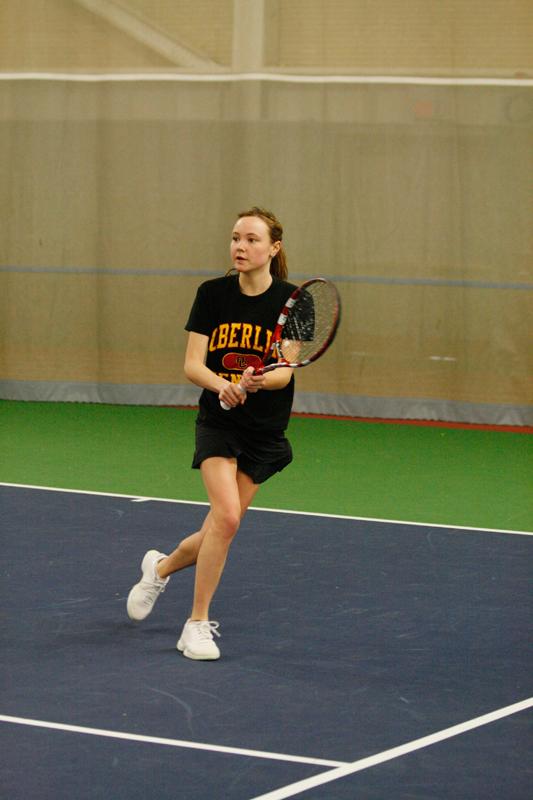 Junior Grace Porter eyes the ball inside the Heisman Club Field House. The women's tennis team is off to a 1–2 start this season.

Coming off a solid 9–0 victory Saturday against the Baldwin Wallace Yellow Jackets, the Yeowomen were unable to withstand their competition Sunday as they took on the Case Western Reserve Spartans, ranked No. 25 nationally, losing 6–3.

Playing on their home court, the Yeowomen started out strong as ITA Central Region’s fourth-ranked player, senior Brenna Sheldon, soundly defeated her opponent Marianne Bonanno in the top spot, winning straight matches 6–1, 6–3 to secure the first point for the Yeowomen. On a team that is primarily underclassmen, lone senior captain Sheldon has excelled at stepping up to lead the team.

“The team has changed a lot since I was a freshman. I think leading by example is the best I can hope to do for the team,” said Sheldon. Her success has greatly contributed to the growth and cohesion of the team, but she also credits “the younger girls who inspire [her] to work harder everyday.”

One of these younger girls is first-year Olivia Hay, who on Sunday put up a fight in a nail-biter against opponent Lauren Rover. Hay lost the first set 6–1 but returned on fire to win the second set 6–1. She then surged forward to break the tie, but couldn’t outlast Rover in the one-game super tie-breaker.

Despite her loss, the team is optimistic about Hay’s potential for this season. “She fought hard, so that’s a really good sign for her future and hopefully she gained some confidence from that match,” said Sheldon. Even though some girls “didn’t play their best,” Sheldon sees this falter as an opportunity for growth, “because we all have lots of room for improvement going into next weekend and the rest of the season.”

In the doubles matches, the Yeowomen were only able to secure one point coming from the second spot, as dynamic duo Sheldon and sophomore Erin Johnson resisted Surya Khadilkar and Sarah Berchuck, to win 8–6. In the first spot, junior Grace Porter and first-year Emma Brezel  fell 8–4 to the Spartans. Hay and sophomore Ariana Abayomi had a heartbreaking loss as well, losing 8–4 at No. 3.

“I think that all our doubles teams are working together really well considering that all our doubles pairings are new this year,” said Johnson, who excelled with partner Sheldon this past weekend.  As a weakness, she noted that “many of us struggled with mental toughness. All of us can compete with all the Case girls when it comes to the physicality of tennis. The youth and inexperience of our team got in the way of our focus when the competition got tough.”

Coming off one of these tough doubles losses, Abayomi bounced back to have a standout performance in singles at the fifth spot, winning her first set 6–3, before falling to opponent Sarah Berchuck 6–1. Despite the brief lapse in play, Abayomi went on to power through her one-game tie-breaker and defeat Berchuck, claiming the third point for the Yeowomen.

The Yeowomen have high hopes going into the rest of their spring season and are looking to improve their endurance and finish strong in all their matches. “This year we are going to leave everything on the court no matter what, and finish every match with no regrets,” said Abayomi.  “If we do, we will be ready to battle any team.”

The Yeowomen have their next match on Saturday at home against the Otterbein Cardinals at 2 p.m.