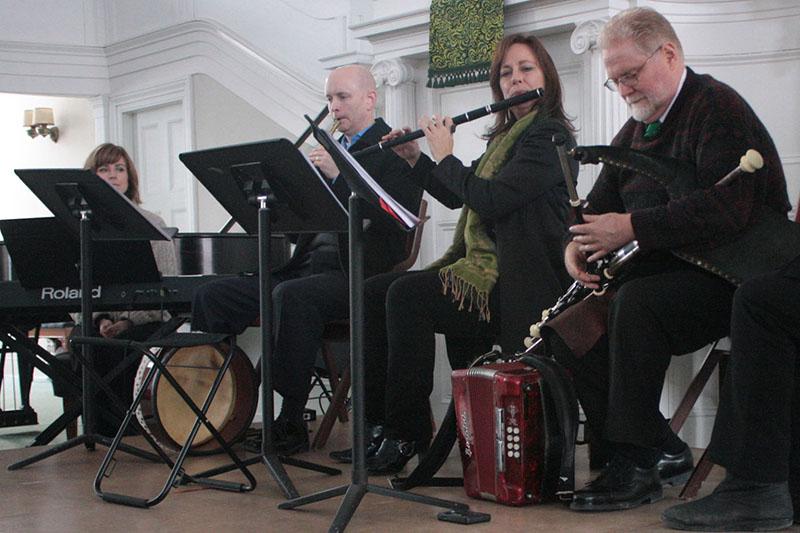 Members of local band Turn the Corner perform traditional Irish music at the First Church in Oberlin. The charity event was organized by Family Promise of Lorain County to help house and feed the local homeless.

The transporting beauty of Irish music rang loud and true at the First Church in Oberlin on Saturday, Feb. 8. With the sun finally out from behind the clouds and the vast space of the church filled with elderly residents, a sleepy, surreal quality pervaded, which was only made more powerful by the soft Celtic melodies. Family Promise of Lorain County, an organization that provides food, housing and support to homeless families, organized the event and local band Turn the Corner, which has played and given workshops at the Conservatory, provided the music. The afternoon was awash with respect for those living less fortunate lives, and Family Promise took donations at intermission. As Turn the Corner bandleader Michael Kilbane reminded the audience during song breaks, traditional Celtic music is based in peasant roots, and has none of the grand classical flavor of other Western European genres. As such, it was a perfect choice for a day of reflection about what one can do to help others.

For the non-God-fearing in the audience, there was blessedly little preaching or sermonizing, as the religious heads of the church focused on fostering a sense of community. Family Promise works by volunteering church-goers’ homes to people in need. At intermission, three people came forward, all of whom were formerly homeless and found shelter through the organization, and delivered heartfelt, impassioned testimonials about how Family Promise had changed their lives. A rustling sound overtook the audience as the three left the stage — attendees pulling out their checkbooks for sizable donations.

The music itself was wonderful. While high-quality live Irish music is not exactly hard to come by around here, Turn the Corner set itself apart with sheer musical variety, covering as wide of a scope of Irish music as possible, each different style and song expertly performed and brilliantly composed. Each of the 11 songs followed, for the most part, a different discipline of Irish music. There were jigs, reels, polkas, slides, hornpipes and more — some that inspired you to get up and dance, others to sit and let the interlocking melodies lull you to sleep. And interlock they did, with one movement flowing into the other, giving the band the chance to utilize many different instruments and tempos per song. The last piece, a combination of several different styles and tempos, was a stunning finisher, weaving the slow and the fast together at a breakneck pace that made for a satisfying conclusion to a rewarding concert.

The one wrinkle in the whole event came from overly long breaks between songs and the questionable quality of the content that filled them. Kilbane, funny and genial leader of the band and the event’s impromptu host, tended to throw in off-color jokes with casual Irish wit, which proved hilarious to college students, but aggravated some parents during what was supposed to be a “family” event. In addition, it seemed no one was happy with the length at which he spoke between songs, describing in painstaking detail each tune and its origin. While initially interesting, the exercise soon grew tiring as the descriptions dragged on and Kilbane got lost in uninteresting tangents. The first time he told the audience about the penniless fiddler who wrote the next tune, it was delightful; by the fifth time, it was tiresome, dragging the one-hour event into ninety-minute territory.

After the concert, however, the one thing that stuck with the audience as they returned to the outside world was the enchanting music, beautifully performed and crafted, passed down over centuries, earnest and old. Here’s to the next time Irish music comes to Oberlin and the next. It’s a joy every time.