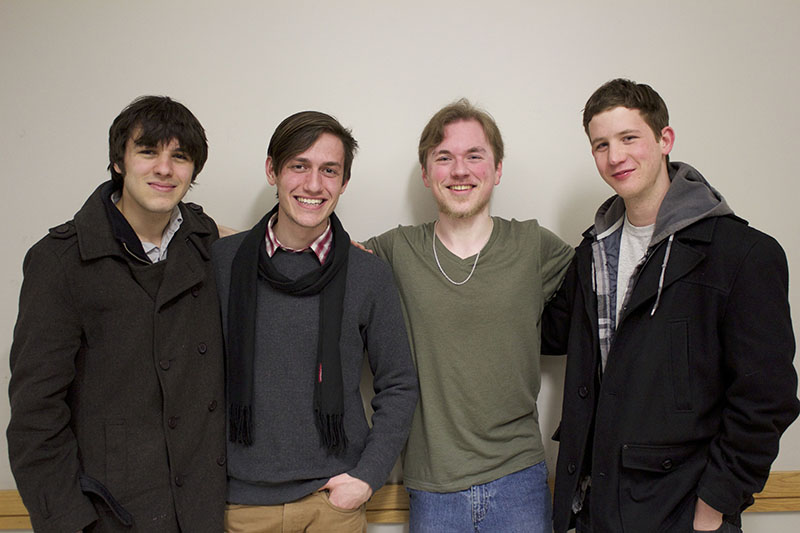 This week the Review sat down with senior bowling members Johnnie Kallas, Eastman Presser, Griffin Sabelli and David Morris to discuss their first bowling experiences,Tom Reid and the challenges of mental preparation.

When did you first learn to bowl?

Eastman Presser: I think I had a different experience than the three of these guys, because I did not bowl seriously before I came to Oberlin at all. If you told me that I was going to be on the bowling team, really at any point in my life, until I committed to being on the bowling team, I would not believe you. I bowled at birthday parties for friends as a kid, but I remember during orientation week there was free bowling at the bowling alley for freshmen, and myself and my friend Morgan, who is also on the team, would go every week because we realized we really liked bowling.

Johnnie Kallas: I got into bowling in 7th or 8th grade. I started taking it seriously right away. I joined my high school varsity team in 8th grade. I bowled throughout high school, and I really, really took it seriously towards the end of high school. I met Tom Reid when I was applying here, and I will say that played a fairly large role in my decision to come here compared to other schools I was looking at.

EP: And you, [Griffin Sabelli] you were born in college lanes basically.

David Morris: I did not ever step into a bowling alley until my sophomore year of high school. From the first moment I stepped into the bowling alley, I was captivated by it. It’s a pretty cool place and the people you find there are the most interesting people in the world. I think I really got motivated to keep doing it with a lot of friends. It’s a competitive atmosphere, but at the same time you spend three hours talking with your teammates. When I got to Oberlin I didn’t join for a few weeks, but Tom Reid, the master of everything that he is, got me to join.

GS: I started bowling probably when I was four or five in bumper bowling in college lanes. My mom was in a league at the lanes, and she signed both my brother and I up for bowling when we were young. That’s when we met Tom. That’s where I first started, but I bowled in leagues for a few years, but that was enough to get me interested. I started joining more leagues and going to different bowling alleys.

How long has the team been around?

JK: I believe Tom created the team in the spring of 1980 and it’s been in existence ever since. At varying points there have been different levels of commitment. But I think it is safe to say that in the last four years we have had people who had already bowled before coming to Oberlin. It’s what made our team more competitive in these last three years than it was previously.

GS: I think Tom was a little jaded about the fact that there wasn’t a team when he was in college, so I think that’s one of the big reasons he started the team, so others would have the opportunity to play.

Who is Tom Reid?

EP: He teaches the bowling classes at Oberlin and coaches the bowling team. He manages the bowling alley and the Cat in the Cream. He is the associate director of the student union as well. He has really been a huge mentor to all of us in several different ways. He is a very knowledgeable man and one of the best bowling coaches that’s around today. I don’t even know a single other bowling coach, but I still feel comfortable saying that. He’s a big reason why I continue to bowl, and his involvement with both the College and the community here, he’s an incredible presence on campus.

Do you have any specific technique that you use?

JK: Bowling is a very misunderstood game. I think one of the reasons it’s misunderstood is because the obstacle is invisible to the human eye. There is oil laid out on the lane and depending on how the oil is laid out, the ball will hook in different places. We all have individual things we do to adapt to different situations.

GF: It’s a really tough question. We all have different techniques, but its hard to say what’s different without seeing them. There are so many things that are different in each person’s game.

How do you get ready for a competition?

EP: We stretch, which I guess is something a lot of people don’t know.

DM: My favorite thing, is that before a contest, it’s a lot of fun. It’s like mentally preparing more than physically preparing. People walk in and out to do their thing, but it’s all about mental preparation because the day is a long long haul. One of the hardest things for us is still being mentally prepared by the end of the day.

EP: Just to clarify, when we go to bowl, it’s like an eight or nine hour day of bowling. It’s nonstop, you get there and practice at 8 a.m. and you bowl from 8 a.m. until 5 a.m. It’s a long day, I’m going to venture and guess that guys are not playing basketball for nine hours a day. It’s really grating on the brain and the heart.

DM: I think it’s grating on the body, but also degrading on the mind. All our preparation really does seem to be mental.

What‘s one piece of advice you could give to noncompetitive bowlers?

EP: If you are in Oberlin, go talk to Tom Reid. Take a bowling class, get involved. It’s the most welcoming environment that I’ve found on campus. The bowling alley has been a home away from home for me.

GS: I think there are a lot of different skill levels on the team. I come across people who don’t think they’re good enough to join our team, when there’s really no level you need to be to join the team.

JK: Take a deep breath, find a target and keep your eye on it.

EP: Transcendental, almost. What I have learned from Tom is that bowling is life and life is bowling.