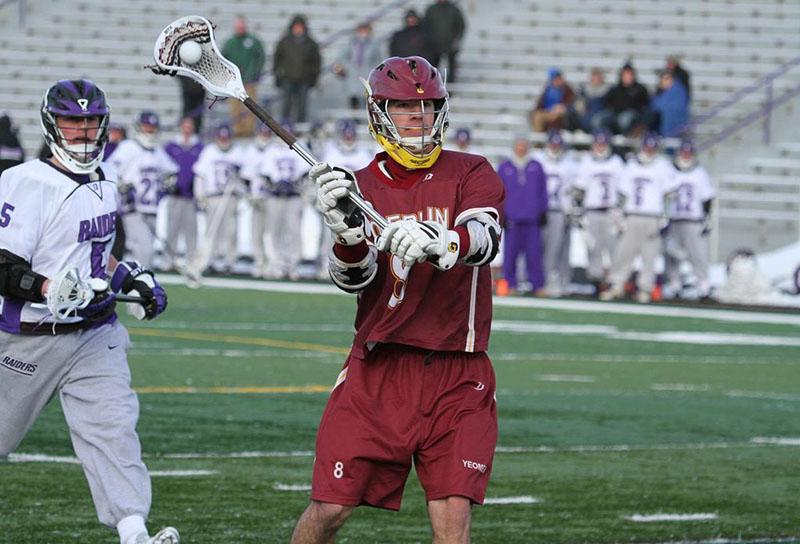 Senior Mickey Fiorillo drives toward the net for a shot against the University of Mount Union Purple Raiders. The Yeomen’s season is off to a 2–1 start.

During the games, the Yeomen employed talent from a large part of the squad, scoring 13 goals from eight different players against the University of Mount Union Purple Raiders. 11 of those goals came from returning players.

Junior and starting goalkeeper Erickson Andrews played all but 10 minutes and along with his replacement, sophomore Josh Kasten, allowed only four goals, while combining on a total of 11 saves.

The more recent victory over the Olivet College Comets was just as decisive, as the Yeomen came away with a 12–4 win. In the game, five different Yeomen scored, while Andrews again played all but five minutes, combining with Kasten on 14 saves.

Though the team was happy with its performance, the Yeomen know the greatest challenges are still to come.

“Although the teams we’ve played haven’t been as high of competition as we’ll face in conference, we handled the games really well and we are progressing every day,” said senior midfielder Matt Rogers.

Senior defensemen Noel Myers said he feels great about starting the season off 2–1 and attributed some of the team’s success to its new found commitment to the program.

“During the first two games, during practice and during preseason we have a lot of underclassmen that have really put in work and are having a great start to the season,” he said. “They’re stepping up and filling voids that have been needing to be filled.”

Returning to the offense are sophomores Alex Wagman and Nick Lobley and senior Connor Jackson, all three of whom were among the top 10 scorers in the North Coast Athletic Conference, averaging 2.79, 3.83 and 2.69 goals per game, respectively. Jackson, who made All NCAC Second Team last spring, and Wagman were also in the top 10 in the conference in assists per game with 1.5 and 1.75 respectively.

The team’s offense has been in full force since the early portion of the season, but the Yeomen believe their defense may be what will carry them.

“With our returners especially, we have one of the best defenses in the conference, maybe even the country,” said Myers.

Livingston agreed, noting that Andrews’ play will be a boon to the team’s efforts this season.

“Erickson is definitely the top goalie in the conference, and with our defense we have a chance to be unstoppable this year,” he said.

Ideally, though, the team’s offense and defense will work in unison.

“The defense really sets things up — it re ally gets the offensive momentum going. Get ting stops and forcing turnovers gives the offense more opportunities and just changes the energy of the game,” said Myers.

The Yeomen hope to rebound from a recent 6–5 overtime loss to Albion College when they face Capital University on Saturday at 1 p.m. Due to inclement weather, the home game has been moved to John Carroll University in University Heights, OH.