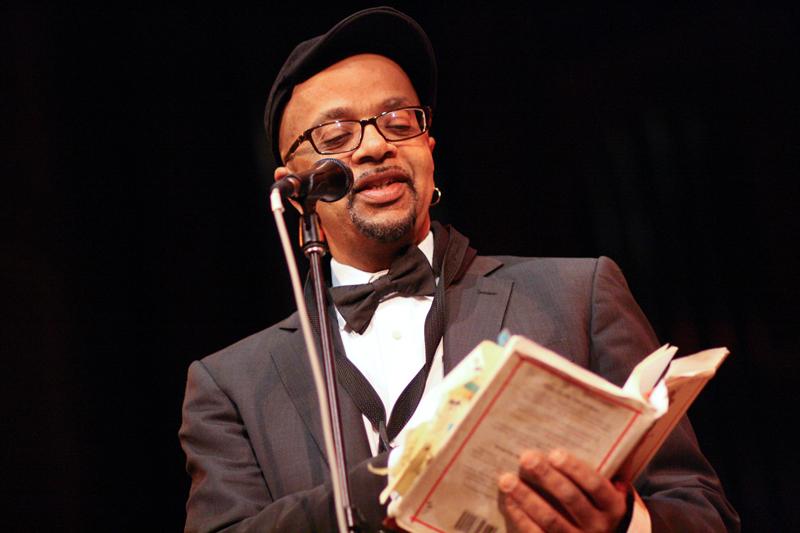 James McBride, OC ’79, imparts wisdom to the audience in a quiet moment at Wednesday’s uplifting convocation. McBride, a novelist and musician, read excerpts of his novel The Good Lord Bird and played saxophone during the rousing musical interludes provided by his talented musical ensemble (not pictured), nicknamed “The Good Lord Bird Band.”

To call James McBride, OC ’79, a writer is to capture only a small fraction of what the man is capable of. While his 1995 memoir The Color of Water: A Black Man’s Tribute to His White Mother spent over two years on the New York Times bestseller list and his most recent novel, 2013’s The Good Lord Bird, won the National Book Award, McBride is also a prolific musician and an award-winning composer. Fortunately for fans of music and the written word, both of McBride’s exceptional talents were on display at his convocation Wednesday night. Supplemented by a startlingly talented musical ensemble, affectionately termed “The Good Lord Bird Band,” McBride dispensed cheerful life advice, read excerpts of his work and filled Finney Chapel with rousing gospel.

After President Krislov’s introduction, McBride entered Finney alone, looking out of place on a stage crammed with instruments. To the audience’s clapping, he deadpanned Sally Field’s iconic phrase, “You like me, you really like me,” before beginning to speak in earnest. “I’m always nervous when I come back to Oberlin,” he said, sparing a few words to reminisce. McBride recalled with disgust the rubber apron he had to wear when he washed pots in Dascomb. Once, a visiting speaker in Lord lounge backhandedly chastised McBride and the other black students assembled by insisting that someone, presumably civil rights activists, had died for them to be there. Not that McBride was thinking that deeply at the time. “I don’t want to hear this crap, man,” he said. “I want a girlfriend!”

More seriously, McBride dispensed wisdom to the audience by recounting an incident he had witnessed while he was a student. Actor Laurence Fishburne was reciting from Othello when, as McBride watched, he forgot a line. According to McBride, Fishburne stepped back, thought for a moment, recollected the line and completed the monologue with dignity. “Learn how to fail,” McBride said.

Following these anecdotes, McBride got down to business, reading an excerpt of The Good Lord Bird. The novel concerns Henry Shackleford, a young slave who, mistaken for a girl, is spirited away by John Brown of Harpers Ferry fame. McBride’s prose is warm and clean, punctuated with humorous bits that elicited appreciative chuckles from the audience.

Then McBride sat down at the piano. “I’ve killed many a piano in my days, and this piano is about to die,” he said, with what quickly proved to be excessive modesty. McBride shared a short anecdote about filling in for his sister playing piano at his church as a child, demonstrating the off-key mess that would result “if somebody got the spirit in the key of D flat” before the real music started. McBride introduced his band as they took the stage one by one and began to sing and play: Trevor Exter on bass and cello, Adam Faulk, OC ’02, on piano, Show Tyme Brooks on drums and Keith Robinson on guitar. Faulk and McBride quickly switched places, and McBride walked toward the front of the stage, where he took up a saxophone, adding it to the energetic rendition of the classic spiritual “Glory, Glory (Lay My Burden Down).”

Once the music was put into the mix, the ingredients for the evening were all assembled — music, readings and McBride’s pithy commentary — and the three were recombined in different variations for the remainder of the convocation. After a few more songs and readings, the quintet performed the marching song “John Brown’s Body” (more familiar as the tune of “The Battle Hymn of the Republic”), a particularly appropriate choice considering the subject of McBride’s book. Then, McBride read a moving letter by John Copeland, an Oberlin College student who followed John Brown to Harpers Ferry. While he spoke, about 15 Conservatory students, many bearing instruments, filed soundlessly onto the stage. Following the letter, McBride urged the students in the audience to “drop cynicism and adopt skepticism,” promising them they would “find the space to make a change.”

During the protracted final song of the night, “Let the Church Say Amen,” McBride and his band gave each of the assembled Conservatory students space to make a change, allowing each small group an improvisational solo. The gesture could have made the convocation’s ending lag, but the undeniable talent of the student performers and the amount of fun everybody on stage was obviously having inspired a feeling of camaraderie in the room. The link between McBride’s books and his music is that he uses both to bring people together, and his convocation was a perfect example of that.