Profile: John Cavanaugh on the Art of Piano Tech 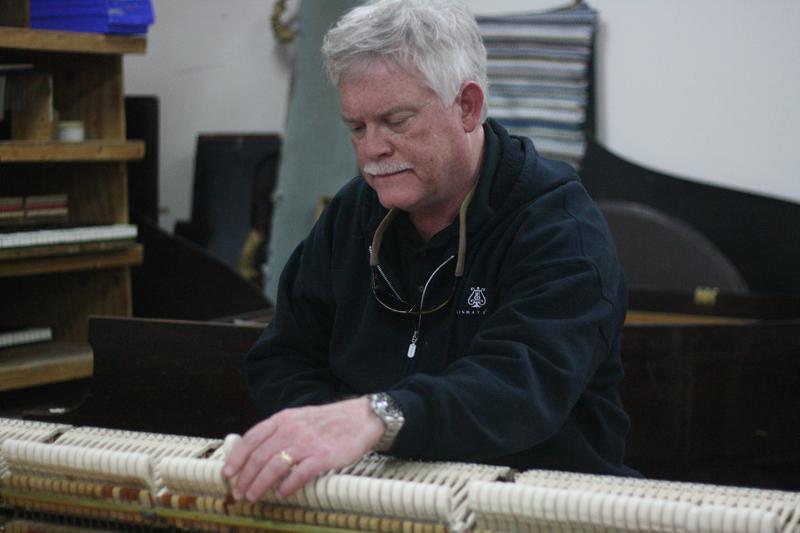 Conservatory piano technician John Cavanaugh works on a Steinway piano in the piano work- shop in the basement of Bibbins Hall. Together with a staff of three others, Cavanaugh tunes and maintains the 234 pianos which fill the Conservatory, as well as adjusts pianos to meet the specific needs of visiting pianists for their recitals.

The classic recording of “Christmas Time Is Here” from A Charlie Brown Christmas drives John Cavanaugh crazy. However, it’s an occupational hazard to which he’s accustomed. The Director of Piano Technology at the Conservatory, Cavanaugh has developed a highly trained ear over a lifetime of focused listening, so the off-key piano melody strikes him as particularly annoying.

“The piano is so out of tune,” he says, though he concedes that the imperfection does lend something to the rendition. “When you hear some of these [same] Charlie Brown tunes that Vince Guaraldi did, and the piano’s perfectly in tune, it’s not the same. It’s not good. I mean, sometimes it’s OK for the piano to be a little bit stinky and ripe, or whatever you want to call it. And so you just go, ‘So it’s a little out of tune; I can handle it,’ and try and listen to the music.”

If you’ve never had a reason to wander into the mysterious piano workshop in the basement of Bibbins Hall — a cluttered workspace, which sometimes contains as many as seven pianos in various stages of renovation — you’ve probably never met Cavanaugh. With an unassuming, methodical demeanor and a dry sense of humor, Cavanaugh, who has worked at Oberlin since 2001, is one of the Conservatory’s best-kept secrets.

It’s 9:30 a.m., and as Cavanaugh talks, he puts the finishing touches on a piano he’s just tuned for a morning master class in the David H. Stull Recital Hall. The rest of his day will be spent overseeing a variety of piano repairs and working with a staff of three other technicians — two full-time and one part-time employee, with an additional part-time position to be added this fall. Together, the technicians are responsible not only for making sure the Conservatory’s concert pianos meet the specific criteria of the renowned pianists who perform here, but also for keeping the Conservatory’s 234 Steinway pianos — which fill practice rooms, professor’s offices and various performance venues — in working order.

“Over the years students will say, ‘Oh, these pianos in the practice rooms are awful,’ and then they go to grad school and then they find out that this place wasn’t so bad,” Cavanaugh says. “You know, [the schools] put them in a little sarcophagus to practice. No windows, and then the piano’s like this little Baldwin vertical and they’re like, ‘But I’m a grad student! Come on!’ Oberlin [puts] a lot of effort into keeping the pianos here in nice shape. I mean, they have the funding here to do it, and they think it’s important. And that’s why the guys here want to work here and stay: because they support our efforts.”

The Conservatory has had a close partnership with renowned piano manufacturer Steinway & Sons since 1877, and the company has designated Oberlin Conservatory as the very first “All-Steinway School.” For Cavanaugh, however, Steinway’s relationship with Oberlin is more significant than its title.

“The ‘All-Steinway School’ moniker, or whatever you want to call it, is very recent. It’s a marketing thing. As far as we’re concerned, we were an all-Steinway school before the name ever came into being. The school decides, ‘OK, we’re going to buy the nicest pianos, and Steinway, we feel, makes the nicest all-around piano for [the school]. It’s not necessarily the best there is — I think it is, but it’s very personal — and they’re built like tanks and you can rebuild them.”

Oberlin maintains a close partnership with the company today, as evidenced by Steinway’s participation in the Conservatory’s development of a new Artist Diploma Program in Piano Technology, which starts next year. Oberlin plans to hold regional auditions in various Steinway factories, galleries and offices around the world, including in Shanghai, New York, Hamburg and Brazil; Steinway will vet the applicants before passing the names of top candidates along to the Conservatory.

Cavanaugh says they plan to accept only three students a year into this twoyear graduate-level program, which Cavanaugh and Robert Murphy, the assistant director of piano technology and curator of fortepianos, have designed to emphasize a collaborative relationship between technician and musician — a connection which both believe to be crucial.

“We’re going to be putting students in situations with artists … [where] the pianist will say ‘I need this done,’ and then the mentor will be there with the student, and the student will have an hour to get the piano ready,” Cavanaugh says. “So, baptism by fire. We force them to think on their feet and then we review their work … so that they learn to … get to the heart of what the pianist wants. They have to learn what the pianist is getting at, because the pianist, they’re not thinking in terms of [the same] language [as the technician], and most technicians don’t know what in the world the pianist is talking about.”

In the past, Cavanaugh has offered piano technician classes to undergraduates, in large part to educate Piano Performance majors about the mechanics of the instrument they spend so many hours playing.

“Most pianists don’t know a thing about their instrument. It seems like even harpsichord players can tune their own harpsichords, organists can very often take care of a cipher or do something, [but] a pianist sees the keys and they don’t know what is inside the piano.”

Students in Cavanaugh’s introductory class learned how a piano is tuned and tried their hands at making basic adjustments. In the intermediate class, students rebuilt an entire piano, including fixing the soundboard, putting on new strings and rebuilding the damper action. According to Cavanaugh, the undergraduate classes will likely be offered again after the Artist Diploma Program gets underway.

“Probably in the fall, there’ll be at least something geared for piano majors that’s kind of like a piano technology appreciation course. The other [previously offered courses] were like, ‘Roll your sleeves up!’ and we were competing with other schools and … doing in two semesters what they do in two years at the other schools. We just wanted to burn [the other schools] and show them we could do it because the students are so quick to learn.”

Cavanaugh views piano technology as an art, not a craft. “You just have to have the time to practice working on the pianos,” he says. “You know how it’s supposed to be done, you know all the rules … but then you need to fall down lots of times, pick yourself up and keep trying. … Tune two or three thousand pianos as a student, and then maybe you’ll be a good tuner. It just takes forever. … You just have to keep working on it until you’re competent and then, after you’re competent, you’re successful. After you’re successful you start really making your mark.”

While he says he sometimes gets caught up in scrutinizing the tone and evenness of a piano he has adjusted during a performance, he considers being a piano technician a rewarding position.

“If the person who is playing is just a great player, then I really enjoy the music, and I’m really grateful that I could be part of it, and it’s kind of almost spiritual,” he says. “You’re just in there and you’re going, ‘Wow, I’m really lucky to be listening to this great person and I talked to him and I helped him make the piano nice.’”