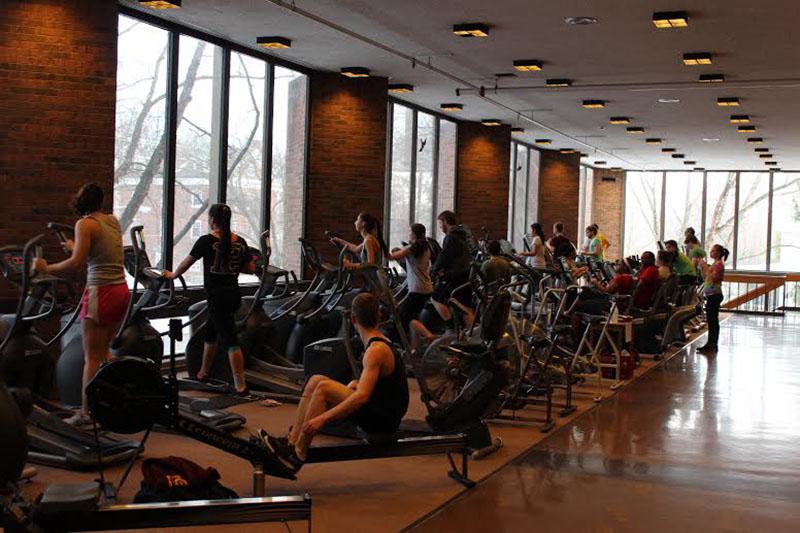 Students and community members utilize the equipment on the second floor of Philips gym. The new gym, which is located in the basement of South Hall, will open this Saturday.

South Campus’s new 24-hour fitness center located in the basement of South Hall is scheduled to open this Saturday. Administrators and students say they are optimistic that the new athletic facility will increase access to health and wellness resources.

“You’ll be able to look out onto the bowl as you work out,” said Dean of Students Eric Estes. “It’s going to be fantastic. It’s going to be a large space. There will be a matted space where you can hold yoga and Pilates classes and other fitness courses. There’s going to be a bunch of cardio equipment. We are putting in six treadmills, six ellipticals and six stationary exercise bikes. We are also putting in a sort of universal weight machine. And that is kind of where we are going to start and see how that works for people in terms of demand and usage.”

A joint effort between the Student Athletic Committee and Oberlin Athletic Director Natalie Winkelfoos, the new facility was designed in an effort to unite the campus and increase the accessibility of athletic resources available to students, according to Estes.

The Board of Trustees partially funded the project.

Estes noted that the students were instrumental in the project’s planning and execution.

“These conversations have been going on for a while, but I think that they were largely student-initiated. I think that students are best at identifying what kind of resources they need and what would work best for them, and so I think that’s part of what’s going to make the fitness center a success,” Estes said. “We could build something, and if no one uses it it’s been sort of a waste of effort. I’m confident that this is going to be successful because it is students themselves who have identified this as a priority.”

However, others fear the fitness center will not have the intended effects of alleviating the North-South campus polarization. College first-year and football player Sam Martin worries that the fitness center on South Campus would only increase the campus divide.

“I’m afraid that people who live South won’t have any reason to come up here anymore. I guess the weight room will be less crowded come four o’clock,” Martin said. Lillian Jahan, women’s basketball team captain and College senior, has similarly wondered about how North-South Campus interactions will affect athletes and non-athletes alike.

“Athletes will still come up here, because this is where our locker rooms are,” Jahan said. “But as far as non-athletes who live on South Campus, yeah, probably they will stay on South Campus.”