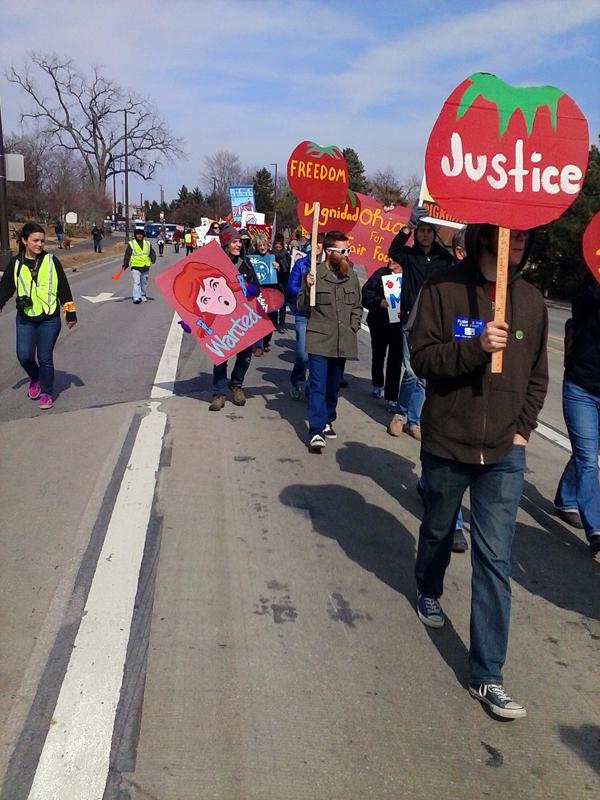 Oberlin students and local residents march for farmworker justice. Outside of a local Wendy’s restaurant, protesters promoted the food chain’s signing of the Coalition of Immokalee Workers’ Fair Food Agreement.

Oberlin students picketed a Wendy’s in Columbus, OH this past Sunday, joining a Florida worker’s union in a march for farmworker justice.

Protesters attempted to pressure Wendy’s into signing Coalition of Immokalee Workers’ Fair Food Agreement, legislation that both guarantees farmers a penny per bushel and ensures that there is a flat top on tomato buckets that are distributed.

According to College junior Zachery Crowell, this piece of legislation certifies that farmworkers are not over-picking or underpaid.

According to Western Farm Press, the majority of each year’s tomato harvest is shipped to fast food chains. In the past, the economic exploitation and inhospitable working conditions of farmworkers have gone unnoticed by the public. Although the majority of farmers have lived in poverty for the past several decades, it wasn’t until the late ’90s that this issue sparked national attention.

“Of how clear-cut it was, you can very tangibly see the benefit of working on the cause. It’s part of a larger movement to build worker power and have more workplace solidarity,” Crowell said.

College senior Jesse Vogel forged the relationship between the coalition and the campus as  part of the Student-Farmworker Alliance in 2009. The coalition was founded to fight for better working conditions for farmers, specifically those involved in tomato picking.

The march in Columbus was one of the first events for which Oberlin students were specifically asked to participate. Through its grassroots organizing, CIW has been able to attract Oberlin students to its cause.

“I think it’s really important because it was started by the people who are most affected,” said College senior Maggie Heraty. “These are all farm workers who did their own grassroots organizing; they have asked for support from many college students, and I thought that call to action was really incredible.”

The march in Columbus was one of the movement’s most successful efforts. Several major corporations signed onto the CIW Fair Food Agreement, joining the ranks of McDonald’s, Taco Bell and even Wal-Mart.

As the movement gains traction, Heraty hopes that other students from Oberlin will get involved.

“I think it would be awesome for more Oberlin students to get involved in this movement and support the work the CIW is doing,” Heraty said. “It was only two students and three Oberlin grads at the march in Columbus. Specifically, because this work is being done by the affected communities, I think it would be great for more students to get involved to support them. I also hope this movement extends to other farm workers around the country.”