In the Locker Room With Jeff Schweighoffer, Danny Baldocchi and Mitch Novak 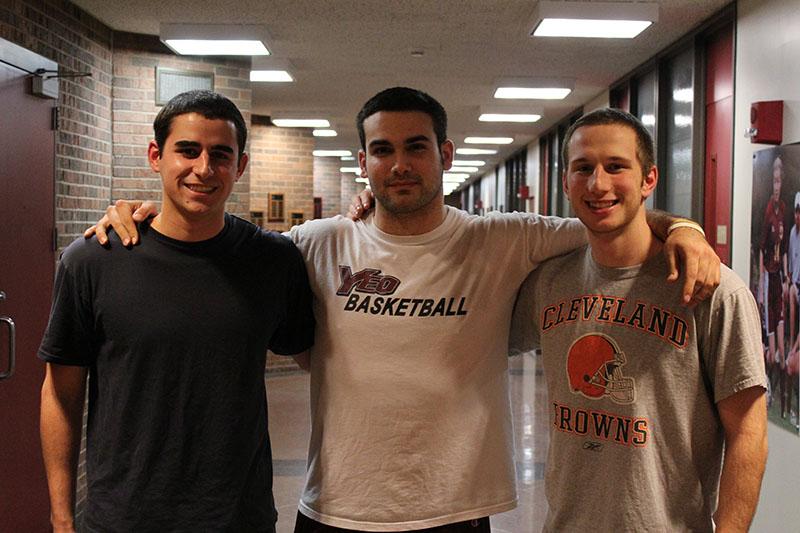 Nate Levinson, Sports Editor
This week the Review sat down with junior baseball players Danny Baldocchi, Mitch Novak and Jeff Schweighoffer to discuss how the poor Ohio weather has affected the team’s preparation, their favor­ite Oberlin sports teams and their World Series picks.

What are some of the team’s goals for this season?

Jeff Schweighoffer: Everyone’s goal would ideally be a conference championship. We’re also looking for something around a 25-win season, hopefully more. We want to improve upon last year.

Danny Baldocchi: I think everything is contingent on improving our pitching staff. It’s a tough season with so many doubleheaders, so 25-win seasons and conference championships will come when we have pitching that can back up our hitting, which is already the best part of our team. Whatever we accomplished last year is nothing. We all say it: We have nothing in our trophy case.

What personal goals do you have?

DB: I could hit 12 home runs, but if we don’t win any conference games, it’s not going to matter. No one is going to care.

JS: Personally I would like to improve upon my defense and hit more batting practice home runs than Baldocchi.

DB: I’m going to throw this out there. I’m looking to break the [Oberlin] home run record. It’s seven, and I had four last year, and I played less than half the games, so I’m definitely trying to get that. Also, no chance I lose the batting practice home run contest.

How tough has it been to move on from the season-ending playoff loss last season?

JS: It was a tough way to go out, but I think that’s really something to build on. Everyone is upset about how we lost and looking to get back at it this year. It’s motivat­ing us a little bit.

DB: I was mad because I hurt myself in the first game of the play­offs and was pretty much useless from that point on, but I kept playing. I went 0-for-seven after I tore all the ligaments in my thumb. I had a bunch of chances to knock people in and couldn’t do it.

How difficult has the weather made it to get ready for this season?

MN: It’s tough because you can practice inside all you want and work on individual stuff, but it doesn’t compare to actually being on the field and getting the real feel for what you actually have to do. It’s hard to keep focus, too.

DB: Distances get completely messed up. As soon as we go outside, all the throws are harder. All the things we thought were home runs are caught at the wall.

JS: The hardest part is mental. It’s hard being inside because it’s just not as much fun.

How does this year’s team com­pare to past years’?

DB: We’re definitely better. We have much more vocal leaders this year.

What’s your favorite Ober­lin sports team other than your own?

DB: I want to love the basketball team, but they make it hard. I love basketball, and we’re always going to be out there cheering them on. It’s frustrating seeing them frustrated by not winning.

What are the best and worst parts about being on the baseball team?

DB: When we have games or practice, we’re out there for so much longer than other sports. We’ll have a doubleheader on a Saturday and be at the field for, like, 12 hours. Worst part is that it’s just a huge time commitment.

JS: Best part is that you get 40 great friends right off the bat. We hang out all the time. Worst part: While baseball doesn’t really seem like a physically demanding sport, playing four games a weekend can really be a grind. Our schedule gets kind of compact because of the weather. Also, the arm pain is a bad part.

MN: I can vouch for the arm pain. It’s not good.

Do you have a big rival that you get especially pumped up to play?

DB: I hate [The College of] Wooster. Wooster has been perceived as the best team, and they have that cocky attitude.

JS: I don’t like Kenyon [College], and I want to beat Wooster more than anyone.

What MLB players have you tried to model your game after?

Who’s going to win the World Series this year?

DB: A’s for sure. They’re going to go 162–0, clean sweep through the playoffs, lose one World Series game and then take the rest of them.

MN: I’ll go with the Tribe.

JS: I think the Red Sox are going to repeat.