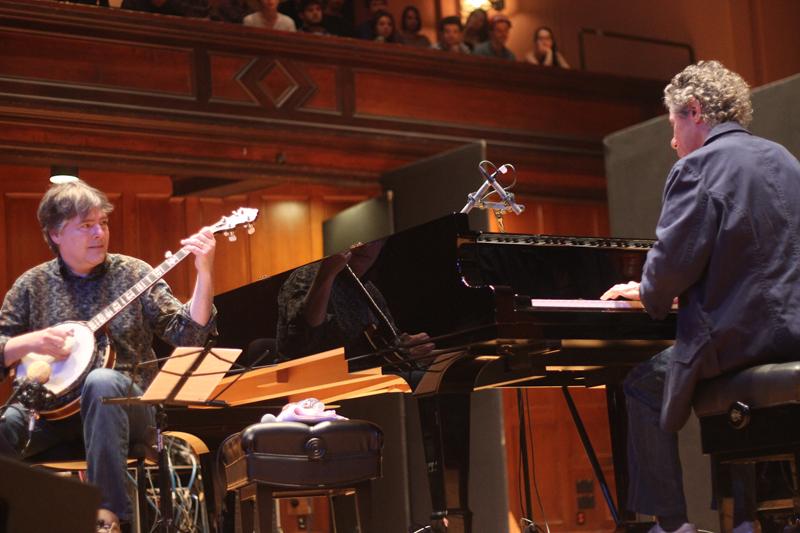 Béla Fleck (left) and Chick Corea blended their unique instruments in a mesmerizing performance last Wednesday in Finney Chapel. It is the first time the duo has gone on tour since their Grammy-winning album release in 2007.

Two brilliant and virtuosic musicians reunited at Finney Chapel on Wednesday in one of the most unique duos in music. Chick Corea and Béla Fleck are together again for their first joint tour since the release of their Latin Grammy award-winning album The Enchantment in 2007. The duo has a combined total of 33 Grammys, but even this staggering number does not effectively communicate the extent of the pair’s chemistry, which bubbled across the stage and into every corner of the Chapel last Wednesday.

Corea has had a penchant for innovation and risk-taking since the beginning of his career. He was instrumental in the creation of fusion jazz in the ’70s, founded the lauded band Return to Forever and was an integral member of Miles Davis’s band. He is equally comfortable in any number of genres, including jazz, classical, flamenco and Latin. Simultaneously, Béla Fleck is one of the most skilled and inventive banjoists today. Founder of Béla Fleck and the Flecktones, Fleck is a force to be reckoned with.

Finney Chapel was filled to capacity, with even the balcony packed, and the audience waited expectantly for what turned out to be a display of musical virtuosity at the upper limit of human ability. To start off the almost three-hour show, songs “Señorita,” “Menagerie” and “Waltz for Abby” stunned the crowd with their musical excellence. The pair had the attitude of two cheerful uncles having a playful jam session, and as such their show showcased a range of pieces: some from their album The Enchantment, some that anecdotally introduced pieces they had taught each other, a Stevie Wonder cover, and even a song Fleck wrote for his newborn son Juno. The piece for his son was jaunty and warm, supposedly modeled after all the ways the syllables of “Juno” could exist.

When Fleck and Corea came together, the powerful players did not clash, but instead created a beautiful and supportive harmony. Fleck and Corea’s synchronicity — both physically and mentally — was astounding. It sounded as if one foreign instrument was being played by one person with four hands, not a banjo and piano player delicately playing off each other to make a unified sound. Corea and Fleck have a unique aptitude for communicating moods, times and places through their music, exemplified by “Spectacle,” the last official piece before a lengthy encore. This piece allowed both musicians to showcase the styles that traditionally correspond with their instruments, such as that characteristic bluesy-country twang commonly associated with the banjo, and a throwback to upbeat traversals up and down the keys of the piano. The ensuing standing ovation was elated and appreciative, and, when the air cleared, the duo immediately came back out for a laid-back encore, just when the crowd thought they could breathe.

This kind of performance was truly once in a lifetime because, although the songs played were well-rehearsed, Corea and Fleck improvised as they saw fit to make their performances fluid as they played off each other and the energy of the audience. The stunning duo of Béla Fleck and Chick Corea will leave its audience haunted for days.