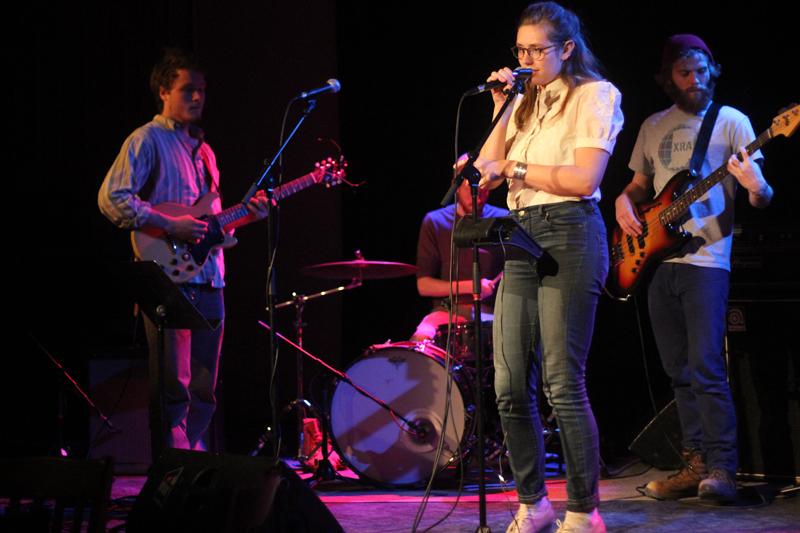 From left: Charles Lee Garden on guitar, Andy Beargie on drums, Abigail Miller and Glenn Myers on bass constitute the band Heather French Henry, who performed psychedelic rock to a disoriented audience at  the Cat and the Cream on March 31.

Subverted expectations are familiar to everyone, be it a “date” that was actually just “hanging out” or a book with a bad cover but a great ending. The Heather French Henry concert at the Cat in the Cream on March 31 followed this pattern, leading the audience to expect mellow folk, but delivering psychedelic art rock instead. While the bait and switch was disorienting at first, the show was engaging enough to overcome such a handicap and deliver a strange but captivating night.

Opener Caitlin Marie Bell, OC ’10, was the folky singersongwriter and guitarist that everyone was expecting the headliner to be. Her sweet, classically-trained voice echoed like a sandpaper-smoothed Brandi Carlile as she played a couple of original songs inspired, according to Bell, by her home at the base of the Appalachian Mountains. Picturing Bell’s bluesy folk music at the foot of a huge mountain range captured only half the poetic power she was able to communicate live.

Her other songs were pulled from the same geographic region, just a couple hundred years prior. Bell introduced each piece with a mini history lesson. One song, she said, was a poem written by John Jacob Niles inspired by a ditch digger’s words — “Go ‘way from my window, go ‘way from my door.” Niles stole the lines to write a short poem about an unrequited love, which Bell in turn borrowed to set to music and, consequently, used to steal the show.

Bell was representative of the way expectation is often not a trap, but instead something of a diving board. Standing small with her guitar in the middle of the Cat stage, wearing all black and introducing each piece with her highpitched voice, her powerful performance met with the audience’s exceptional disbelief. The audience expected folk, and Bell delivered — but with more talent than could have been anticipated. Following her set, the audience was more than primed for a solid folk follow-up from the headliner.

Enter Heather French Henry. Heather French Henry is not a guitarist of a folk singer/songwriter. They’re a band, and an experimental one at that: two guitars, bass, drums and an Oberlin-trained opera singer, Abigail Miller — also OC ’10. It was her operatic vocal movements that produced a psychedelic art rock sound, simultaneously the band’s downfall and saving grace. With a name like Heather French Henry, an opening act like Caitlin Marie Bell and the folk-friendly Cat in the Cream setting, the audience was naturally ready for something far different from what they received. Not only did Heather French Henry play funky, unusual music and follow a folk musician, but the show also had to compete with that folk musician’s exceptional talent. Bell set the stage with forks and knives; Heather French Henry was prepared to serve soup.

To make matters worse, it took far too long for the band to figure out some staging issues — the bass was too loud, and there was a lot of unnecessary feedback overall. After only a few songs, the already-small audience had reduced to half its original size and had slowly trickled to a mere third by the end of the night. By the time Heather French Henry finally hit their stride, only about six people remained in the Cat. Those who remained, though, were treated to a journey into genreless territory. The band established a sound without being shackled to musical tropes or patterns. The odd vocal line for singer Miller that danced between lyrics and wordless tones — paired with its electronic funk distortion and delayed operatic trill — clawed a new path somewhere between psychedelic rock, jazz and hypnotic folk. In a crowded basement or a sweaty, late-night ’Sco, Heather French Henry would probably have fared much better.   Taking each performance as a separate entity — Caitlin Marie Bell as a moving folk musician and Heather French Henry as an experimental music experience — is really the way to see the concert without feeling the need to compare one sound to the other. Taken this way, both were innovative and definitely worth a listen — but attendees had to check their expectations at the door.