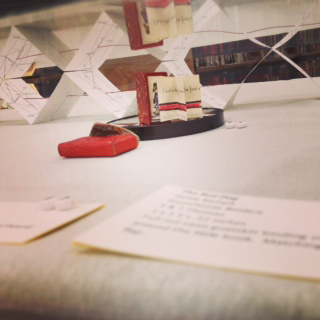 The Art Library is hosting the <3” (three inches or less) handcrafted miniature books exhibit until May 31. The exhibit preserves and promotes the craft of bookbinding and book art.

A visitor to the Clarence Ward Art Library will be intrigued by colorful signs and a table of free prizes like miniature magnifying glasses and fortuneteller fish, but, if one visits before May 31, attention might instead alight on an exciting, albeit tiny, new exhibit on display. The exhibit, titled <3” (three inches or less) handcrafted miniature books, features four display cases full of skillfully crafted miniature books, each less than three inches long.

Each book is a true work of art — or rather, each book is an “artists’ book.” The term, which originated in the 1970s, refers to a piece of art that takes the form of a book. While the art form has existed for centuries, it gained widespread popularity in the second half of the 20th century. Each of the miniature artists’ books included in the Art Library’s exhibit was handcrafted by an artist from the Delaware Valley Chapter of the Guild of Book Workers, one of 10 chapters in the United States. The guild was founded in 1906 to, according to the organization’s website, “establish and maintain a feeling of kinship and mutual interest among workers in the several hand book crafts.” Today, the organization exists primarily to preserve and promote the craft of bookbinding and other book arts, and benefits from the involvement of many well-known bookbinders.

This is not the first time Oberlin has literally made a display of its appreciation for the book arts. In fact, the art form is near and dear to the Oberlin Art department. In addition to its vast body of research material, the Art Library boasts a collection of 1,000 artists’ books for perusal. Many of these books come from Ruth Hughes, OC ’85, who donated 100 artists’ books to the Oberlin College Library in 2010. The donation was briefly shown in a Philadelphia exhibition before returning to Oberlin, where it can still be accessed at the Art Library.

Two years later, Hughes and book artist Alice Austin, both of whom curated the 2010 show, curated another show, this one run by the Delaware Valley Chapter of the Guild of Book Artists. During this exhibition, Art Librarian Barbara Prior selected one artists’ book as the purchase prize, the exhibition favorite selected to be purchased by the College. The book, titled “Peace Crane,” was constructed out of paper cranes by Japanese-American artist Eriko Takahashi in honor of Japan’s massive 2011 tsunami.

The display is a hidden gem on campus; the books are exquisite. For some books, the appeal is in the details: the delicately designed and bound covers that must be viewed in tiny magnifying mirrors, the incredibly intricate patterns used to form the shapes of the book, or even the size. The smallest book in the show had dimensions of less than one inch. Some books are quirky and cutesy like Valeria Kremser’s “Matryoshka Book,” which is made from paper covered nesting book boxes resembling a Russian doll. Another quirky highlight is “One Month of Monsters,” which contains a folded stream of colorful monster designs and a monster-esque cover made of felt, adorned with foam and googly eyes. “Inherent Vice” seems to tell a full story in two 2.25” by 2.25” yellowed and stained pages adorned with a short nursery rhyme: “Jenny she got well / And stood up on her feet / And told Robin plainly / She loved him not a bit.”

The ability of something so seemingly simple and small to reveal so much detail is a reflection upon the nature of the book paper arts. The miniature books exhibit is refreshing in a world that has become increasingly fascinated with all things digital. Paper art is receiving more appreciation than it has in years, simply because it is now unusual. This sort of art appears to belong to a previous age, and so it seems fascinating. Various groups at Oberlin certainly believe this to be true, having held exhibitions like the Mail Art display that the Exhibition Initiative sponsored two years ago with help from The Plum Creek Review. They have also hosted visitors like Fulbright scholar Aimee Lee, OC ’99, who is an expert on Hanji, the art of traditional Korean papermaking, and taught a Winter Term course on papermaking and book art. The Oberlin Art Library has connections with 1,900 artist alumni and strives to makes its 2,500 objects as accessible as possible, especially to students on campus. The miniature books exhibit is a quirky, captivating exhibit all on its own, but it is more than just an exhibit — it is another way in which paper arts are making strides at Oberlin.