In The Locker Room with Erin Johnson, Brenna Sheldon and Grace Porter 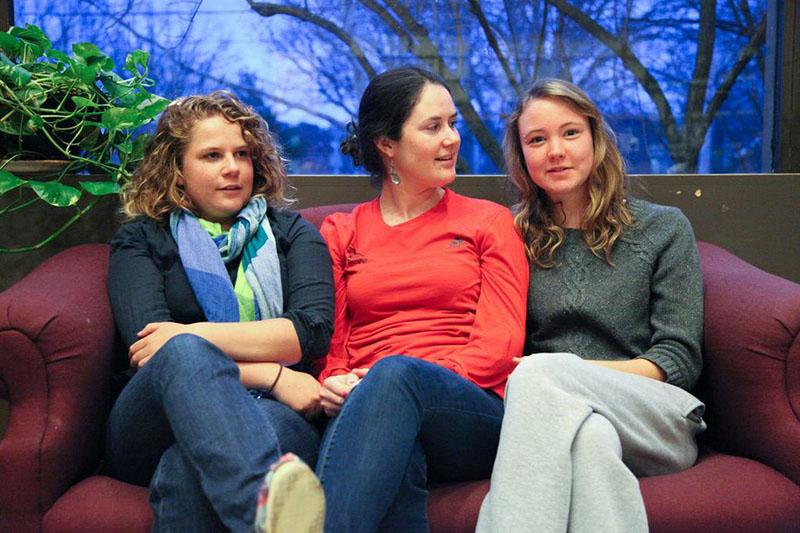 This week the Review sat down with women’s tennis players senior Brenna Sheldon, junior Grace Porter and sophomore Erin Johnson to discuss their recent spring break trip, past seasons’ success and what drew them to Oberlin.

What are your thoughts on the season thus far?

Brenna Sheldon: I think our season has been pretty good so far. We have had our ups and our downs; spring break was really tough. We played top teams in the nation, and that was good for us, apparently, but really hard. Given that we are such a young team, it’s going to help. Everyone is coming back but me next year.

Erin Johnson: It was mentally and physically exhausting. I think the tough matches we had over spring break are going to help us, especially come conference because we play tough teams. We’re growing.

Grace Porter: Day after day we just kept going at it. But the season so far is good; we have three fres men who are adding a lot to our lineup and contributing a lot.

How was the spring break trip?

BS: We learned some soccer. It was kind of like nine sisters living in a house. The men’s coach made the guys clean up their house and keep it kind of neat, but our coach didn’t really care, so we spread out and had fun all break.

GP: We went to hibachi and had a lot of challah.

The last two-plus years have been incredibly successful for your team. What do you think has contributed to that?

GP: I guess two years ago we had an older team — I was the youngest on the team — they all knew their stuff and were really disciplined and knew how to compete well, but they have all slowly graduated. Now, we’re learning how to compete again.

BS: We were good because we had five seniors. We had a really deep lineup—fromNo.1toNo.6— everyone was good. No. 6 could play a match with No. 1 and have a pretty good match. Now we’re definitely rebuilding.

Do you prefer playing singles or doubles?

GP: I’ve started to like singles more than I have in the past; but I think doubles is a lot of fun, and I prefer doubles. Brenna’s our singles specialist; we look up to her.

BS: Grace is one of the best at doubles in the country. She’s definitely one of the best doubles players we’ve had at Oberlin ever. I used to only play singles before coming into college, and now I’ve learned a lot about doubles, and I love it and I’m getting better, and I get to play with both Erin and Grace.

EJ: I never played doubles before I came to Oberlin, so doubles is a whole new thing for me, but I actually like doubles more this year than singles. It is more fun for me. I feel like I can focus better because someone else is relying on me and I am relying on someone else, and in singles I am out there all alone.

Brenna, you just won your 100th match with Oberlin. How does that feel?

BS: It’s a lot of matches. I had no idea that I had played that many matches, so when I heard that, I was like, ‘Wow, that’s really cool.’ It’s a lot of tennis matches. It’s fun, I can’t believe it. It’s gone so fast.

How has your game improved since you got to Oberlin?

EJ: I still consider myself growing because I am a sophomore. My mental toughness coming in definitely was not good. I did not have much match experience in high school, so this is a different experience entirely. I am becoming more mentally tough, but it’s a work in progress.

BS: I guess I came in having played a lot of tournaments, but I was never on a team in high school. I didn’t really play doubles. I was totally a singles player, and I loved it. I played a lot of matches, but I had no team. I would much rather win as a team than win individually. It is so much more fun to be a good team. And I’ve got ten better at tennis, too — more aggressive.

GP: I guess my tennis has changed in that I am more disciplined now. I think when I came here I mainly focused on going out there and trying to look cool and win in only one way, but now I think I have more variety, which helps.

What drew you to the tennis program here?

BS: Coach Constantine [Ananiadis] drew me here, or it might have been Ariel Lewis [OC ’12], who I think is the best player in school history. We played together a little bit in high school and played tournaments together, and she came to Oberlin, and she was a year ahead of me. I think she told my coach about me, and that’s why I am here. I loved Oberlin; I loved the music.

EJ: I applied to nine schools all very similar to Oberlin. I think Coach C. and my visit here really is what drew me here. I think Coach is really great, and I have a really good relationship with him that I did not really feel with any of the other coaches, and I also stayed with Preeya Shah [OC ’13], who graduated last year, and she was really cool and put away all my fears about Oberlin.

GP: I didn’t come to Oberlin specifically to play tennis, but I’m glad that I am. It’s been a really convenient and privileged way to keep up tennis and not have to hang up the racket right after high school.

Do you prefer playing outside or inside? Grass or clay?

BS: Outside all the way, 100 percent. I like playing in sunshine, and I like wind. It’s not the same game indoors at all.

GP: Both are good.

If you could be great at one other sport, what would it be?

EJ: Probably running and soccer. I wish I was more of a team-sport person.

GP: Maybe Frisbee. You can make a lot of friends with Frisbee, but I can’t throw a Frisbee.

Do you have any team traditions or superstitions?

EJ: We have our little huddle that we started this year.

GP: We like to cheer really loudly for Chicago, regardless of if the University of Chicago is present.