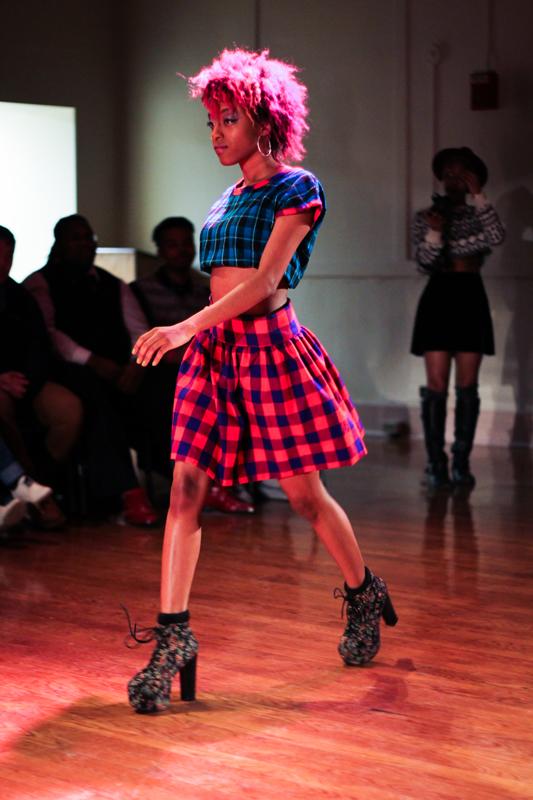 College first-year Mee-Ae Chatman-Nelson models a piece from sophomore Sophie Umazi Mvurya’s fashion collection in the sold-out show Runway Through Africa. The event raised over $750 for the Yakubu Saaka Scholarship Fund, which aims to fully cover the tuition of an African student.

Who says that fashion is always vain? Models sporting College sophomore Sophie Umazi Mvurya’s fashion collection, titled “Umazi,” strutted down the catwalk last Friday and Saturday at Runway Through Africa; between the two sold-out shows, the event raised $757 for the Yakubu Saaka Scholarship Fund, which aims to fully cover the Oberlin College tuition of an African student. The show, sponsored by the African Student Association, Abusua and Students of Caribbean Ancestry, also succeeded artistically, transforming Wilder Main into a stylish space with an ambience worthy of a cosmopolitan fashion week.

Mvurya, originally from Kenya, gleaned considerable inspiration from the textiles, colors and patterns of her home country, but she also derived influences from all over the continent: Moroccan silks from the North, Maasai fabric from East Africa, Kente cloth from West and Central Africa. The Maasai fabric provided the link of the collection. When not used as the base material of a garment, it at least provided an accent, while Kenyan collars, pockets and pant cuffs kept the assemblage grounded in Kenyan tradition.

The show’s first set, titled “Be Classy,” presented a mixture of Maasai fabrics and Moroccan silks that could transition gracefully from a cocktail party to a BBQ. The men wore printed green shorts or pants with either a blazer or button-up shirt, while the female models were clad in blues, greens and peaches and rocked short skirts with collared tops. Every model had remarkable swagger, but the women were perhaps even more impressive for tearing up the runway in sky-high heels.

Models’ personal styling ranged quite a bit, allowing some individual flair to spice up Mvurya’s designs. One model’s pink half-shaved hairdo matched her skirt perfectly, while another’s black lipstick and asymmetrical top bun added an edgy vibe. In addition to these funky hairstyles, each model sported colored dots on the forehead, nose and cheeks. Jewelry, commissioned by College senior Koryn Locket, was just as bold as the garments on display. One particularly striking piece was cloaked in fabric hung thick around the model’s neck and tapered to a pendant with three hanging embellishments.

While models changed between collections, various performers took to the catwalk to keep things moving. The first of these was rapper Van ’Go, the stage name of Gynarva Van Monroe, OC ’13. Monroe had the audience clapping along 30 seconds into his set. Rapping all original material, he unveiled a new piece, a remake of Iggy Azalea’s “Work.”

“Be Simple,” the second set, celebrated the beginning of spring with bright, flowing dresses, flower-print shorts and well-cut vests. This time, the majority of the fabric was Kente, but it was accentuated with contrasting Maasai colors and prints.

After the models’ second walk, the Umoja Steppers, Oberlin’s step dance team, performed. In perfect synchronization, they pounded the catwalk in heavy black boots before clearing the runway in time for the third run, “Be Funky.” In this playful collection, models exchanged their avant-garde heels for tennis shoes and sported midriffs with a mixture of printed bottoms or vest tops; one particularly stunning ensemble featured a black, faux-leather peplum top with printed bottoms. The models were greeted with cheers and raucous applause from the audience; the only people in Wilder Main not grinning were the appropriately steely-faced models themselves.

Mvurya and a troupe of other dance-savvy students supplied the last between-runs performance, their African-inspired moves supplemented by Van ’Go’s return to the catwalk.

The show’s final set was also Mvurya’s self-proclaimed favorite. “Be Fierce” left no doubt about her talent as a designer or seamstress. Meticulously crafted jackets forged an unexpected multicultural aesthetic, and the multicolored printed blazers offered a new take on a popular garment.

At the end of the fashion show, Mvurya followed her models onto the catwalk to thank the audience and finish in African tradition — with dancing. She was asking her viewers to embody the show’s theme, “Be You,” just as she had done in her clothing line. There are times to be classy, simple, funky and fierce, and Mvurya’s collection showcased them all.