In the Locker Room With Sophia Brancazio, Molly Martorella and Lauren Taylor 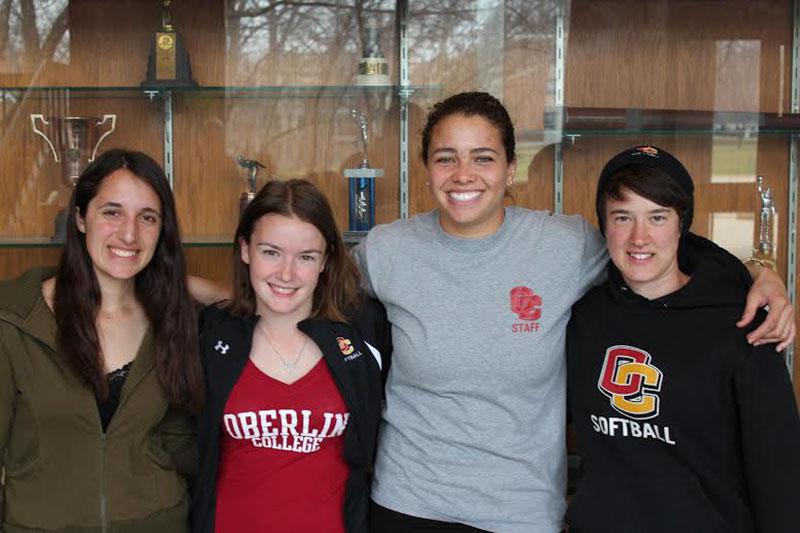 How is the season going so far?

Sophia Brancazio: The team’s been great, especially with a lot of new people.

Molly Martorella: The boys’ distance team is fucking killing it.

Lauren Taylor: I think on the women’s side, we had a lot of injuries, and a lot of people graduated last year that were really strong on the sprinters. A lot of upperclassmen have been injured, which is just really unfortunate.

Lauren and Molly, you recently ran times in the 10K that rank within the top seven in the nation; how did that feel?

LT: Last year was the first year we went to Bucknell University [Bison Outdoor Classic], which is the race that we ran the 10K in, and it was just a really fun experience. You run at night and it’s under the lights; it’s a great opportunity to run well, and I think we all just took advantage of it. Sarah Jane [Kerwin] is the other one who is right up there with us, which is really awesome.

MM: It will be really fun having a lot of people at Nationals.

LT: I think it’s just really something new to have this many people potentially qualify for it. It will make the experience a lot better just to have people to run with and warm up with and spend the weekend with. It really makes a difference from just going with the coaches alone.

MM: This could be the most people that qualify for Nationals in outdoor track.

The team has set a lot of NCAC records this year;do you expect the trend to continue?

MM: Oh yeah, I expect that to continue.

SB: Tiffany [Henry] has not really competed in outdoor yet, because she has been busy with a lot of other commitments, but once she gets back into it she’s going to do well. In indoor conference she broke the record like five times.

LT: Throwers are just so impressive, especially in their consistency. It’s really neat to watch them train, because they all have individual times where they meet with the coach, and I think that their mindset is just awesome. They approach each opportunity really competitively.

SB: And even those people that aren’t breaking a lot of records, they are still constantly improving by a lot — by several feet a week.

LT: I secretly want to be a thrower.

SB: I want to learn how to throw javelin.

What is your favorite event to compete in?

LT: The 10K is the best. When you have a good 10K you just feel the most happy you have ever felt.

MM: I like the 5K personally. If you go out hard, you can survive the middle.

SB: Well, I like the 200 because it’s not like the 100 [meter dash], where if you have a really bad start it ruins your whole race. It lets you get up to your top speed without getting extremely tired, and you come around the curve and feel so fast.

You have all dealt with season–ending injuries in your Oberlin career. How have you rebounded from them?

SB: Usually I get injured near the end of the season, so I just have to power through it, but this year I got hurt in the fall, and then Winter Term, and then spring break.

MM: I think a lot of it is [that] our team is so good about reaching out, and so even if you are missing a lot of time at practice or runs, they are really good about being supportive. The team has helped me stick through it.

LT: When you’re injured during cross country you have a lot riding on the season, so you need to focus on the end goal, not the day-to-day. The team talks about larger goals, and you’re not so focused on running this weekend, but running in two months, which really helps. I think the coaches, especially [Assistant Coach] Dani [Hunt], have been really focused on injuries and have worked with us to make sure we have the seasons we want to have. There is a really fine line between training as hard as you can and getting injured.

What has been the highlight of your track and field career at Oberlin?

SB: For me it was the North Central [Gregory Invitational] meet last year. I had never been to such a big meet. On the sprints end, we don’t really get people to these big meets and to Nationals, so for me it was my first really big meet. Everything before the race that could go wrong did go wrong, but we still ran a really amazing race. That was my most successful race.

LT: I would say Bucknell last year. It was my first 10K I had ever raced, along with Sarah Jane and Kyle [Neal]. It was the first opportunity where we ran, and we ran a minute faster than our projected time, and it was just a really fun race. It was the first time a lot of us realized we could be really good at the 10K. It was one of the moments where when you finish the race, it felt like you could run another 10K immediately because it was just so fun.

MM: I think that my sophomore year conference performances were good. I took on a lot and I competed really well on those days, both indoor and outdoor.

Where are your favorite places to run on campus?

SB: I like the outdoor track. Actually, I know a lot of sprinters hate this, but I enjoy running Mt. Oberlin. I like running hills.

MM: There is always a run that I do every day for a year. I’ve been doing power hour fake out. You go through the Arb and basically get onto the bike path and go south, and it ends up just being this dirty gravelly path for a while, and sometimes you can make it longer, or cut it shorter, or just do a turnaround. It’s pretty and shaded and has a soft surface.

LT: I just love Sunday long runs. Sarah Jane and I always find new places to run, since the runs get monotonous. We go out to Carlisle [Reservation] and get lost. It’s just really fun to find all the new places to go. It’s kind of like a challenge.

What do you do to prepare for a race?

SB: I have a routine, and if the routine gets messed up, then all hell breaks loose. I get extremely quiet and if anybody talks to me, I give them the death stare.

MM: Over the years, I have gotten less specific about what my regimen is. Typically, the night before, I will roll and stretch and not eat anything too risky. On the morning of race day, I really like to do a shake-out earlier on in the day.

LT: Senior year of high school, I had a very specific routine that I followed, and I would get so mad if it got disturbed. But being in college made my routine difficult to follow. The only thing I do now is paying attention closely to what I eat. I think shake-outs are really great before longer races, which is just two miles that you do the morning before a big race. I also have very specific socks that I wear. I have two pairs that are my racing socks.

What are your personal goals for the rest of the season?

SB: To run again. That sounds really sad, but it would be really nice if I could get to like 80 percent of where I was last year. It would make a huge difference for our 4×100 team. I want to be back by conference.

LT: I think I am just really looking forward to being able to get the chance to run a fast 5K. It’s really nice to have the buffer of being qualified for Nationals and not having to worry about qualifying the week before, like we did last year. I am really excited. It’s going to be really great, and it will be really great to have our conference meet at Oberlin.

MM: This year it has been hard for me to generate concrete goals, but my goal this year is to just be racing and enjoy it. I think I am still going to run fast, but don’t know what that is going to look like by the end of the year.