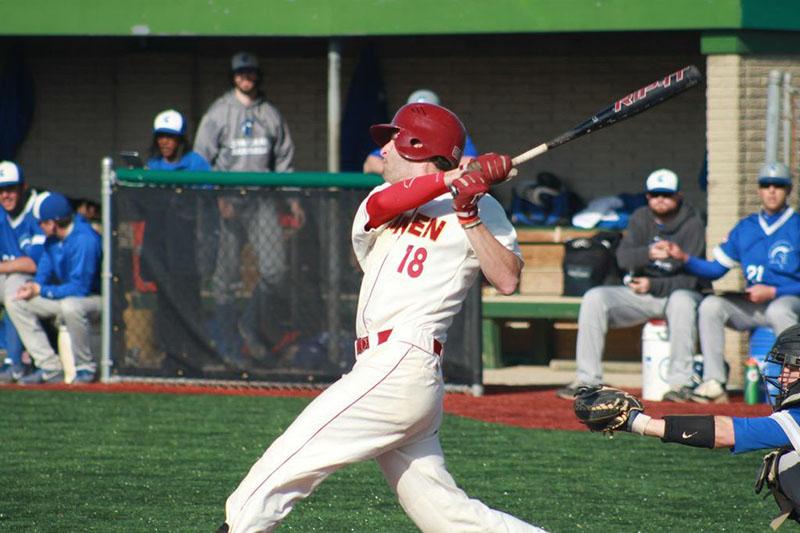 Junior Andrew Hutson connects with a pitch in a game against the Case Western Reserve University Spartans last Sunday. Hutson’s single in the first game of the doubleheader gave the Yeomen a 6–5 victory.

Last Sunday the Yeomen played the Case Western Reserve University Spartans in a doubleheader, winning the first game in walk-off fashion and losing the second in a blowout.

The Spartans are a nationally ranked team and first in their conference, so the Yeomen knew they were in for a challenging set of games.

“A lot of teams tend to psych themselves out before playing tougher opponents,” first-year Justin Cruz said. “The fact that we came out and didn’t let their good reputation affect how we played was huge.”

The Yeomen quickly fell behind 3–0 in the first game, but the Yeomen fought back to take a 4–3 lead in the eighth inning on a double by junior Mitch Novak. It looked as if his clutch hit would go to waste when senior Mike McDonald allowed two runs in the top of the ninth, but the Yeomen wouldn’t go down easily. After singles by junior Daniel Baldocchi, junior Ryan Bliss and senior Kevin Verne, junior Andrew Hutson drove in Bliss and Baldocchi to give the Yeomen a 6–5 walk-off victory.

“We played Case close the first time we faced them, so we were confident going into Sunday that we had a good chance to win both those games,” Hutson said. “To win a game like this takes execution on the part of everyone on the team, and we were able to capitalize on our chances at various points of the game. I was just the lucky sucker who came up at the end and got a chance to get a big hit.”

McDonald was ejected with two outs in the top of the ninth inning, which makes the team’s walk-off win all the more impressive

He took issue with an umpire who made a safe call at first base, extending the inning for the Spartans, and was promptly thrown out of the game.

“Our biggest challenge was the umpires,” junior Jeff Schweighoffer said. “They were unable to make routine calls at first base and, putting it nicely, they did a really bad job.”

Fortunately for the Yeomen, senior Mattie DeDoes stepped up to get the last out of the final frame, keeping the score at 5–4 and paving the way for Hutson’s heroics.

Despite the slight breakdown in the ninth inning of the first game, McDonald leads the Yeomen in ERA and opponents batting average.

The team fell 10–2 in the second game of the doubleheader, but Baldocchi was still pleased with the team’s performance.

“We would have liked to take both of the games, but winning even a single game against a highly ranked opponent like Case is always a positive outcome,” he said.

Despite the loss, the team showed up ready to win on Wednesday afternoon as they took on Baldwin Wallace University Yellow Jackets. The Yeomen easily defeated the visitors 7–4 in game one, but followed up with a much closer second game, winning 2–1.

The Yeomen’s current record is 17–17 and 7–9 in conference play, good for third in the NCAC East. They travel to face DePauw University this weekend in NCAC crossover play.