The Oberlin Review • May 2, 2014 • https://oberlinreview.org/5683/sports/in-the-locker-room-with-josh-urso-jimmy-taylor-and-jerry-choi/

In The Locker Room with Josh Urso, Jimmy Taylor and Jerry Choi 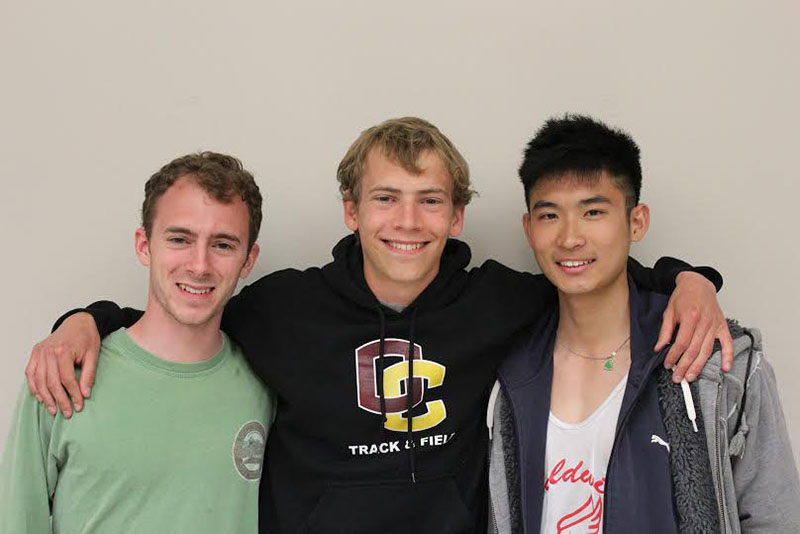 How is the season going so far?

Jimmy Taylor: It’s been going really well. We have had a lot of people making consistent progress throughout the season, which to me is a mark of how the season is going.

Jerry Choi: I am definitely seeing a lot of improvements — every week I see new personal records.

Josh Urso: To me, compared to last year, it seems like the team’s doing really well. So many school records have been broken this year; it’s kind of ridiculous; I am losing count. [Junior] Tiffany [Henry] has broken at least 15 school records, [sophomore] Geno [Arthur] and [junior] Carey [Lyons] have broken records, and so many people are going to Nationals.

Any highlights from the season?

JC: I finally broke the 54-second barrier in the 400-meter hurdles. That has been one of my biggest goals since coming into college. Also splitting under 50 seconds in the 4 by 400-meter relay.

JU: A highlight is improving a lot on last year and setting a personal record. A lifetime best in the 800 meters. The consistency and the higher level of performance has been a highlight for me.

JT: I guess for me, I feel like I have been a little disappointed with how my season has gone in terms of times. But I’ve been having a really good time and have been really competitive in my races, and just working out with younger guys and seeing them improve every week has been really awesome for me.

If you could compete in any event, what would it be?

JT: I feel like the classic ‘I wish I could do this’ answer is pole vault. Everyone is like ‘Oh, it would be so cool,’ but it would be so cool. I would also love to do the 100-meter dash. I don’t really have a good reason why — it just seems really fun to me.

JU: I have a hard time deciding between pole vaulting, javelin and probably the 400-meter dash. I do run the 400, but to be really good at it, that would be so cool.

What are your hopes for the rest of the season?

JC: My hopes would be that we see a lot of people go to Nationals. We already have a good amount of people, and I really want to see a lot of the guys get up there. It would be nice seeing more school records broken and seeing people PR in conference, which is this weekend.

JU: I want to see the trends continue, the trend of the season so far [of] everybody getting PRs. It seems like every week people just keep PRing. It should be exciting because at the end of the year everybody is tapering, everybody is feeling fresh, like they felt at the beginning of the season. Usually you will see some massive PRs at the end of the year when people are uninhibited by the workload. It will be pretty exciting.

JT: I think this year, more than any other year, we have a really balanced track team. We have people that are going to contribute and compete in all different events and especially because our team is so young, it will be really awesome to see if people can step up and compete with the best people in our conference.

Are you excited to host the Conference Championship meet this weekend?

JT: Having home meets is just the best. The last time we had conference at home was my freshman year. So it’s always a lot of fun, you have your friends, your professors come out and you get to do the thing you love for an audience.

JU: I am excited for it. I feel more comfortable at the home meets, mostly because all your friends are there — professors, peers. It’s helpful mentally [to be] racing where you work out because you think, ‘OK, I’ve done this, I can do this.’ It’s not as stressful [as] traveling and having to spend the night somewhere in a hotel and getting stiff on the bus.

How do you prepare in the minutes leading up to your event?

JC: Well I warm up like 30 minutes before I race. I have a routine — I don’t go too hard because I don’t want to tire myself out.

JT: We warm up an hour before we do our dynamic warm-up. But for me, I need to have a moment to tell myself that everything is going to be OK. You’ve raced so many times before and you haven’t died yet, and this is going to be hard, but in the end it’s always worth it. I kind of mentally walk myself through the race in that way, and at the end of it I am always ready to go and excited to race.

JU: Aside from the usual warm-ups, I don’t really think about the race at all. I continue conversations as usual because I like to think that it’s just a race. This is what I do every day. I run in circles, and this is absolutely not different.

What’s your favorite part of the track and field team?

JU: Definitely the community — it is my favorite part, and being able to unwind on the runs.

JT: For me it’s the same thing — so many of my closest friends are on the team.

JU: I’d say 90 percent of my friends are on the team. It’s not that I don’t branch out, it’s that the team is like 100 or something people.

JC: That’s pretty much it for me too — the community.

Any advice for young runners?

JC: Have a good schedule — you don’t want to be too stressed out with school and running.