The Oberlin Review • May 2, 2014 • https://oberlinreview.org/5714/arts/playful-showcase-features-animalistic-aerialists/ 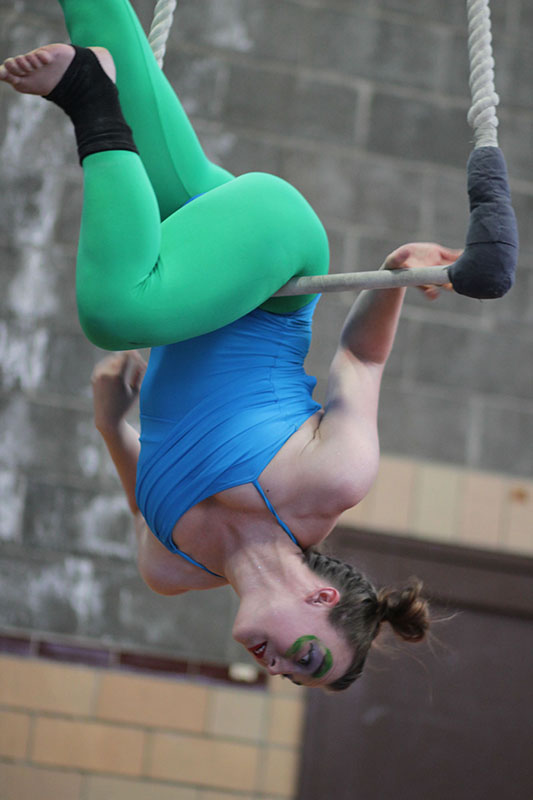 College sophomore Christy Rose performs a trick on the single-point trapeze during her frog-themed aerial routine during last Friday’s Circus Safari. The show, sponsored by the Oberlin College Aerialists, featured both new and veteran members in performances that drew inspiration from jungle animals.

The disorder of the jungle might seem an unorthodox pairing with the hyper-controlled technique necessary for aerial, but the combination worked wonders in the Circus Safari show held in Hales Gymnasium last Friday evening. The show, in which performers costumed themselves as a separate jungle animal that they then embodied during their routines, was hosted by College first-year Zoe Beach and College senior Rachel Webberman with the support of Oberlin College Aerialists. It made for an entertaining spectacle, especially as the show displayed the talents of aerialist veterans and newcomers alike. The concept was solid and allowed room for variation,though the “safari” theme could have been played up even more with decoration and perhaps choreography in some of the performances. However, in general, each of the performances was filled with lighthearted excitement as well as impressive aerial and tumbling skill, leaving the crowd simultaneously laughing and awestruck.

College first-year Juliette Glickman, who performed as a black mamba snake, has been doing aerials for six years. She instructs aerials at Moody Street Circus and teaches the tightrope ExCo at Oberlin. Glickman kicked off the show by slithering through a sultry and technically sound aerial silks routine complete with hyperextended splits and suspenseful drops. A bubbly performance by double-degree sophomore Christy Rose, in character as a tree frog, contrasted with Glickman’s fierce opener. Rose has only been doing aerials since Winter Term, but despite her lack of aerial experience, her strength and flexibility as a gymnast shone through during her powerful trapeze swing performance, which was rich with personality and technical skill. Her routine, though definitely solid, might have been made even more impressive by incorporating more tumbling tricks, which would have broadened the focus of the show. As announced before her act, Rose, combining her passions into an interdisciplinary project, is also in the process of developing wearable interactive sensor circuits for use with circus arts as part of her junior TIMARA recital.

The following routine, performed by a trio of baboons comprised of College seniors JessicaLam and Sam Karpinski and College junior Molly Barger, was both one of the technically simplest acts and one of the most entertaining. Lam and Karpinski instruct the aerialist ExCo class that Barger has been a part of for just six months, but despite the gap in aerial experience, the trio managed to pull off a cohesive, humorous number that conjured lots of cheerful laughter and applause. The trio dove into their performance with a slapstick-style comedy routine and even riffed on the Miley Cyrus single “Wrecking Ball” as they pushed each other on a rope suspended from the ceiling. Audience members roared with laughter when the soundtrack evolved into the popular remix of the song for recorder, and the

performers even incorporated prop instruments into their act.

College first-year Katharine Geber, as a tarantula, managed to relax the raucous mood induced by the monkeys with a focused and dramatic performance choreographed to Emilie Simon’s subdued “The Egg.” The act was an impressive reflection of her many years of training in the circus arts. Geber began aerials at the age of 15 and has trained intensively for four years at such places as Westchester Circus Arts, Circus Smirkus, The Santa Barbara Centre for Aerial Arts and Circus Warehouse. She has also taught aerials at Amazing Grace Circus camp and Westchester Arts summer camp.

College seniors Ida Hoequist and Sarah Francis, in character as a pair of sloths, likewise changed the pace of the show with a comic — and appropriately slow-moving — balancing act choreographed to YouTube hit “Sloth Rock.” The routine consisted primarily of Hoequist lying on her back while Francis moved in a deliberately delayed fashion, balancing in various ways through impressive weight distribution techniques and steady positioning. Rendering the performance even more charming was the backstory of the relationship between the pair, announced before their routine: They first met as roommates in Dascomb Hall their freshman year and have been doing acro together ever since.

Following the duo was College first year Clara Scudder-Davis, dressed as a fruit bat, who has been dancing since the age of seven. Scudder-Davis’s short silhouette performance was not as intricate as some of the other acts, which was understandable given her mere four months of aerial training. Nevertheless, the piece was an elegant and fluid demonstration. It will be exciting to see future performances by Scudder-Davis to watch how the circus arts can complement her dance background. College senior Sarah Cayer, another newcomer to the aerial scene, followed with an alligator themed performance. While she has been training for about six months, having gotten her start at Aerial Arts NYC and Innercirque Denmark and various Oberlin groups, her performance was spunky, mature and exciting. Cayer’s performance was one of the funkier acts of the night. Dressed in an alligator outfit that included minimal green, Cayer supplied flavor with a tie-dye t-shirt and an energetic aerial rope routine to Florence and the Machine’s “Girl with One Eye.” Her attack on the rope was inspiring, particularly because of her ferocity and conviction.

Throughout the show, Beach played DJ as she sat at a small table beyond the excitement. Suddenly, at the end of the night, she bounced out of her seat and took center stage. She immediately captivated the crowd with a masterful display of her six years of circus training. For her panther-inspired routine, Beach also used the trapeze swing, holding herself with dancer like concentration and hitting each position with strength and precision. Beach’s emergence from the wings to steal the show seemed like an apt metaphor for the show as a whole: one may not have expected much from the wacky animal theme, but it ultimately benefited from the low expectations, delivering grace, talent and poise.