The Oberlin Review • May 2, 2014 • https://oberlinreview.org/5721/arts/on-the-record-with-organizers-of-safesound-sexualized-violence-exhibition/

On the Record with Organizers of ‘Safe+Sound’ Sexualized Violence Exhibition 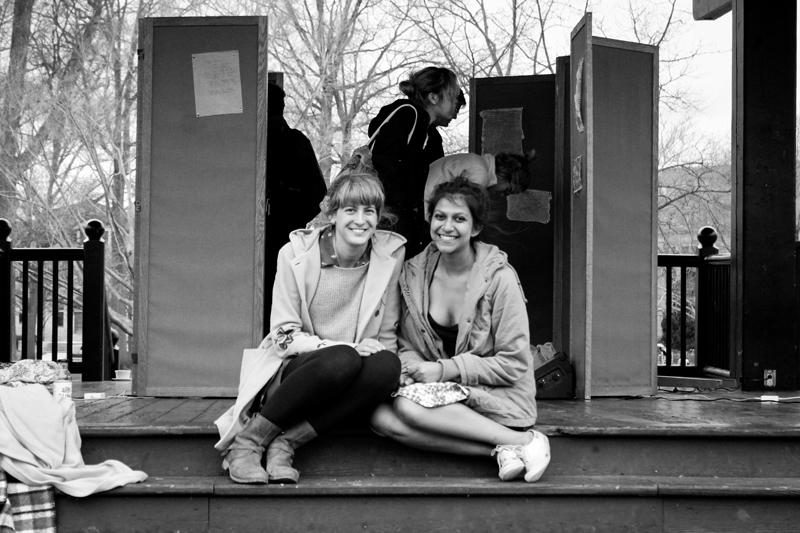 'Safe+Sound' organizers College junior Sophie Hess (left) and College sophomore Tinni Bhattacharyya pose on the steps of the Tappan Square bandstand during their exhibition. The exhibition featured a combination of anonymously submitted personal stories of sexualized violence and works of art by Oberlin students.

Last Thursday, multimedia exhibition Safe+Sound went on display in the Tappan Square bandstand to raise awareness of sexualized violence in the Oberlin community. The day before the exhibition, the Review spoke with the event’s organizers, College sophomore Tinni Bhattacharyya and College junior Sophie Hess about the process of putting the exhibition together and how they hope to accomplish their goal.

What is the origin of Safe+Sound?

Tinni Bhattacharyya: The project started because both of us are really interested in talking about sexualized violence. I’m a new staffer [at the Sexual Information Center], but Sophie has been a staffer for a while, so it’s something that we do a lot in terms of talking to people, raising awareness, counseling situations and stuff like that. Because it’s so present in our community, and also in light of the new Sexual Misconduct Policy, it seemed like the space was really necessary in our community.

Sophie Hess: Tinni’s an Art major, and I’m a former Art major, and we both have a lot of experience with art and installation. It sort of felt like we’d reached this point where we were teaching a lot of workshops and doing a lot of counseling and a lot of things taking place in the private space, and we really wanted a public space to be able to talk about what it means to survive violence, or what it means to have violence in your community.

You’re featuring anonymous stories of sexualized violence in the exhibition. How does that fit into the final product?

TB: There are two different parts to our exhibition. There are those anonymous stories that you mentioned, and also works of visual art. We’ve been talking about this a lot, actually — about this whole idea of public anonymity, and how that can be a really great experience for someone who’s telling a story because they getthat experience of typing out a story and putting it out there, and feeling like they’re being heard without feeling like who they are as a person is in any way invaded. … What ends up happening is that there’s going to be this internal space, like a room [where] all the walls are going to have all these stories that have been submitted so far, and that allows people to also relate and see, like, ‘Wait, this happened to someone else. This also happened to me.’ I think that can be really interesting.

SH: To speak about your experience with trauma in a public environment is a lot to ask of someone, and often if one person decides they want to speak out, there’s all this emphasis on like, ‘Share your story, break the silence.’ If one person does it, then they end up being sort of tokenized as the survivor. What I think that this does is it also takes away a lot of the aspects where you can [tokenize people]. The anonymity of it makes it a little bit more universal. And at the same time, that person does get to put their story out into the public — [they can] sort of like take it from their head and make it into an object.

How did you compile the show’s visual component?

TB: For the visual arts parts of it, we basically put out a call to artists through a couple different ends, and basically anyone who wanted to share something; it was completely up to them. We were very much like, ‘This can be in whatever format you want. If you want it in the exhibition, it’ll be in the exhibition.’ And that was really important to us, because … people at Oberlin are so creative and they express themselves in so many different ways, so we kind of wanted to target a lot of visual arts, creative writing and then sound and music.

SH: And we also had to be pretty broad, too, because we really didn’t want to discount anyone’s experience with violence because we all have them. When we’re at a rate where one in four people on campus is sexuallyassaulted, it means that a person [who has been assaulted] probably has three friends who are supporting them, so everybody has a relationship to it.

How do you feel about the final product? Are you excited?

SH: I’m really excited, but I still feel like it’s going to be surprising because we haven’t actually put everything together in one space yet, because a lot of the materials are really heavy. So I know what it looks like in my head, but when it comes tomorrow, I’m really excited to see what it is. And it also really changes — when we first got the submissions, they were written on paper. I had this reaction to them, and when people started reading them, the reaction is totally different. I think watching people see it will be totally different.

TB: And also, we reimagined the space so many times, partly because of logistical issues, but also because we realized that this space required something different from what we originally thought it would. So while I have a picture of it in my head, I feel like the second it goes up, it’s just going to create an environment that we don’t really know. There are going to be so many aspects of it. It’s going to be so visually interesting, but also a lot of the sound things. Really, to me at least, it’s hard to imagine how those qualities will interact with one another.

How do you expect the community to react to the exhibition?

TB: First of all, we would ideally like people to put up their stories, because one of my biggest concerns was that we weren’t reaching out to as many people as possible. It was more like, Sophie and I have these friends who seem to be really paying attention, and I have these friends that are paying attention, but then there are so many people on this campus who probably have had an experience with some form of violence that haven’t been able to share their stories. I think that that’ll be a really interesting thing to see, what other people are comfortable sharing in that space.

SH: We’ve had a ton of positive feedback in putting it together, but I have no idea what’s going to happen. I feel really good about it. Even though we’vedesigned every part of it, I feel like we’re just curating it, too, and it’s really just [that] we’re creating a platform for other people to tell their stories.