The Oberlin Review • May 9, 2014 • https://oberlinreview.org/5783/sports/sheldon-ends-career-with-nationals-bid/ 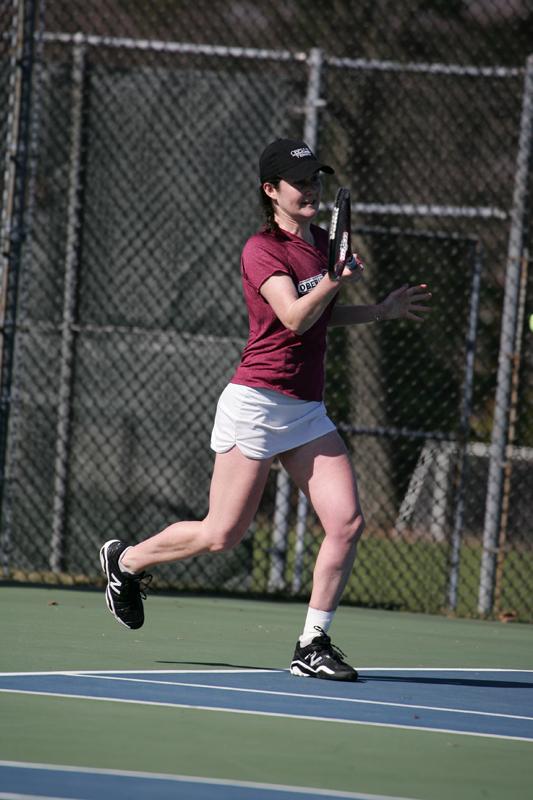 Senior Brenna Sheldon eyes the ball in a match. Sheldon boasts an impressive 21–6 singles record and 20–7 in dou- bles. She recently earned a bid to the NCAA Division III ten- nis tournament.

The women’s tennis team finished out its season in the North Coast Athletic Conference match at Kenyon College with a third place finish on April 27. The Yeowomen ended their year with a conference record of 3–0, improving on last year’s mark of 2–1.

One of the most notable aspects of the weekend was the culmination of senior Brenna Sheldon’s conference play at Oberlin. After her four years, she sits in third place for individuals in the Intercollegiate Tennis Association Central Region’s rankings. Due to her high ranking, Sheldon received a bid to the NCAA Division III National Tournament.

“Emotionally, Brenna was always a rock,” Head Coach Constantine Ananiadis said. “Physically and tactically is where she’s had the most improvement. She’s now a lot stronger and can do more things with the ball; she’s much more versatile.”

Sheldon credits two of her former teammates as mentors who facilitated her growth.

“I have improved a lot as a tennis player over the past four years in large part because I learned how to handle my injuries,” she said. “I’ve certainly been inspired by Ariel Lewis [OC ’12], our No. 1 from a couple years ago, and Farah Leclercq [OC ’13], who graduated last year. I always loved playing [at No. 2] on the court next to them.”

Even while improving her skill set and becoming stronger, Sheldon has faced multiple challenges over the years.

“Injuries. Many of them,” said Coach Ananiadis. “Her back was the most major, as well as debilitating, one. Brenna hardly played her freshman year. She’s one of the most resilient people I know, though, so she kept a smile on her face and continued working. She’s so deserving of all this recognition she’s getting. This couldn’t have happened to a nicer, more deserving person.”

Sheldon considers her biggest challenges to be her injuries as well, but when asked about her greatest accomplishment, the answer was obvious to her.

“The best match I ever played was my junior year against Case [Western Reserve University],” she said. “I was playing at No. 1, and our match lasted three hours and fifty minutes. I lost the match, but I wasn’t sad because I left everything I had out on the court. I love the feeling of putting absolutely every last ounce of effort I have into a match. After that match I could barely stand up. I think some people would find it crazy to love that feeling, but other athletes probably understand.”

Sheldon first became interested in tennis when she was 13, and began to think about playing in college shortly after that.

“At first, I thought I wanted to go D-I,” she said. “But luckily I figured out that D-III would be much better for me.”

Aside from loving the friendly atmosphere of Oberlin, it was ultimately Coach Ananiadis who convinced Sheldon to play here.

“He would call and send letters, and after a while I just couldn’t say no,” Sheldon said.

Sheldon’s tennis experience prior to college was also a formative time for her current playing style.

“I’ve always been a counter-punch player,” she said. “Playing on red clay in Spain for a year during high school, where the mentality is to grind through really long points, really contributed. Some pretty bad injuries in high school and early college made me appreciate my body and tennis, too. Especially throughout college, I’ve always felt lucky to play. In my four years there has barely been a day when I didn’t want to be out there practicing.”

Despite only having played with Sheldon for a year, first-year Emma Brezel spoke highly of her teammate, praising her as one of the most hardworking, positive individuals on the team.

“I have never seen someone fight for every point the way Brenna does,” Brezel said.

Junior Grace Porter, Sheldon’s doubles partner, also couldn’t help but gush about her teammate of three years. “Being on the same team as Brenna is amazing,” Porter said. “She is a strong leader and leads by example more than anyone else. We have a very balanced doubles dynamic on the court — her intensity never falters, which keeps me focused, and I think in return I help her relax a bit and remain calm in tough situations.”

Sheldon said she is incredibly excited to have received this bid; to her, it means going as far as she possibly can as a Division-III player.

“I’m so happy and lucky to go to nationals,” she said. “It’s gonna be fun. Also, I’m really happy that I get to stay in season right up until graduation. I wouldn’t have it any other way.”

Sheldon will be in action at the Nationals Tournament May 22-24 in Claremont, CA.