The Oberlin Review • May 9, 2014 • https://oberlinreview.org/5809/sports/in-the-locker-room-with-assistant-football-coaches-bob-saunders-and-nate-cole/ 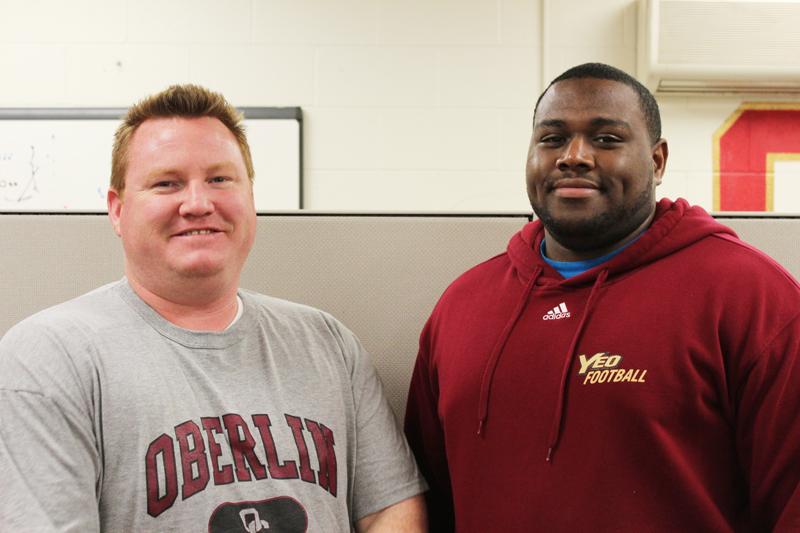 This week, the Review sat down with first-year Assistant Football Coaches Nate Cole and Bob Saunders to discuss past jobs, what NFL players they’d like to coach and the new era of Oberlin football.

What drew you to Oberlin?

Bob Saunders: I had spent some time in Division III football at Washington University in St. Louis. That is also a very high academic school, and knowing the type of student-athletes that they had there, I figured it would be similar here, where there are extremely smart guys — extremely hard working and willing to do whatever it took to get better. That’s the kind of environment that I was looking for to continue my coaching career. The opportunity came up here with Jay [Anderson], where he’s changing the culture of what the football program is all about, and along with the new facilities here and the vision Jay has of the direction of the program, it was all very intriguing to me.

Nate Cole: Pretty much, like Bob said, opportunity. The opportunity to mentor kids, young men, and develop them into upstanding citizens and teach them how to go about life, being accountable in all areas of their life. It’s a new era here, and I couldn’t wait to be a part of that.

Where were you before Oberlin?

BS: I played at Southern Methodist University in Dallas, Texas. I spent most of my career on the professional level. I had stints with the Kansas City Chiefs, the Washington Redskins, the [St. Louis] Rams. I coached wide receivers for two years in the United Football League. At the college level, I coached quarterbacks at Washington University in St. Louis, and I was the offensive coordinator and quarterbacks coach at Kansas Wesleyan University last year. Now I am the offensive coordinator and quarterbacks coach here.

NC: I went to the University of Toledo; I played and started there for three years. Immediately after getting done, the coach called me back, and I was a graduate assistant there for three years. My first year, I was mostly involved with centers and guards; the second year was more so tackles and tight ends and my last year I worked with tight ends and fullbacks. I am here right now as the offensive line coach and special teams coordinator.

What was your favorite part about your college football experience?

BS: The camaraderie of the guys that you are around every day and being able to be a part of the sport that you love. I have been around football my entire life; it’s given me the ability to have a deep understanding and respect for the game. [I have enjoyed] Having the relationships that you get through being almost forced to lean on other people on a regular basis to meet the goals that you want to have personally and as a team.

NC: Exactly the same for me. The camaraderie, the brotherhood — that is your family. You see them more than you see your parents, you wake up with them every day and you have those relationships that will last forever.

Are you excited for the new stadium?

BS: I am thrilled.That is a huge piece that we need here in order to enter into the new era. We are all very excited about it; we talk about it almost every single day. It’s going to help out quite a bit, for recruiting, and for other sports as well. It’s a huge addition to this already outstanding college campus.

NC: I can’t wait. Words can’t describe it — our own turf field. It’s a reassuring feeling that they are putting in a lot of money and backing our program. This program is taking a step toward the right direction and having a stadium is incredible.

If you could work with any NFL player, who would it be?

NC: I have two. The first: Warren Sapp because of his whole attitude and swagger. The next player I think would be Jon Ogden or Orlando Pace. If I could have my wish — rest in peace — but I would like to work with Deacon Jones.

BS: He went with all former guys. One current guy I would like to work with is Peyton Manning. He has a high intelligence level and understanding of the game — that’s a guy that can probably teach me as much about football as I could teach him.

How many new recruits are you bringing in next fall?

BS: I think there are 23 incoming freshmen, and there may be a couple more, maybe 25 or 26. That would put the roster right at about 50, which is outstanding and a good start for where we want to head this program. This is the biggest recruiting class that we have had in a long time. These are kids that can play football. Half our team will be freshmen, so we will have some inexperienced guys. As far as collegiate football is concerned, they are good athletes, and kids that we feel can step in and help us out immediately. We are headed in the right direction, and are really excited about this incoming class.

NC: I live by recruit, retain, develop. We are going to recruit good student athletes, good ball players. We have to be able to keep them here and develop them. We are going in the right direction and going forward and keep bringing in good, high-quality guys and high-character guys.

What are your expectations for the 2014 season?