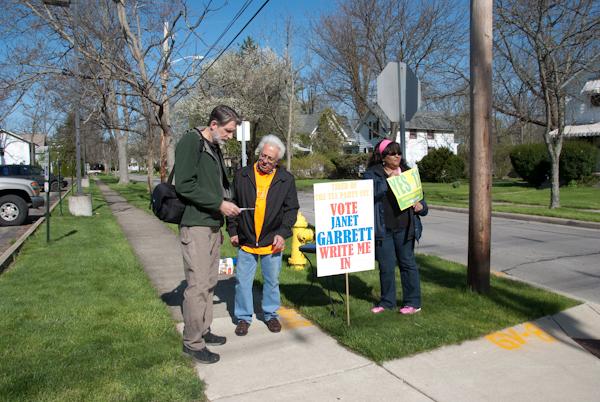 Voters converge outside of Philips gym to campaign for Janet Garret, a write-in candidate from Oberlin who ran for U.S. Congress in the Ohio primary election on Tuesday. Some other ballot features included Issue 22, Issue 11 and the Democratic and Republican primaries.

Despite a turnout rate that many officials are referring to as “abysmal,” Lorain County residents convened at the polls this Tuesday to cast their votes in the Ohio primary. Ballot features included gubernatorial candidates as well as numerous state and local issues. Several of the more potent results of the election include the approval of Issue 22, an Oberlin tax levy that will raise the income tax in Oberlin by three-fifths of one percent and the rejection of Issue 11, a Lorain tax levy proposed to fund county transit.

“Fitzgerald is talking about a lot of issues that … Kasich just can’t defeat him on, like education in the area and how much money [Kasich] has cut toward education or women’s rights,” OC Democrats Co-chair and double-degree fifth-year Eric Fischer said. “Things [like] that need to be talked about throughout the state, [but] Kasich can’t address [them] because he doesn’t have credibility on those issues.”

Fitzgerald’s gubernatorial platform largely echoes his county executive campaign, with emphasis on job creation, worker protection, education and spending cuts in Columbus and spending in education. As county executive, Fitzgerald sheared the county payroll by nearly $25 million, reworked a failing property reappraisal system and offered employee health insurance, sewer maintenance and other services to municipalities. Although many see the candidate as highly successful, Fitzgerald’s campaign has had several lowlights.

Conservatory Senior and President of Oberlin College Republicans and Libertarians Taylor Reiners identifies his choice in running mate as one of the campaigns greater failures.

“He had to get rid of his first choice for Lt. Governor, Eric Kearney, because he owed over 800 thousand dollars in unpaid taxes,” said Reiners in an email to the Review.

Throughout his term, Kasich has eliminated the largest budget shortfall in state history. His term is marked by a $3 billion tax cut, achieved through the elimination of the death tax, a 10 percent decrease in income tax and a 50 percent decrease in taxes for small businesses. Under Kasich, Ohio has become a national leader in job cre- ation, and the administration has seen a recent surge in approval ratings.

Some, however, see his budget cuts as misguided. College sophomore and OC Democrats Co-chair Madeline Peltz cites these cuts as part of the reason tax levies, such as Issue 22, are necessary.

“Kasich has cut local government budgets across the board and lowered state taxes, but what has happened [is] that local taxes have needed to be raisedbecause[of ]the infrastructure … Issue 22 is a symptom of that,” said Peltz.

Issue 22, which received much more media attention than its peer amendments, proposed the raise of Oberlin income tax from 1.9 to 2.5 percent. Such an increase would pad the city’s steadily declining budget. A 42 percent reduction of local government funds, the elimination of the estate tax and lower interest rates due to the poor economy have all forced the city of Oberlin to use its own reserves to fund this year’s budget.

The revenue garnered from the tax hike will also enlarge the city’s general fund, which is used both to pay Oberlin’s 150 full-time and 60 part-time employees and to fund the city’s police, fire and parks and recreation departments.

“One of the reasons we’re hop- ing that the voters approve this now [is] because, if we continue to use re- serves, it’s kind of like killing the goose that laid the golden egg,” Sal Talarico Oberlin’s Finance Director said. “It eliminates yet another source of rev- enue, because eventually the interest rates will come back.”

Though Issue 22 passed this Tuesday with strong support, staunch opposition remains. Former City Council member David Ashenhurst contended the legality of the issue, claiming it did not receive enough council votes to be on the May ballot. This claim was proven to be unfounded, and the issue made an appearance in Tuesday’s election. Associate Professor of Philosophy Tim Hall is one of several other residents who believe that this tax increase was unnecessary.

“The city of Oberlin has steadily increased its tax rate since 2001, when I moved here. The city generally spends money well in excess of necessary city services. It is this fact that I would highlight to Oberlin residents, rather than any reductions in state spending,” said Hall in an email to the Review.

Different views are held by City Councilmen Scott Broadwell and Talarico, who see the tax hike as necessary for the city’s economic security.

“I am obviously very pleased. I had no idea last night how this would pan out in the end; I am not only pleased with the result, but also the margin of passage,” said City Council President Broadwell in an email to the Review. “As I said before, the state has bal- anced its budget by cutting our fund- ing without providing replacement revenue. If we had not lost those revenue sources, there would have been no need for this income tax increase.”

Another widely campaigned feature of Tuesday’s election was Issue 11, the tax levy to raise money for transit in Lorain County. The issue, which proposed creating a revenue stream through an annual cumulative property tax of $400,000, failed to garner the majority of voter support.

“As is the case with all but a few goods and services, there is no special reason to have government-run buses or other automotive transportation services,” Hall said. “If the point of the measure is to increase benefits to the poor, a straightforward increase in welfare benefits should be proposed.”

This is not the first time the transit issue has been defeated, as voters shot down a previous levy request of $250,000 in last year’s primary. Supporters of the levy hope to push to have a transit levy on the ballot again in this November’s election.

“There are an awful lot of people that depend upon public transit to get to jobs, to get to school, training so they can get a job… [It] just give[s] people the opportunity to do their day to day activities,” Broadwell said.

The OC Democrats were also excited about U.S. Congress write-in candidate Janet Garrett. After the 2010 census, the Oberlin area was redistricted and Republican incumbent Jim Jordan’s district. With no Democrats running in the primary race, Garrett needed only 50 write-in votes to be on November’s ballot. As of print, the results have not been announced, but Garret is expected to receive enough votes.

“She has a long career as a public school teacher. She has strong convictions about living wage, preserving social security, equal rights for all, and we really need Democratic persons from Ohio who can take those positions,” said Kendal resident John Elder, OC ’53.

Elder sent mailings to fellow Kendal residents in support of Garrett’s candidacy. He not only supports her platform, but also said he sees her candidacy as a strategic way to combat Tea Party candidates in other districts.

“The incumbent republican congressperson is a strong Tea Party Republican, and if we can keep him tied down in his own district, having to campaign here, spend money here, then he won’t be able, as he could if there were no opposition, go and sup- port Tea Party candidates running for Congress in other districts,” Elder said.

Fitzgerald won by an almost 60 percent margin in the gubernatorial primary against Larry Ealy, a suburban Dayton resident. Ealy, with at least 37 guilty court verdicts and no campaign money, was able to gather over 1,000 signatures, enough to earn him a spot on the primary ballot.

Charlie Earl, the Libertarian nominee for governor, was bumped off the primary ballot after his professional signature gatherers allegedly failed to list their employer. Earl may still appear on the November ballot and, if so, is expected to siphon votes from Governor Kasich.