The Oberlin Review • May 9, 2014 • https://oberlinreview.org/5820/news/judicial-advocacy-group-offers-peer-to-peer-legal-support/ 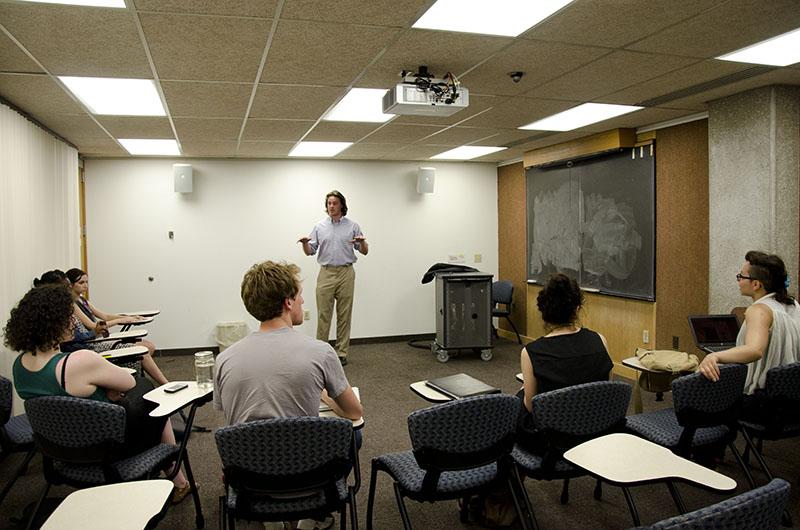 College senior Mac Muir meets with fellow students in order to discuss objectives of his new organization, Oberlin Peer Advocates. The organization will work to pair students in need of support with peer student advocates.

When Helen Lai received a judicial letter from ResEd after failing a life safety inspection, she turned to fellow College senior Mac Muir for advice.

“Honestly, I don’t know what I would have done if he wasn’t there,” Lai said. “I think I probably would have made a fool of myself or been more aggressive or more scared of the situation.”

Muir, a Politics major and Africana Studies minor, has become an informal source of information, advocacy and emotional support for many students who have been involved in the school’s judicial proceedings, academic probation or the sexual offense process.

In Lai’s case, Muir met with her to explain the process and then served as her student advocate during a meeting with Timothy Little, the area coordinator for Village Housing and off-campus students. Lai said that she had to work the Village Housing event Rock the Block for three hours in order to “enter back into the community as a responsible citizen,” but that no charges were filed, and she wasn’t fined.

Many of the cases Muir has advised on were more serious than Lai’s, and generally resulted in more severe consequences — including expulsion — for involved students. Despite the range of outcomes, Muir believes that student advocacy is greatly needed on campus.

“I’ve lived in Afrikan Heritage House my entire time here except for when I’ve been living off campus, and that, I think, really exposed me to a lack of support from the school,” Muir said. “Last semester, as far as I know, at least five Oberlin students of color were expelled for academic reasons — some folks on their last semester of school. And I’m thinking, ‘These are some of the brightest people I’ve spent time around at Oberlin, and they’re no longer going to have a chance to get this degree.’ And that’s been really frustrating for me, and I think I have the opportunity to change that in a certain way and provide support.”

Muir got the idea to create a group of student advocates, tentatively called Oberlin Peer Advocates, while working in Colorado during spring semester of last year. Last Winter Term, Muir, along with two other students who wished to remain anonymous, created a six-page document outlining a plan for a student advocacy group. In their mission statement, they stressed that the organization would be student-centric in nature.

“As members of the Oberlin College student body, we have identified the need in our community for a student-run organization that operates to assist Oberlin students in navigating the College’s bureaucracy with an overarching goal of providing an autonomous, accessible and confidential source of information and support,” they wrote. “We envision a student advocacy group … that seeks to provide multiple forms of creative and flexible solutions that cater to the needs of the student body.”

The group could also remedy what Muir sees as a need for long-term aid from peers involved in these processes.

“Right now, there’s a real lack of student support for students going through those processes, and there’s no semblance, as far as I can see, of long-term support for those folks,” he said. “So when people leave the process, it’s ‘Best of luck getting back into the community and having a successful academic career,’ and the idea of this would be providing both short- and long-term plans for success for students who go through these processes.”

According to a Conservatory sophomore who underwent judicial proceedings after being accused of trafficking drugs by another student, and agreed to be interviewed on the condition of anonymity, involving student advocates in the judicial process enables students to better represent themselves.

“I’m not a huge fan of the legal system right now, but it’s better than what Oberlin offered me,” the student said. “There’s more of a safety net; there’s more things in place to defend yourself. … It’s going to allow someone in my position to have a group of people that they can talk to who know everything there is to know about this, or who have been through it, and can console them and explain to them what they’re going to experience and how to go about dealing with it in the best way possible.”

Although Muir believes the current system — wherein class deans meet with students who are on academic probation — to be positive, he said that students could support their classmates further, thereby unburdening the administration.

“Deans are overworked in so many capacities,” he said. “Whenever people are critical of the administration, you need to be attentive of the fact that deans have an incredible amount of responsibility. They came into the school looking to be involved in education, and yet they’re handling a lot of incredibly difficult situations. And so what’s better to say, [than] ‘Hey, we as students want to take control over some of this.’ “

As part of this effort, Muir led a recruiting and informational session last night in Mudd to discuss the fledgling group. He hopes to hold other such sessions throughout finals period in order to garner support among students, especially underclassmen, who can continue advocacy work after he graduates this semester.

Currently, Muir envisions that this process will include an anonymous Facebook forum similar to Oberlin Confessions, in which students can seek assistance from the group anonymously, rather than relying on word-of-mouth to discover the service. At Thursday’s meeting, participants decided to get the forum up and running by this summer.

He believes that the entire community can benefit from this sort of support, given the potential to bring students from different parts of campus together while providing the opportunity for them to practice advocacy.

“I think that in the cases where I’ve worked with folks, it’s been humanizing and helpful to have someone there to say, ‘How are we going to do this?’ “said Muir. “There’s a sense of public defense and I think that’s where there’s a big appeal to the Oberlin campus. …We get a Law and Society major with very few chances to practically apply those skills. Even within politics there are all sorts of majors. These are folks that may want to be public defenders. Why not have a way for folks to learn how to advocate for student members and at the same time build a stronger community? I see really great value in that.”