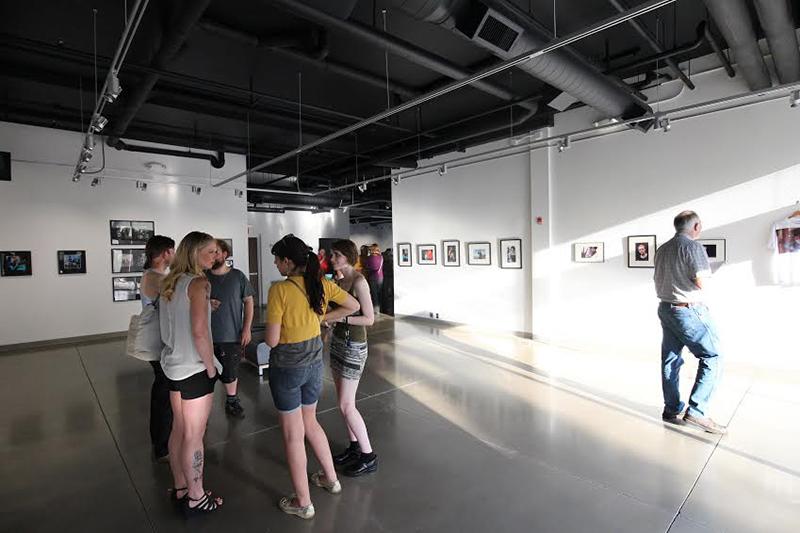 Prospective improvisers participate in games during auditions for Oberlin’s trio of improv troupes. The auditions took place in Warner Gymnasium and spanned the course of three days.

The framed photographs hung on the wall like windows into the subjects’ lives: an old man wearing sunglasses and throwing a yo-yo, a young woman holding a wide-eyed cat, a child waving goodbye while trapped by the photo’s edge. These portraits can be found in the exhibit Seeing Community: Visions from NEO, which opened June 27 and runs through Sept. 19. The exhibit showcases the work of 16 local photographers displayed in the Richard D. Baron ’64 Art Gallery located in the College’s Dewy Ward ’34 Alumni Center.

While each artist demonstrated their unique style, common themes such as interrogation of gender and gender roles, observations on age, examination of race and exploration of self-identity resonated throughout the exhibit. Hadley Conner of Oakwood Village, Ohio, creates insightful commentary on girlhood in her portrait “Information Please.” In a bedroom strewn with dress-up clothes, two girls pose. One stands in a fringed black sleeveless shirt, pink leggings, a black beret and a strand of pearls. Her eyes are big, admiring herself, yet also scrutinizing her appearance. The second girl sits to the right in an armchair wearing a dark plaid dress. Their mother appears in the mirror of the bedroom, peeking in to check on the girls while she takes a telephone call. The first girl poses in the same position as the mother, while the other imitates her by pretending to talk into a large peach telephone. This carefully constructed image depicts the admiration girls have for their mother, but also displays an eerie feeling of ephemeral childhood. The photograph also suggests that girls grow up pretending to be society’s vision of a perfect woman — that is, a concerned housewife.

Jennifer Manna’s photographs complement Conner’s art well by bringing gender roles to light. In particular, her piece “Mary Poppins,” which depicts “Jane” and “Michael” apparently naked but covered by a fuzzy blue blanket, reveals how girls are societally conditioned to view their own bodies as indecent and vulgar. Manna skillfully captures Jane’s discomfort — her mouth agape in shock, her arms protectively holding the blanket over her chest, her shoulders slanted with one shrugged upward. In contrast, Michael seems unconcerned with his nudity, his face and body positioned straight at the camera.

In Conner’s black and white diptych — appropriately titled “Boyhood”— one panel displays a tough-looking teenager wearing a leather jacket and chains hanging from his hip. This image is juxtaposed with a second panel that shows a younger boy in a plain white T-shirt surrounded by cars in a parking lot. While the two images at first contrast in their depictions of boyhood, similarities prevail. With the boys’ backs turned toward the camera and the angle of the photos set off-kilter, feelings of confusion, loneliness and loss settle in.

Mika Johnson and Micha Hilliard also accurately capture an uncomfortable depiction of boyhood in “Space Man.” A boy sits with his hands on his elbows, wearing a suit coat and tie and staring glassy-eyed at a point beyond the camera. Behind him rests a chalkboard littered with Newton’s law of universal gravitation and other physics equations. Johnson and Hill ard’s photos add humor to the exhibit, but also use dramatics and satire to bring to light serious issues such as the dangers of a “treadmill” education system — one in which students are pushed to keep doing more, but are no longer learning. The boy’s vapid expression tells the story of parent pressure, sleepless nights memorizing formulas and a lost childhood.

Art Department Co-Chair and Professor of Studio Art and Photography Pipo Nguyen-Duy also successfully uses humor to communicate a serious point in his four self-portraits, part of a larger collection titled AnOther Western. Drawing inspiration from Asian theatrical and visual arts, and from American tintype portraits that were popular in the West during the 1800s, Nguyen-Duy, a Vietnamese man, portrays himself as various powerful figures of the American West: a gunslinger, a general, a doctor with an amusing fake moustache and a musician carrying a creepy puppet. While these portraits challenge the stereotype of emasculated and submissive Asian men, one also understands that these assumed identities are an absurd masquerade, illustrating immigrants’ struggle to retain their homeland cultural identities while also trying to fit into an American one.

The diversity of the pieces complemented one another and added a sense of scope to the exhibit. However, while each composition was aesthetically pleasing, some of the untitled pieces and close-up portraits of only the subject’s face did not have as much depth as the rest of the exhibit. In these portraits, the artist provided fewer clues into the personality of the subject, making it harder for viewers to weave a story about the subjects’ lives or take away an insightful observation. There is also much to be gleaned about personality and emotion from a subject’s body language, which can sometimes be lost in a headshot. Despite this shortcoming, the exhibit as a whole successfully communicated the humanity in the residents of northeastern Ohio. One is struck by the realization that our neighbors are both creative artists as well as works of art, each built from a diversity of unique experiences.