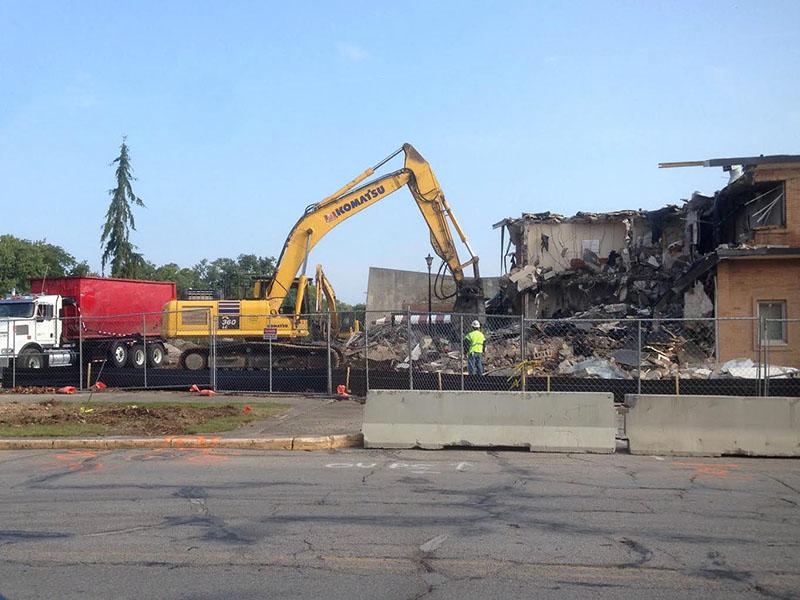 Demolition of the Oberlin Inn began in earnest this week, marking the start of a 15-month period of construction on the corner of Main and College streets. The new facility, which will open in its entirety in the fall of 2016, will include a refurbished 70-room hotel, conference facility, retail space, restaurant, lobby area and admissions wing, all combined into one 100,000-square foot complex.

According to former Vice President for the Office of Finance and Administration Ron Watts, the Inn will serve as a large financial stimulus for the Oberlin community. “ The old Inn is obsolete and has been obsolete for 30 years,” Watts said. “This will give us the ability to do larger events, weddings and to have a sit-down building for 300 people — there is nowhere in the area for that capability. We need to make it a destination point, to program the building to truly increase revenue and the number of people coming to Oberlin to utilize it.”

Phase one of the new complex, which includes the hotel, conference center and retail space, will be completed by this November and will continue to operate while the rest of the complex is developed. The remodeled Inn will also host a number of sustainable features, including a geothermal system and 30,000-gallon tank to store rainwater for reuse. The facility is also the first building to be a part of the Green Arts District, a development plan that aims to “transform downtown Oberlin into a thriving and environmentally sustainable center for community and the arts,” according to its website. The College is largely responsible for funding this phase of the complex, using finances garnered from private donations and new market tax credits. The College is also investing some of its own revenue into the facility’s new admissions and development wing.