In the Locker Room with Ellie Huizenga, Tricia Souza and Sarah Willette. 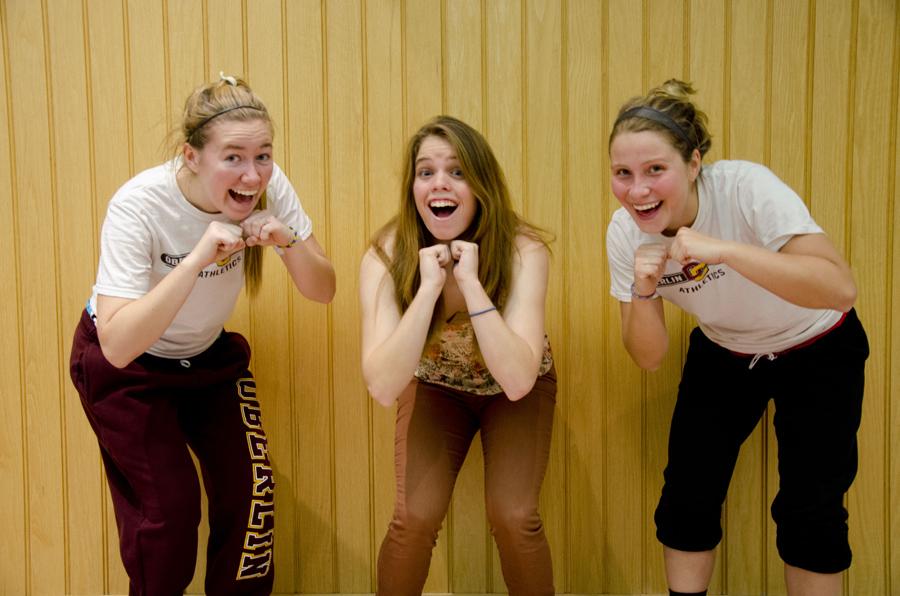 This week the Review sat down with sophomore soccer players Ellie Huizenga, Tricia Souza and Sarah Willette to discuss the responsibility that comes with sophomore year, Mamma Mia medleys and intramural basketball.

How is being a sophomore on the team different than being a first-year?
Ellie Huizenga: Oh, it’s so different.
Tricia Souza: I feel like we have a lot more responsibility on the team now that we know what’s going on. We can be a part of the leadership of the team.
Sarah Willette: Especially since we have such a large freshman class, too — we have a lot more responsibility. Technically, we’re upperclassmen, since they outnumber us and the [juniors and seniors].

Since you are the only three sophomores on the team, do you feel a special bond?
EH: Most definitely.
TS: We definitely developed a closer relationship second semester last year and this semester.

What was your favorite part of this season?
EH: I don’t know. It was a tough season. I guess getting to see everyone blossom, which is cheesy. But I think everything was so different and so new this year that as the season progressed, you could see changes so distinctly.
TS: My favorite part was definitely our last game because you could tell that we had implemented all the things we had been working on all season. We played really, really well together and it was exciting to see. That game was great to be a part of.
SW: I’d agree, that Kenyon [College] game was spectacular. It was really fun, and in comparison to last year, our team has evolved so much, so seeing the progress from the last game last year to the last game this year was incredible. Night and day.

How was this season different from last season?
EH: We had 12 freshmen come in, a new coach, and so not only did the team dynamic change but the way we play on the field changed.
TS: We had a completely different mindset about the way we went about practice and the way we went about games. We weren’t really coached last year, and this year we got a lot of direction, which really helped. I think it brought us closer, and I think it made everyone a better soccer player too.

What is your relationship like with the men’s team?
TS: My best guy friends on this campus are on the men’s team. They’re a really great group of guys, and they are really supportive of us, and we are definitely supportive of them. It’s like a big family. It’s really cute.
EH: There’s definitely a sense of team unity, too. Over half of our girls’ soccer team went out to their game this weekend that was four and a half hours away and I think the boys would do the same for us. When we lose together, we win together.
TS: This year I was definitely living vicariously through their success. I was like, ‘Oh, we’re going to the national tournament!’

Do you have interesting team traditions?
SW: Mock dine ding.
EH: We yell “mock dine ding” at the beginning of every game which means “do your thing.”
TS: We have a stomping circle before the game where we clap our hands and stomp our feet. It’s supposed to get us fired up.
EH: We have the hustle suit too, where if you win a home game you get to wear the hustle suit out. Willy [Sarah Willette] wore it this year, as our sophomore rep!
SW: We’re also going to start a talent show.
TS: That will probably also be a hot mess.

What are you most looking forward to in the offseason?
SW: Scrimmage day. That is the best time; it is amazing. Scrimmage day last year, we had such a small group go. We had six or seven people go, but it was so fun. You are playing teams, and it’s lighthearted and it’s a lot of fun.
TS: Last year, Kate Frost was playing lacrosse and so she couldn’t play, and each of us had to take a turn in goal and it was a hot mess, but it was a lot of fun.
EH: I’m excited to see our freshmen blossom not in soccer season.

I hear you also have an intramural basketball team?
EH: We realized that soccer and basketball are not the same.
TS: We are doing so well though. Our first game we scored six points and in our last game we scored 58.
EH: It’s night and day in that, too. Just saying.
TS: We have developed a basketball squad.
EH: It’s fun. We get about half the team to come to our basketball games. It’s a lot of fun. We just run around like maniacs.