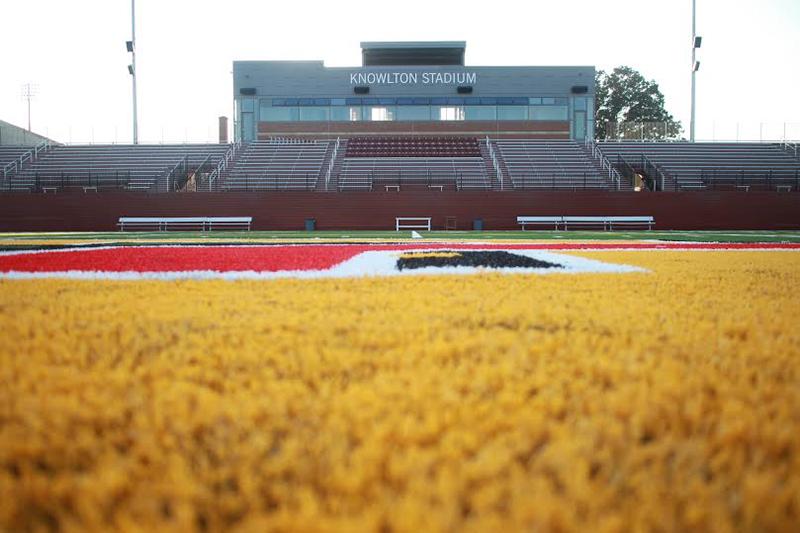 A view of the new Austin E. Knowlton Athletics Complex. The complex will host a multitude of Homecoming activities this weekend.

The football team will play its first-ever game under the lights in the new Austin E. Knowlton Athletics Complex against The College of Wooster Fighting Scots on Saturday, Sept. 20 at 7 p.m. Not only will this be the first night game ever played at home in Oberlin College football history, but it will also mark the culmination of the College’s Homecoming and alumni weekend events.

At the ceremony, Delta Lodge Director of Athletics Natalie Winkelfoos proudly said, “The [$8 million donation by the] Knowlton Foundation has given us the opportunity to restore tradition while working forward to foster success.”

After witnessing the massive undertaking that was the construction of the new facility, students, athletes and alumni will join in celebrating the old and the new in an especially significant Homecoming.

Oberlin athletes have expressed certainty that this year’s Homecoming celebration will stand out more than any in the past.

“There’s definitely going to be a lot of people there,” said junior quarterback Lucas Poggiali. “I think everyone will be excited to see the new stadium — nothing like this has ever happened in the Athletics program before, and I think especially alumni want to come see it.”

Poggiali isn’t the only athlete who could hardly contain their excitement.

“With all the alumni back, and prospies here, there’s going to be a lot of excitement,” said senior lacrosse and football player Erickson Andrews. “I’ve been telling everyone I know to come to the game.”

Fifth-year field hockey defender Hannah Christiansen also spoke to the improved atmosphere around the stadium, as her team became the first to play on the new field last weekend.

“Having the new stadium and the new building not only gives motivation to the athletes but I think should definitely build excitement in the student body,” she said. “There are beautiful stands to sit in, nice bathrooms, an up-to-date sound system — everything’s there to make the experience of going to games more fun.”

Aside from the Homecoming fanfare, Oberlin athletes and coaches are also enthusiastic about what the new complex means for their teams’ athletic experiences.

“The athletic complex is a huge commitment from our administration, and it shows that athletics is important on our campus,” said Head Football Coach Jay Anderson. He added that the new facilities are sure to enhance the Oberlin Athletics program by improving player development, the recruiting process and the team’s overall game-day experience.

Christiansen and junior field hockey player Sophie Weinstein both emphasized that the new turf is especially important for them because field hockey is a sport meant to be played on artificial turf. Until now, the Yeowomen have played and practiced on grass fields.

“You can do so much more with the ball and with your style of play [on turf],” said Christiansen.

Besides the physical advantages the field presents to athletes and coaches, there’s also a widespread sentiment that the completion of the Austin E. Knowlton Complex will headline a new era for Oberlin Athletics.

“[Oberlin] Athletics in general has been on an upward swing for several years at this point,” said Head Field Hockey Coach Anna Baeth. “It’s just nice to have this as a landmark of that upward swing.”

“I think we’ve made a lot of steps in the last few years,” he said. “You’ve seen a lot of programs make important steps from a competitiveness standpoint, and this is giving them even more excitement because this is something even more tangible.”

Athletes have already noticed that their team’s attitudes are different from those of past years.

“Compared to last year, the atmosphere around the [ football] program is totally different,” said Poggiali. “The way we carry ourselves, the standards we hold ourselves to, are different than it used to be.”

The Yeomen football team actually has a new motto on the back of their practice shirts this year: STP, or “Something To Prove.” Poggiali explained that this means proving to the North Coast Athletic Conference, the student body and the Athletics department that they are not to be overlooked, and that they’ve earned their playing time in the new stadium.

In keeping with the spirit of honoring the past while looking towards the future, it’s only fitting that many of the events this weekend are centered around ensuring alumni involvement in the campus’ celebration of the new facility and the school’s new athletic era.

This year’s alumni lacrosse games, along with the Cardinal & Gold Alumni Flag Football Classic, will be taking place on the new Bailey Field in the stadium, giving alumni athletes a firsthand experience of the new venue. In this same vein, student-athletes will also be giving tours of the complex throughout the weekend.

There will also be a dedication ceremony for the complex preceding the football game, as well as a football reunion recognition ceremony during halftime.

The alumni lacrosse game will also honor Linda Donovan, who passed away in March of 2014 and was married to James Donovan, former head men’s lacrosse coach and head football coach.

Linda was a veritable staple in every men’s alumni lacrosse game, and her impact has clearly not been forgotten.

“Linda Donovan was an enthusiastic supporter of Oberlin’s alumni lacrosse game and seemed to know and have relationships with each and every one of the alumni who participated in the game every year,” wrote L. Michael Hankes, OC ’74, in an email to the Review.

The men’s lacrosse program will honor Donovan by naming the annual alumni lacrosse game after her.

“She was loved and respected by all who knew her,” wrote Hankes. “It is most fitting that Linda Donovan’s name will be made a permanent part of Oberlin’s enduring men’s varsity lacrosse tradition.”

It seems that the Austin E. Knowlton Athletics Complex has the potential to truly fulfill the goals framed at its conception on what Winkelfoos called a “historic day” last November.